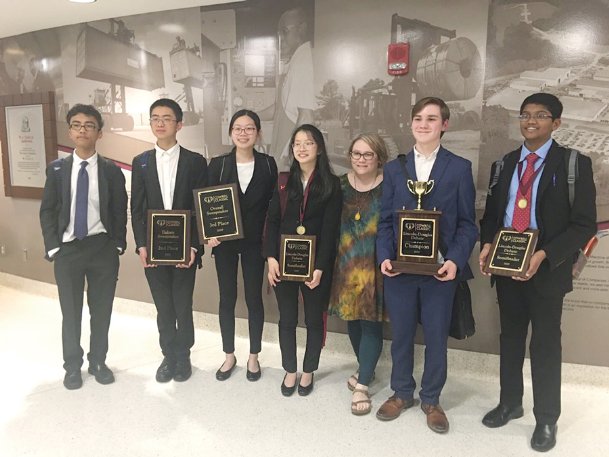 Amy Zhang, third from left, and her Starkville High School speech and debate teammates took home several awards from a competition at Mississippi State University last year. Speech and debate competitions have helped Zhang, now a junior at Mississippi School for Science and Mathematics, build a network of her peers throughout the state. This network helped earn her the position of junior student representative on the state board of education, board member John Kelly said, since one of her responsibilities is to be a liaison between students and the state. Photo by: Courtesy photo

Amy Zhang doesn't quite know what to expect from her first State Board of Education meeting today, she said.

The junior at Mississippi School for Mathematics and Science has been going through training and watching videos from previous board meetings to prepare herself to be the latest student representative, a non-voting member of the board providing input on the board's policy decisions that affect every public school student in the state.

"I'm just looking forward to experiencing my first meeting and learning about the board of education and the different policies they'll be discussing, and I'm excited to hear the other board members' opinions," said Zhang, a Starkville native.

Zhang is one of four area students so far with a voice at the state level of education policy. Christian Dunne, also a junior from Starkville, was appointed Zhang's alternate representative in case she is unable to finish her term.

Eight more of the 26 applicants for student representative made the semifinal round after an interview, board member John Kelly said. Those ten semifinalists -- including Zion Johnson of Columbus and April Guo-Yue of Starkville -- will serve on the state superintendent's student advisory council, a program also in its second year.

The council of students from all over the state offers advice and opinions to state superintendent Carey Wright and serves as liaisons between the Mississippi Department of Education and their fellow students, a role they share with the student representatives on the state board.

Last year's advisory council had 83 members, none from the Golden Triangle. MDE director of communications Patrice Guilfoyle said the board is still choosing the rest of this year's council from more than 300 applications.

Kelly became interested three years ago in adding student representatives to the board of education after discussing the possibility with his counterparts in other states at a national conference, he said.

"It sounded so appealing to me, knowing that we had bright young people in the state of Mississippi that could very well do that," Kelly said.

Fourteen other states have student representatives on their boards, Kelly said, and Mississippi became the 15th despite not having a provision in its state constitution for the governor to appoint these representatives. Making them non-voting members was the way around it, he said.

Student representatives must be in good standing at a Mississippi public high school with a grade point average of 3.0 or higher, experience with volunteering and community service and involvement in extracurricular activities. The application process includes three letters of recommendation and an interview with the state board's School Performance and Accountability Subcommittee.

Six of this year's 26 applicants came from the Starkville-Oktibbeha Consolidated School District, since counselors and administrators there strongly encourage students to apply, Kelly said.

"They've been very aggressive about putting people in the (applicant) pool, but not only that, they've had very good candidates as well," he said.

One of the board's goals for the superintendent's student advisory council is to select students from a variety of backgrounds, regions and school sizes. Wright could not be reached for comment by press time Thursday, but she said in 2019 that she was "looking forward to hearing directly from students on issues of importance to them," according to the press release announcing the first advisory council.

The local members of the council said they share that excitement to have those discussions.

"I have a great motivation for education in Mississippi, and I believe this opportunity allows me to make a change that's bigger and broader, as (just one) student at Columbus High School," Johnson said.

Johnson and Zhang both said they are already brainstorming topics of discussion to bring to advisory council meetings.

Zhang's involvement in speech and debate at Starkville High School for two years helped her build a network of friends and connections throughout the state -- which Kelly said made her application for student representative stand out among the others -- and she said she has heard concerns that some schools have not followed proper safety procedures as they reopened their doors during the ongoing COVID-19 pandemic.

"By the time the student advisory council meets, I'm hoping that everything will have settled down in that regard and that schools will be following these guidelines, but if not, that's definitely something I'll bring up," Zhang said.

She also wants to discuss the availability of academic opportunities, such as Advanced Placement classes and dual enrollment, since some of her acquaintances are frustrated that they do not have those options at their schools, she said.

In addition to speech and debate, Zhang has been involved in the annual National History Day competition as well as the Starkville Mayor's Youth Council and Oktibbeha Young Leaders. She achieved a perfect score of 36 on the ACT on her first try in early 2019.

She also started an online reading club for Starkville elementary schoolers earlier this year to make sure their education did not suffer during the pandemic, she said.

Dunne and Johnson have their own lists of activities: both serve on their schools' student councils, play sports and sing in their school choirs.

"It can be easy to only interact with one group of people, but the important thing for representing a big group is to talk to different groups of people and (get) different perspectives," Dunne said.

Zhang has encouraged her and Dunne's peers in Starkville to reach out to them with concerns and opinions to bring to the state, and Dunne said they have not heard from anyone so far.

"It's big-picture stuff that we're going to talk about, that's always been talked about, (such as) how to make people yearn for education and not see it as a requirement," he said.