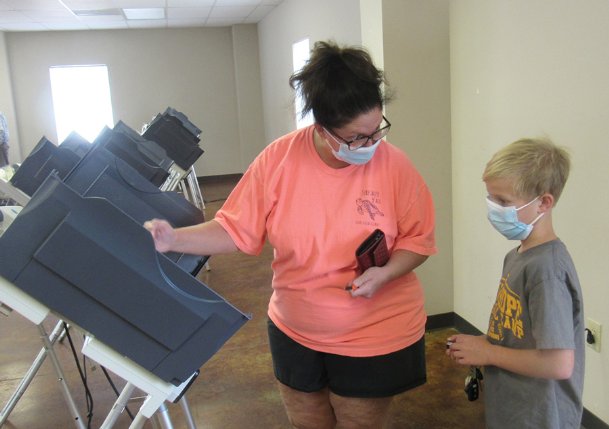 Angela Howe used her visit to New Hope Community Center to vote in Tuesday's special election as an opportunity to show her nephew, 10-year-old Brett Beaird, how the voting process works. Howe said she believes election officials have done a good job in making voting safe during the pandemic. Photo by: Slim Smith/Dispatch Staff

Kaye Truitt casts her ballot in Tuesday's special election at New Hope Community Center. Despite safety precautions put in place due to COVID-19, Truitt said she would much prefer to vote absentee and fears that the anticipated heavy turnout for the Nov. 3 election will compromise safety efforts and put people at risk.
Photo by: Slim Smith/Dispatch Staff

Among the new features designed to protect against COVID-19, election officials at New Hope Community Center handed out pens that can be used as a stylus to cast their votes instead of having voters use the stylus attached to the voting machines.
Photo by: Slim Smith/Dispatch Staff

Diane Wall, left, and Renee Ellis, second from right, vote at the Starkville Sportsplex in Tuesday's special election for state Senate District 15. Ellis' husband Tyrone, right, said the safety precautions such as protective face coverings, social distancing in lines and several bottles of hand sanitizer made him feel safe voting and likely will in November as well.
Photo by: Tess Vrbin/Dispatch Staff

A sign on the door of the National Guard Armory on Highway 12 in Starkville encourages voters to wear protective face coverings to curb the spread of COVID-19 during Tuesday's special election for state Senate District 15. Poll workers cannot require voters to wear masks or implement any other rules that restrict the ability to vote, poll worker Laroy Rushing said.
Photo by: Tess Vrbin/Dispatch Staff

Voters line up at a safe distance around noon Tuesday in the Starkville Sportsplex to cast ballots in the state Senate District 15 special election. Poll workers said safety measures including social distancing and plexiglass shields between poll workers and voters will be in place again in November for the general election, which will generate a higher turnout.
Photo by: Tess Vrbin/Dispatch Staff

Changes made in response to COVID-19 were apparent even before voters entered New Hope Community Center to vote in the District 37 House of Representatives special election.

A poll worker stood outside the center, handing pens to each voter. The pens, he explained, could be used as a stylus to vote rather than use the stylus attached to the voting machine.

Inside, "six feet separation" signs were placed on the floor in front of the three sign-in tables. Plastic partitions separated workers from voters. Hand sanitizers were available at each table as well.

Poll workers encouraged voters to wear masks but did not require it.

By 11 a.m., 318 people had voted at the center, so social distancing didn't produce much of a problem. According to the Lowndes County Circuit Clerk's office, more than 5,000 voters are registered to vote at the location.

"It's been pretty smooth,'' said poll worker Lee Roy Lollar. "We've been under this COVID requirement for what, nine months? I would say that it's no different now than it's been before. People are used to it. We've had no problems and no complaints. People aren't staying to socialize as much as they used to, but that's about the only difference I've noticed."

By its nature, special elections produce low turnouts, so to what degree Tuesday's District 37 election (2,840 votes cast in parts of Lowndes, Clay and Oktibbeha counties) is a preview of what to expect Nov. 3, when turnout will be high for the presidential election, is open to speculation.

Angela Howe, who brought her nephew with her to vote at New Hope, was reassured by the safety precautions. Kaye Truitt, who said she timed her arrival at the same location to avoid whatever crowding there might be, was decidedly not reassured.

"I totally believe that if you can go other places with your mask on, you can come vote with your mask on," Howe said. "I feel very safe. If it's like this in November, I'll have no problem with it whatsoever."

"I think it's ridiculous that we have to come here, given the current situation," Truitt said. "I would have preferred the opportunity to vote absentee, either in person or by mail, but I don't meet the requirements. I wish we had that opportunity.

"I know (election officials) are doing what they can," she added. "This wasn't a highly-publicized election. If it's like this in November when we know there's going to be a big turnout, it's going to be horrendous."

The safety precautions found in New Hope were common at polling locations across Oktibbeha County as well.

Polling places in southwestern Starkville and rural Oktibbeha County, where citizens cast their ballots in the state Senate District 15 special election, provided Q-tips instead of styluses for the voting machines. Election officials there also put tape on the floor to mark six feet between people waiting in line to vote, which came in handy around noon at the Starkville Sportsplex when one of the lines stretched halfway across the basketball court.

Tyrone Ellis, a former state representative, said he was the 292nd voter in that line since the polls opened, and "it seemed like a good turnout for 12 o'clock."

Safety precautions also included bottles of hand sanitizer throughout the room, plexiglass shields between poll workers and voters and signs at the doors encouraging voters to wear protective face coverings.

"It's good that we're having this special election because it gives us a chance to exercise the new procedures," said Laroy Rushing, a poll worker at the National Guard Armory on Highway 12.

"If you put it out there that it's safe to (vote), that's going to make it a lot easier," Ellis said.

The polling places will likely have twice as many voting stations and poll workers in order to move people in and out of the polling place more quickly, District 1 Election Commissioner Greg Fulgham said.

Turnout on Tuesday appeared "slow, but decent for a special election" by 1 p.m., Fulgham said.

Mary McCoy said she felt comfortable voting in person on Tuesday, but she plans to vote absentee in November.

"With the larger numbers of voters, I'm going to be casting an absentee ballot," McCoy said.