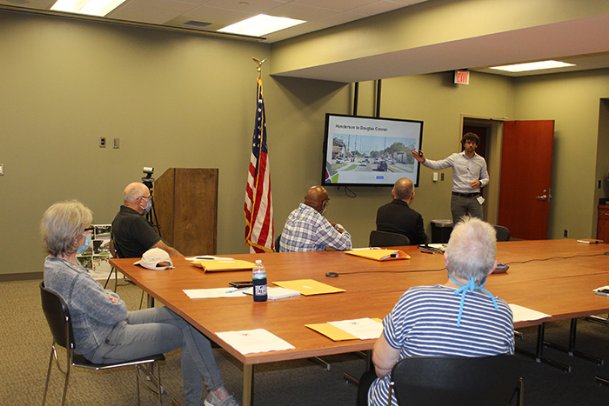 Kimley-Horn engineer Clark Bailey, right, project manager for the planned $15.8 million revamp of a mile of Highway 182, presents the preliminary design plans to Mayor Lynn Spruill, left, and the Starkville aldermen at Fridayâs work session. The designs vary throughout the project based on land use ordinances, the widths of the roadway and the potential for greenery. Photo by: Tess Vrbin/Dispatch Staff

STARKVILLE -- The multimillion-dollar makeover of a mile of Highway 182, from Long Street to Old West Point Road, will be completely designed and ready to bid in a year, project manager Clark Bailey of the Kimley-Horn engineering firm told aldermen at their Friday work session.

The city's Fiscal Year 2021 budget, approved Sept. 1, includes a match of more than $3 million for the grant, bringing the project's total budget to about $15.8 million.

The project must be fully accepted and approved by the Mississippi Department of Transportation by September 2021. The preliminary engineering phase is nearly complete so Kimley-Horn can start its official design plans, Bailey said.

"We've got a clock running, at least a virtual one, and we're down to less than 12 months," he said.

Kimley-Horn has divided the stretch of Highway 182 into sections based on the different widths of right-of-way and the land uses permitted in the city code, Bailey said. One of the goals for the westernmost section, from Long Street to Henderson Street, is for it to be safe to bike on both sides of the road, partly for potential bike traffic to and from Henderson Ward Stewart Elementary School.

The section between Henderson to Dr. Douglas L. Conner Drive will have a narrower roadway to encourage people to drive slower and trees on both sides of the road to "soften up a pretty hard landscape," Bailey said.

The "core" of the project is the section between Dr. Douglas L. Conner Drive and Jackson Street, which allows multi-story buildings and could eventually have "a real urban feel," Bailey said. It will be the only portion of the street to have two lanes for each direction of car traffic.

North Lafayette Street meets Highway 182 in the center of the entire project, what Bailey called the "crescendo." Starkville Electric strung 900 LED lights across one block of South Lafayette between Main and Lampkin streets earlier this month, and Mayor Lynn Spruill said she hopes to extend the "Lights on Lafayette" all the way to the Highway 182 intersection.

The section from Jackson Street to Montgomery Street will be narrower due to the houses on the south side of the road, and the project will remove some utility poles between Montgomery Street and Old West Point Road.

The project will install four distribution power circuits and one transmission circuit to allow three communication companies to provide power to the area, and the new utility poles will be 60 to 90 feet high and about 500 feet apart, Bailey said.

"That's about one pole per block, and instead of having that visual clutter, the wire that's hanging is way up high, so it's out of the way and it doesn't prevent us from having trees," he said.

Additionally, the board seeks to partner with Oktibbeha County and Mississippi State University to seek grant funding for a multi-use path connecting College View Drive to the east end of the BUILD project on Old West Point Road.

The city, county and university have partnered to obtain Transportation Alternatives Project (TAP) grants multiple times in the past to make foot travel easier between MSU and Starkville.

The entire project is estimated to cost a maximum of $1 million, according to the agenda documents, and the city, county and university will cover 20 percent, or $200,000 divided evenly between all three.

The board's vote of support for the partnership is on the consent agenda and will pass without debate on Tuesday.

The board will also consider some changes within the city fire, police and community development departments.

City officials have agreed to transfer the code enforcement division from the community development department to the police department. The division would fall under the umbrella of community-oriented policing, which also includes animal control, parking enforcement and the DARE program.

Spruill said the move was her idea, and Ward 5 Alderman Hamp Beatty said having a code enforcement officer in a police uniform lends weight to the role.

"It's a good merger for the broken-windows theory of being able to help address community concerns and have a single point of contact for the city," Ballard said.

Another interdepartmental shift is the proposed hiring of Stein McMullen, a fire marshal with the Starkville Fire Department, as the building inspection officer in the community development department. He will still have some responsibilities to SFD as a fire marshal.

The changes to SPD and SFD are on the consent agenda, but the board will discuss a proposed restructure of the sanitation and environmental services department in response to changes in the department's duties. The restructure would create " leaner, more efficient work crews and a higher emphasis on planning and communication" and save the city $38,200 per year, according to the agenda documents.

One impending change is the suspension of the city's recycling program starting Oct. 1, which the board will also discuss Tuesday. The board eliminated curbside recycling pickup in March to keep workers safe during the COVID-19 pandemic and later decided to cut the program, which operated at a loss, from the city's budget entirely.