'Only with the hand of God': Lake Charles area begins arduous recovery from Category 4 storm 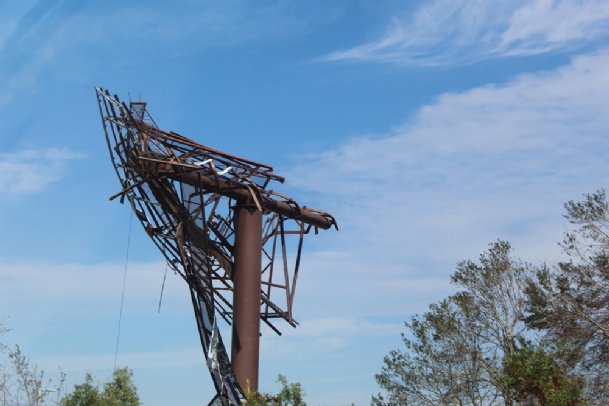 A mangled billboard off Interstate 10 in Lake Charles, Louisiana, barely hangs onto its perch. Highway signs as far as 27 miles outside the city limits were destroyed by Hurricane Laura. Photo by: Ben Portnoy/Dispatch Staff

Sherian Powe, left, and husband Mike walk through their backyard in Westlake, Louisiana. The Powes did not evacuate ahead of Hurricane Laura and rode out the storm in a hallway in the middle of their house.
Photo by: Ben Portnoy/Dispatch Staff

Westlake's welcome sign reveals previous posters below it after suffering damage at the hands of Hurricane Laura.
Photo by: Ben Portnoy/Dispatch Staff

Leroy Bryant was in his home when the back bedroom caved in due to hurricane-force winds. This is what's left.
Photo by: Ben Portnoy/Dispatch Staff

Editor's Note: A Dispatch reporter rode down on Sunday with an Oktibbeha County resident who was helping with relief efforts in the Lake Charles, Louisiana, area to speak with residents and others about Hurricane Laura's impact.

Sherian Powe sits on the foot of her black leather sofa and clutches the gold cross dangling around her neck.

With a lump forming in her throat, she peers toward the roughly seven-by-four-foot hallway between the bedrooms in the back portion of her two-story home off Old Spanish Trail in Westlake, Louisiana. The passageway is small, almost nondescript relative to the rest of a house affixed with family photos and a scattering of crucifixes on its walls.

It's in this ordinary crevice, marked only by a framed copy of the Ten Commandments hanging at chest height, that Sherian, her husband Mike, her 82-year-old mother and her 81-year-old blind father weathered the tenacious and forceful winds of Hurricane Laura as it made landfall near Lake Charles, Louisiana, in the wee hours of Aug. 27.

"Only with the hand of God," Sherian said, shifting into another thought. "We had family up praying."

One door over from the Powes', Leroy Bryant steps out from behind the pile of debris that had served as his home for 28 years. With a pair of clear sunglasses covering his eyes, he speaks in a deep Louisiana drawl.

Having braved Hurricanes Ike, Rita and Katrina in years prior, he felt comfortable remaining in place as Laura bore down on Southwest Louisiana. Huddled in the middle section of his home, Bryant heard the devilish shrieking of the wind as sheetrock was lifted out from the walls in the back portion of the house. Opening the door to what was once a bedroom, he was left looking into his backyard. The entire back half of his home had caved in.

The first signs of the storm-ravaged section of greater Lake Charles rear their heads 27 miles outside the city limits. Billboards advertising fireworks, casinos and restaurants have been shredded by winds that reached 135 miles per hour. Further down Interstate 10 at the Lake Charles East/Iowa KOA Journey campgrounds, the Sulphur Parks Waterpark looks closer to a deserted mine shaft with slides missing whole sections and towers previously employed for sun-soaked fun resting solemnly in the weeds below.

"I actually think it looks like a third-world country," said Roger Latham, a trucker who arrived in Lake Charles from Maryville, Kentucky, to aid in the hurricane relief. "I've done nine hurricanes. I've done Harvey, Matthew -- this one's the (worst)."

'It's a pretty major disaster'

Settled in a massive parking lot next to the Power Centre Ball Fields in Lake Charles' Ward 3, buses from as close as Texas and Mississippi and as far as Ohio and Montana have nestled into a fleet of portable sleeping stations for electrical workers toiling to return power to the area's over 80,000 residents.

Firefighters, utility workers and bus drivers from the Golden Triangle are there, too, each doing their part to kickstart the recovery effort.

Weaving his way through the caravan, Nitetrain Coach Company driver Scott Hoyt, a former member of the 1960s and '70s rock band The Grass Roots, stops for a brief chat. Having given up his music career after his mother suffered a stroke, he's spent the better part of the past two decades shuttling performers across the United States.

But as the country continues coming to grips with the COVID-19 pandemic, music performances have stalled, and the revenue associated with tour bookings has dried. Based out of Nashville, Nitetrain sent an estimated 40 buses to Lake Charles. With local motels destroyed, without power, booked up or combinations of all three, the company's sleeper buses equipped with beds for up to 12 people, televisions and a slew of other amenities serve as an outpost for those working on the front lines of Hurricane Laura's aftermath.

"Some areas look like it's going to be a couple of months before they get electricity," Hoyt estimated. "It's a pretty major disaster."

Carefully stepping over the scattered wires hooked up to a generator on her back porch, Sherian Powe opens the doors to the family's bedrooms. Windows are opened to combat increasing smells of mildew. A bed is pushed back from the wall to give the floor ample space to dry. Cracks have also formed in the ceilings and walls. She gingerly guides her flip-flop clad right foot to indicate where the wooden flooring she and Mike recently added has warped.

In the distance, gas fires from the local Phillips 66 oil refinery burst into the early afternoon sky.

Sunday, the Powes' 40-year-old nephew sat in the hospital hooked to a ventilator after he was found by paramedics with his skin tinged blue trying to let dogs out of a camper. He's not expected to make it.

Standing in his gravel driveway, Bryant runs his fingers down the right arm of his sunglasses as if to adjust them from the haunting reality of what's become of his home. Along the fence he and the Powes share, a massive tree has been uprooted, crushing half of Mike's workshop.

Uninsured and short on sustainable income at 70 years old, Bryant is thinking about purchasing a modular home with his daughter. The Powes say they're headed for refuge with friends in Vancleave, Mississippi, until the insurance company sends an adjuster to their home. Even the bus drivers gathered near the ballfields aren't sure whether their 30-day contracts will turn into 60 days, 90 days or longer.

"We didn't have anywhere to go," Bryant said of why he chose to stay. "What're you going to do?"

A mangled advertising billboard sits just off Interstate 10, minutes from water's edge, as a harrowing reminder of the previous two weeks. In Lake Charles and the surrounding communities, the water and wind have subsided, but rebuilding has just begun.