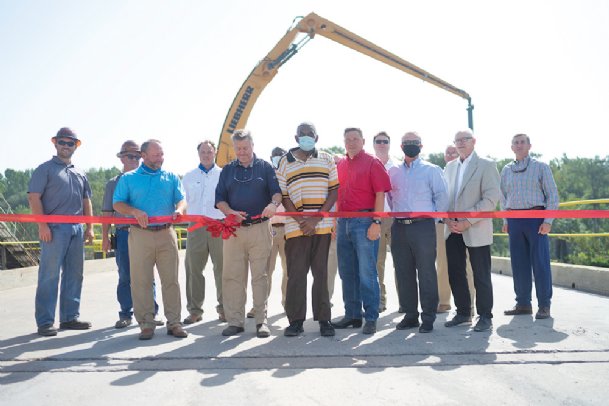 A ribbon is cut in celebration of new equipment for the Lowndes County Port on Thursday in Columbus. The new equipment cost $1.2 million and was funded through a matching grant from MDOT. At more than $700,000, it is the largest MDOT ever granted to the port. Photo by: Antranik Tavitian/Dispatch Staff

"Big" was the operative word Thursday at the east bank of the Lowndes County Port.

Port Authority Director Will Sanders, along with port board members, Tenn-Tom Waterway and Mississippi Department of Transportation officials gathered for a ribbon-cutting ceremony in the shadow of its new material handler.

The big equipment came courtesy of a big grant from MDOT and will have a big impact on port operations, Sanders said.

"We wanted to show MDOT officials what their grant money went to this year, a brand new 110-ton Liebherr material handler," Sanders said in a brief ceremony, attended by about 20 people. "Adding this material handler to our inventory will cut down on our off-loading time and increase production dramatically."

Although MDOT has provided grants to support the port every year, the grant that allowed the port authority to purchase the material handler is the largest single grant in the port's history, Sanders said.

"When most people think of MDOT, they think of highways," Caldwell said. "Transportation infrastructure is much more than highways. A port like this is an integral part of that infrastructure so you try to find a way to improve each piece of the network, whether it's highways, rail or waterways. So when you can get her and be efficiently loaded and off-loaded, time is money. I appreciate the forward thinking of the (port) board in saying, 'We're not going to stand pat on what we have. We're going to make it better.' We're excited to see something like this. It's a good investment."

The new equipment, which has been in use for two weeks, replaces an old material loader that Sanders said will be sold at auction.

"The 100-ton loader we had was built in 1972 and was on its fourth rebuilt engine," Sanders said. "We really needed a more reliable, efficient piece of equipment to take us into the future."

Sanders said that while operators are still familiarizing themselves with the new German-built loader, the off-loading times have already been cut dramatically.

"It used to take seven hours to off-load a barge of rock," Sanders said. "It only took four hours last week."

Use of the equipment, along with the Port's other East Bank facilities, is conducted by the private company Logistic Services Inc. (LSI) under a contract with the port.