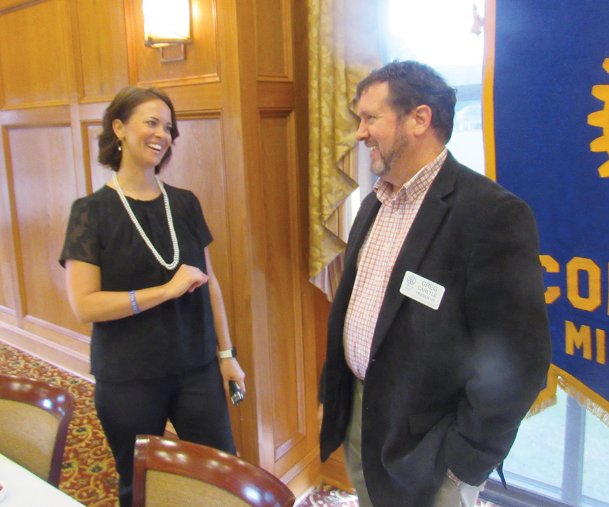 Jamie Grantham of Medical Marijuana 2020, chats with Columbus Rotary Club president-elect Greg Carlyle after her presentation Tuesday at Lion Hills. Grantham used her appearance to inform Rotarians about the two medical marijuana initiatives that will be on the Nov. 3 ballot, arguing strongly for support of her group's ballot measure, Initiative 65. Photo by: Slim Smith/Dispatch Staff

By January, it appeared the time may have come for medical marijuana in Mississippi as the Secretary of State's office certified petitions to permit a ballot initiative to amend the state's constitution.

Initiative 65 would allow residents suffering from any of 22 qualified medical conditions access to marijuana for pain management.

The citizen-led campaign needed 106,000 signatures to qualify for the Nov. 3 ballot and finished with 228,000 signatures, a sign of broad support.

Polling confirmed the popularity of medical marijuana as well. A Millsaps College/Chism Strategies poll showed two-thirds of Mississippians favored joining 34 other states that have already approved medical marijuana. In the poll, medical marijuana was favored across almost all demographics, with the only subgroup opposed being people without higher education.

There is, however, one subgroup that wasn't polled that may ultimately derail the medical marijuana movement.

In March, 106 legislators, mostly Republican, approved a competing ballot initiative -- Initiative 65A -- that supporters of the original initiative say is an attempt to defeat medical marijuana by diluting the vote.

What had looked like clear sailing is now a battle to educate and inform voters ahead of the general election.

Tuesday, Jamie Grantham of Mississippi Medical Marijuana 2020, made the case for Initiative 65 at the Columbus Rotary Club luncheon at Lion Hills Center.

"What I want you to be aware of is these two competing measures," Grantham said. "It's important for everyone to know what the ballot will look like and which initiative is which."

Grantham used a Powerpoint presentation to highlight the differences between the two bills, portraying Initiative 65 as a detailed program based on best practices established by other state's programs, while dismissing Initiative 65A as a ghost program that does not establish a start date, provide legal protections, list qualified medical conditions, provide for regulation or establish a framework for how the program would work.

"Mississippi politicians could have long ago established a program for medical marijuana legislatively, but they did not do so," Grantham said. "Instead, they blocked every proposed bill, more than 20 of them. None of those even made it to the floor for a vote. So not only have they not passed a program, but every opportunity they were given, they blocked it. Fortunately, Mississippi has an initiative process that allows citizens to take the matter into our own hands."

Grantham said under Initiative 65, the medical marijuana program would be administered by the Mississippi State Department of Health, which will license marijuana growers and dispensaries. The program is self-funding, operating through fees charged to license holders. Only those with medical conditions confirmed by a medical doctor would be approved for a Medical Marijuana card which would allow them to purchase up to 2 1/2 ounces of marijuana for a two-week period. Grantham said Initiative 65, if passed, would begin operation in August 2021.

While Initiative 65 allows qualifying patients to use marijuana in multiple forms, including smoking and vaping, Initiative 65A restricts smoking of marijuana to those with terminal illnesses.

"It created a convoluted two-step voting process to confuse voters and deny a fair up-or-down vote at the polls," she said. "Instead of a simple yes or no question, voters have to vote on a measure to approve either both or neither initiatives. If you vote "either", the second question asks which initiative you support."