Airbus builds first of 16 helicopters for Customs and Border Protection 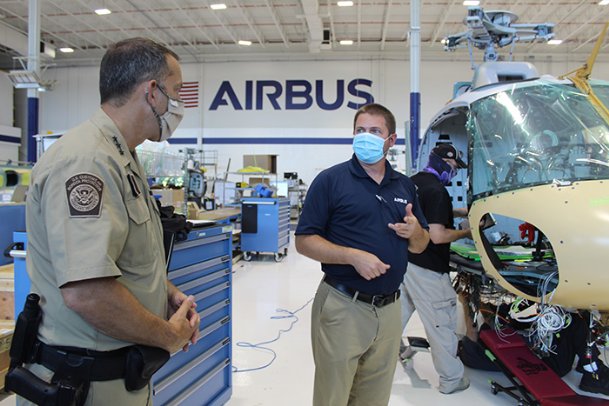 Deputy Executive Assistant Commissioner of Policy for Air and Marine Operations at U.S. Customs and Border Protection Steve Boyer, left, speaks with Airbus Senior Manager of Industry Troy Ham while Airbus employees work on a CBP helicopter at the companyâs Lowndes County facility on Wednesday. CBP ordered 16 specially-made H125 helicopters from Airbus, the first of which has already been delivered, and the last of which will be delivered in October 2021. Photo by: Isabelle Altman/Dispatch Staff

State Sen. Chuck Younger (R-Columbus) and U.S. Sen. Roger Wicker speak beside an H125 helicopter designed by Airbus for U.S. Customs and Border Protection at Airbusâ Lowndes County facility Wednesday. Younger and Wicker, along with U.S. Rep. Trent Kelly, representatives from theirs and U.S. Sen. Cindy Hyde-Smithâs office and members of CBP, toured the facility Wednesday to meet employees and observe the process of assembling the helicopters.
Photo by: Isabelle Altman/Dispatch Staff

An H125 helicopter specifically designed for U.S. Customs and Border Protection sits at Lowndes Countyâs Airbus facility on Airport Road Wednesday waiting to be delivered. Airbus has contracted with CBP to design and deliver 16 such helicopters â the first of which has been completed and is already being used for CBP operations â over the next 14 months. A congressional delegation and members of CBP toured the facility Wednesday in celebration of the helicopters.
Photo by: Isabelle Altman/Dispatch Staff

The first H125 helicopter assembled at Airbus' Lowndes County facility for the U.S. Customs and Border Protection has already been delivered to Detroit, Michigan, for CBP agents to use during operations.

Over the next 14 months, local Airbus employees will build and deliver 15 more as part of a long-term fleet upgrade initiative for CBP.

"Customs and Border Protection ordered 16 helicopters to start replacing their aging fleet of helicopters, some of which are 30 years old," Airbus CEO Romain Trapp told The Dispatch on Wednesday. "So what we are celebrating here today is the beginning of the delivery of these 16 helicopters."

The helicopters are custom-designed specifically for CBP, and Trapp said they include features specially tailored for law enforcement, such as loud speakers, infrared cameras and searchlights "which are needed for the missions of CBP, which every day are about protecting people and chasing the bad guys."

Legislators including Rep. Trent Kelly, Sen. Roger Wicker and state Sen. Chuck Younger, along with CBP officials visited Airbus in Columbus Wednesday to tour the facility and meet with employees. U.S. Sen. Cindy Hyde-Smith was also on the program but had to cancel at the last minute due to a family emergency.

"We are here today to make a statement to you, these teammates and these people that make America work, that we are committed to this aircraft," Wicker said in an address to employees. "We are committed to production and we're doing it for the right reason. We love employees. We love jobs in Mississippi and jobs in America. But the main point we're making is this aircraft is essential to the security of the United States of America, and we all benefit from it."

"We use this fleet every day," he said, "in everything from narcotics operations to national events like the Super Bowl."

He and Executive Director of Operations, Air and Marine Operations Dennis Michelin said the new helicopters provide security for agents on the ground during investigations and operations. Kelly, in his remarks to employees, added CBP's helicopters have been used in search and rescue missions in remote areas near the border as well as for patrol and other law enforcement procedures.

"It's just changed the way we do business," Boyer later told The Dispatch. "It's allowed us to work more effectively. It's efficient. It's a safety net for our employees that are on the ground that we've never had before, so it's a game-changer."

Trapp said Airbus will deliver one helicopter a month through October 2021.

Airbus opened its facility in Columbus in 2003 and expanded in 2006. More than 750 employees -- about 40 percent of whom are veterans -- currently work at the facility, according to an Airbus press release distributed at the event.

Legislators said it is Mississippi and the Golden Triangle area's skilled workforce that makes the production of such high-tech equipment possible.

Younger told employees he is proud to have such a "jewel" as the Airbus facility in his district, which not all Mississippi legislators can say.

"This is quality. I wish they would make a pick-up for me on the farm because I don't believe you could tear it up," he joked.

Both Kelly and Wicker said there are pockets of high-tech industry all over the state, but especially in the Golden Triangle.

"You can't get any more American-made than that helicopter here in Mississippi," Kelly said. "... You have technology and defense-driven businesses that are coming to Mississippi."

"Hardly anybody does it better than the Golden Triangle, whether it's training or job creation or industrial recruitment," he said. "... We got drones, we got steel. We got the most sophisticated aircraft in the world."