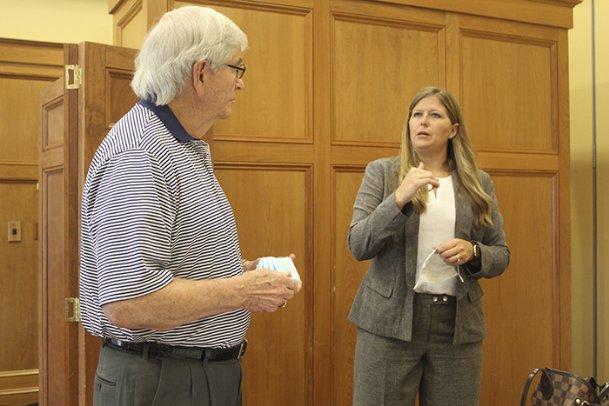 Courtney Taylor, executive director for the Communiversity and workforce training at East Mississippi Community College, speaks with Rotary Club member Bobby Harper after the clubâs luncheon Tuesday at Lion Hills Center. Taylor spoke with the club about the Communiversity commitment to partner with local industries and students and told Rotarians there are 419 students in EMCCâs workforce training program this year, up from 405 this time last year. Photo by: Isabelle Altman/Dispatch Staff

Courtney Taylor had been executive director for the Communiversity and workforce training at East Mississippi Community College for four months before the COVID-19 pandemic forced the college to send all its students home, leaving the brand new 143,000 square-foot advanced manufacturing training center on Highway 82 empty.

"All of a sudden, we're looking at how do we train people in these skilled trades when we can't physically bring them into a building?" Taylor told members of the Columbus Rotary Club during their weekly luncheon at Lion Hills Center on Tuesday. "How do you do that?

"The Communiversity all of a sudden was empty," she added. "We had a few people there, a few of us that wanted to go to work every day because we're sadistic like that. We didn't have any students there. It was just a really weird time."

Though at its core the Communiversity exists to train students in advanced manufacturing skills, Taylor said it also is a "home for partnerships," connecting local industries such as Paccar and Steel Dynamics to the local workforce and connecting high school and college students to EMCC's manufacturing programs.

Reaching those students has been a particular challenge since the pandemic began, Taylor said, since before students could visit the Communiversity. She said her team is currently ramping up marketing efforts and in the process of producing videos about particular job skills that teachers could show their students or that anyone interested could find on Google.

"We hope to, by the time February, March rolls around, to have that bank of 'This is what these people do, and this is how you find it,'" she said.

"One of the things that's fun in (manufacturing) programs like ours is feeling the instructors' excitement and letting them just geek out about their equipment and the opportunities and things like that, and I think that's important for people to feel," she added. "Some of that comes through with a video, but sometimes you put people on camera and they're like, 'OK, this is fine.' And that doesn't really sell to the students, so that's what we're trying to simulate."

That's a work in progress, Taylor said. Right now the Communiversity is primarily working with adults.

The pandemic does not seem to have slowed down training in the Communiversity or EMCC's workforce training program itself, Taylor said. Currently there are 419 students in the program -- up from 405 this time last year.

"If you had told me in June that this would be the case, I would probably have called you a liar," she said. "Because we're very nervous in education because students are very nervous. How do you get people to leave the house when they're scared to death? How do you get people interested in occupations when the world around them is telling them nobody's hiring -- which by the way is not true. People are hiring."

EMCC received just more than $2.1 million in CARES (Coronavirus Aid, Relief, and Economic Security) Act funds, some of which will fund the video production and equipment the Communiversity can use to help students keep social distancing while they're learning in person.

Taylor finished her speech with a personal note about the Columbus community.

"I have never been accepted so quickly in a community," she said. "My husband was military. We've lived kind of all over, and so I think the Columbus region is very very special for that. I know you guys ... reached out really quickly, and I really didn't have a choice but to get connected and get things figured out, so I really appreciate that opportunity to do those things and to really feel settled here so that we could get our horses here."