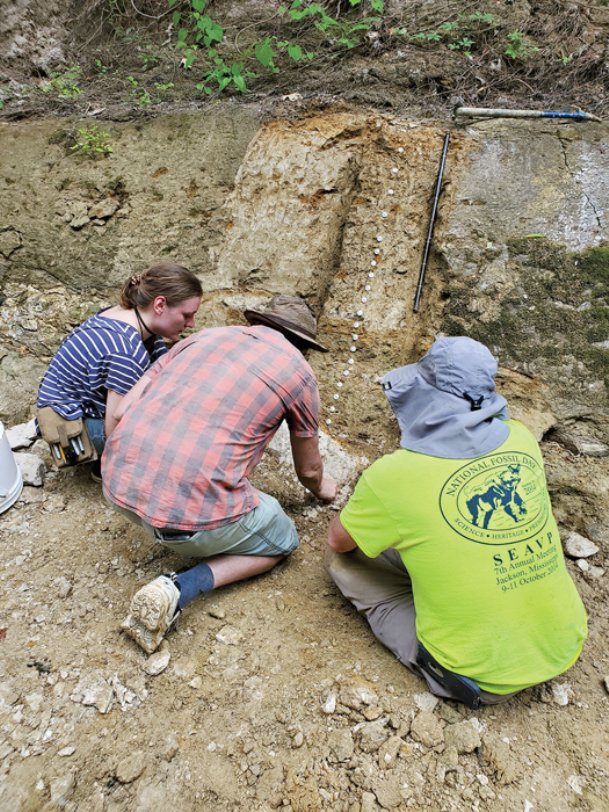 Paleontologists work at a site at a creek off Highway 182 in Starkville earlier this week, searching for evidence of a mass extinction 66 million years ago believed to have been caused when a 10-kilometer asteroid hit the Yucatan Peninsula. Based on the shading of the rock, scientists can tell whether fossils or earth samples are from the Cretaceous Period - before the mass extinction - or the Paleocene Period afterward. The team, made up of scientists from the area as well as Museum of Natural Science in Jackson, American Museum of Natural History in New York, Brooklyn College and the University of New Mexico, hopes their research will help scientists understand more about mass extinction events. Photo by: Courtesy photo

Paleontologists James Witts, of the University of New Mexico, and Joshua Broussard, of Mississippi State University, compare fossils they've found at a site behind an apartment complex off Highway 182 in Starkville Thursday. The scientists hope the fossils can tell them more about a mass extinction event that occurred 66 million years ago and how life in Northeast Mississippi recovered afterward.
Photo by: Isabelle Altman/Dispatch Staff

George Phillips, paleontology curator at Museum of Natural Science in Jackson, searches for 66 million-year-old fossils in a trench behind a Starkville apartment complex Thursday. The site contains rock layers from before and after a mass extinction event 66 million years ago, meaning that Phillips and his colleagues could use it to learn about how life changed after the event.
Photo by: Isabelle Altman/Dispatch Staff

Paleontologist James Witts, a post-doctoral researcher with the University of New Mexico, points at impact spherules, tiny beads of earth found in soil sediments from an excavation in Starkville this week. Originally from the Yucatan Peninsula, the spherules were blasted into the sky by the impact of a 10-kilometer asteroid that hit the peninsula 66 million years ago and caused a mass extinction event that wiped out 70 percent of life on earth. The spherules landed all over the surface of the earth.
Photo by: Isabelle Altman/Dispatch Staff

James Witt, a post-doctoral researchers from the University of New Mexico, displays the fossil of an ammonite, a type of shelled mollusk that went extinct 66 million years ago, at an excavation site off Highway 182 in Starkville Thursday. Witts and other scientists from around Mississippi and the United States are searching for fossils and soil samples around Starkville in hopes of learning more about the extinction, which wiped out 70 percent of life on earth.
Photo by: Isabelle Altman/Dispatch Staff

George Phillips, paleontology curator for the Museum of Natural Science in Jackson, gestures to a site behind an apartment complex off Highway 182 in Starkville Thursday. The site contains fossil evidence of a mass extinction event 66 million years ago. Phillips said scientists can tell whether fossils came before or after the event - believed to have been caused by a 10-kilometer asteroid hitting the Yucatan Peninsula - based on the shading of the rock. The lighter-colored rock which makes up the bulk of the site is from before the event and the darker rock closer to the surface is from after.
Photo by: Isabelle Altman/Dispatch Staff

In a trench behind an apartment complex off Highway 182 in west Starkville Thursday, a team of paleontologists were gathering handfuls of 66 million-year-old fossils.

From fossilized molds of snail shells to evidence of ammonites -- prehistoric shelled mollusks that University of New Mexico post-doctoral researcher James Witts said "looked a little bit like a squid shoved into a shell" -- the group hoped the finds would help contribute to an ever-growing picture of what marine life looked like in the oceans covering what is now Northeast Mississippi millions of years ago.

More specifically, they hoped to learn more about how that life changed after a mass extinction event wiped out 70 percent of life on earth 66 million years ago.

"It's a pretty dramatic change (from Cretaceous to Paleocene)," said Mississippi State graduate student Joshua Broussard, whose research project for MSU geosciences professor Renee Clary is on how life changed during and after the event. "Literally an apocalypse."

Broussard discovered one of the sites the team is excavating -- a creek on private property off Highway 182 -- last fall with George Phillips, the paleontology curator with the Museum of Natural Science in Jackson. Phillips has been working with fellow scientists from American Museum of Natural History in New York, Brooklyn College and the University of New Mexico on projects about the K-Pg boundary for about 10 years. Though they've studied sites around the South and in Mississippi before, this is the first time they've studied the event in the Golden Triangle.

"There are multiple projects, but they all kind of converge on the K-Pg boundary," Phillips said.

Though there are several theories about what may have caused the extinction at the K-Pg boundary 66 million years ago, the most well-known -- and the one Witts, Broussard, Phillips and the rest of the team believe is likely correct -- is that a 10-kilometer wide asteroid hit the Yucatan Peninsula.

"The idea is that this impact happened and it blasted a load of debris into the atmosphere and caused very rapid and sudden climate change," Witts said. "There was maybe a period of global darkness, maybe global wildfires as all that debris rained out back onto the surface of the planet. And of course we're not too far away from that. That's the other side of the Gulf of Mexico, what would have been this shallow seaway here covering Mississippi today. So when that impact happened, you would have had some really catastrophic things happening right here in this sort of locality -- maybe giant tsunami waves, huge earthquakes undoubtedly and then all of this debris raining out of the sky."

It's the event most well-known for wiping out the dinosaurs, but the team said it also wiped out the ammonites and other lifeforms, from microorganisms to larger animals.

The extinction of microorganisms and plants who couldn't photosynthesize with the debris blocking out the sun would have cut off the food supply of larger creatures -- "like kicking out the base of a tower of Jenga blocks," Broussard said.

"Within five minutes the world is changed," Witts said. "This impact event happened, and all these processes that are happening are maybe happening really really quickly."

The sites in Starkville, and particularly the creek site off Highway 182, is exciting for the team because there is so much evidence of the impact. The team has discovered sediment containing impact spherules, small beads of earth originally from the Yucatan which were blasted into the sky at the time of the asteroid impact and then fell to the surface in other parts of the world.

Scientists can also glean information from what they don't find.

"When you look at these rocks (above the K-Pg boundary), you don't find any of these guys. They're all dead," Witts said, holding up a small, fossilized shell of an ammonite found below the K-Pg boundary. "Just a few little species of oyster and a pretty dead sea floor compared to this diversity that you see in these rocks (from) before. That's how life is after ... this extinction.

"You can start to see in higher levels elsewhere how life recovers," he added.

A basic premise of archaeology and paleontology is that the deeper in the earth something is found, the older it is. The scientists can tell where in the earth's crust the K-Pg boundary is because beneath it, the rock is a different shade than above. Scientists hope the differences in the finds from the layers -- those before, during and after the extinction event -- will tell them more about the mass extinctions, but also how life bounces back after one.

That's an interesting question for scientists, because it's relevant to today, when deforestation, climate change and other factors are changing the earth and causing many species to go extinct, the team said.

Phillips said it would be easy to couch paleontology as an "intellectual science" without much bearing on what's going on now. Projects like this prove that's not the case, he said, since they can show how life was affected during times of geologic unrest and climate change.

"If you're studying ultimately something like climate change and other facts of biology in general -- studying extinctions -- paleontology, the study of the paleontological world, the fossil world, is a good way to get a handle on the idea of what's going on today and what might happen with certain changes in the composition of the atmosphere or how we're interrupting the flow of resources in the environment," Phillips said. "Humans are using a lot of resources. I don't want to harp on humans, but we have changed the landscape of the earth a lot."

For example, Witts said, one of the changes likely brought about by the asteroid impact was ocean acidification, which is happening again today, albeit at a slower process.

"There's a lot of concern right now about environmental change and even whether we're going into another mass extinction event and biodiversity crisis, caused maybe by human activities," he said. "By studying these ancient extinctions, we can actually see what happens to life on earth when one of these events happens, when we have a period of biodiversity crisis."

The team, whose last day is today, will take some of the fossils and rock samples back to their respective museums and universities for display or to analyze for microscopic changes they can't see with the naked eye, Phillips said.

The finds will be just one part of the research scientists are doing all over the country to learn more about the event.

"(The partnership) with this group gives me a way to contribute to the big picture," he said.