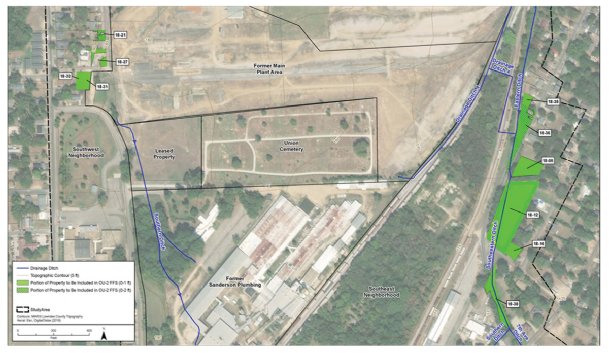 This map provided by the Environmental Protection Agency shows approximately where 11 properties in Memphis Town will have soil removed as part of the ongoing clean-up of the former Kerr-McGee site on 14th Avenue North. Photo by: Courtesy image 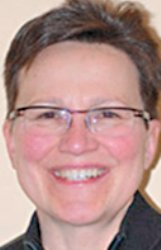 The Environmental Protection Agency has released proposed plans for removing contaminated soil from 11 private properties around the former Kerr-McGee plant on 14th Avenue North, as part of the ongoing cleanup process at the old industrial site.

The properties are mostly residential and located primarily in the area of Shady and Moss streets east of the main site, though there are some in the area of 20th Street North. The property owners have already been notified and met with representatives from EPA and the Greenfield Environmental Multi-State Trust, which is overseeing the clean-up process.

"The plan is to remove, for most of the properties, only the top foot of soil," said Lauri Gorton, director of environmental programs and senior strategist at the Greenfield Trust.

The estimated $2.7 million project is the next part of the multi-step clean-up process for the 90-acre Kerr-McGee site and surrounding area. Kerr-McGee operated a wood-treatment plant at the site from 1928 to 2003, by which time the pollutant creosote, which is used to treat wood, had contaminated the plant site and surrounding area. EPA declared the site a Superfund site, designating it a priority area for clean-up along with about 30 other polluted sites around the country, and designated $68 million for clean-up.

EPA investigators took soil samples from approximately 100 residential and commercial properties around the site and found only the 11 properties specified in the plan had levels of contamination requiring clean-up -- levels which Gorton said are set "pretty conservatively." Remedial Project Manager Charles King said for most of those properties, soil will be removed and taken to the former Kerr-McGee site because the chemical levels are low enough that they are considered appropriate for industrial sites.

Columbus-based construction company J5 has handled the bulk of the clean-up process so far, including the clean-up of the Seventh Avenue ditch and, more recently, the Pine Yard, a 44-acre area on the north side of 14th Avenue where wood was stored during the Kerr-McGee era. The Pine Yard was 96 percent complete in November when work was halted because of weather, according to EPA documents.

J5 is currently working on clean-up of the ditch between Moss Street and Waterworks Road, which Gorton said borders some of the private properties in need of work. Though J5 has not been awarded the bid, the company will most likely handle the clean-up on private properties as well, she said.

Before clean-up can start, EPA must hold a 30-day public comment period for citizens to ask questions and raise concerns with the proposed plan, which King said is required by law for Superfund sites. Because all in-person meetings have been suspended due to the COVID-19 pandemic, King and Gorton said they hope to work with community leaders, such as the Memphis Town Community Advisory Group, to ensure people's questions are answered.

Once the public comment period is over on Sept. 5 and the work begins, officials estimate it will take three to five months to complete.

"After we get comments back, there's a little design process, so it could be three or four months before we start on some of those, and it might be three to five months (after that) before we finish," said King, adding the three-to-five month timeline doesn't necessarily take into account delays due to rain or COVID-19.

Gorton and King also specified they have been working closely with the owners of the 11 properties and plan to have further meetings with them before construction begins.

"Before we start the construction, we'll do a final walkthrough with them physically at the property to make sure, first of all that they understand exactly what we're looking to do and to identify anything that's special that the homeowner might want to protect," Gorton said. "Maybe they put a fountain in their backyard or something. ... At that point we can talk with them just about the schedule of the work. That's the one meeting we have not had yet."

To view the plans on the EPA's website, visit epa.gov/superfund/kerr-mcgee-chemical-columbus. Anyone wishing to comment can write to King at [email protected] or mail to Charles L. King, US EPA Region 4, Superfund Division, 11th Floor 61 Forsyth Street SW, Atlanta, Georgia, 30303.