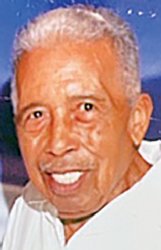 Officially, Murry Anthony was a father of six, but the list of those who considered him a father figure goes far beyond that number. It's easy to understand why.

Anthony, who died Tuesday in Columbus at age 88, possessed all of the qualities and values one could hope for in a dad.

"He was a God-fearing man of great integrity who loved his family and community," said his daughter, Barbara Hyman.

"He was extremely calm and methodical in his thinking," said Lowndes County District 5 Supervisor Leroy Brooks. "He was easy to get along with, very likable."

"Murry was just a phenomenal man," agreed Timothy Bailey, pastor of A Prepared Table Ministries in Columbus. "He had a great spirit. He was always positive. Really, I could go on and on about his integrity and character. His friendship was golden."

Murry lived his entire life in the Crawford area, first farming and later working for the county's road department. His reputation as a hard worker and good neighbor made him one of the most trusted people in the community, so when W.G. "Bit" Thompson retired as the district's supervisor after six terms, Anthony was the obvious choice to fill that position.

In 1992, Anthony was elected supervisor, becoming the first Black supervisor from District 4, and just the second Black supervisor in the county, following Brooks who had served two terms before Anthony's arrival.

Until then, Anthony had shown no interest in running for office, but Hyman said she wasn't surprised when he decided to run.

"He had worked as a road grader for the county," Hyman said. "He knew the work, had done the work and knew the people. It seemed only fitting that he would run for supervisor. All of us children came back and campaigned for him. It was an exciting time."

Despite having more experience in the job, Brooks quickly began to see Anthony as something of a father figure during their time together on the board of supervisors.

"It was a generational thing," Brooks said. "Mr. Anthony was a contemporary of my dad, so our relationship took on a father-son nature. He was also calm, thoughtful. He was constantly giving me advice on being calm and not having a heart-attack about things."

Brooks said Anthony was a great advocate for District 4, but he took seriously his obligation to the entire county in his one term in office.

"He probably would have gone on to serve more terms, but he got caught up in the hospital controversy," Brooks said.

In 1993, a year into Anthony's term, the board of supervisors voted 3-2 to lease the county hospital to Baptist Memorial Healthcare, a decision so disputed that four of the five supervisors - including Anthony - were voted out of office at the end of the term.

"There was a lot of opposition to the hospital decision," said Brooks, who alone survived the political fall-out to retain his seat. "Even though Mr. Anthony and I both voted against it, he got caught up in the politics of it, unfairly, I think."

Anthony's influence did not end with his time as a supervisor, however.

In 2004, Anthony recruited Bailey, then a young Columbus car salesman and lay pastor at a Columbus church, to his church as pastor. A few years later, Anthony was one of nine charter members of a church that would become known as A Prepared Table Ministries, which moved from Crawford to its present site on College Street in Columbus in 2014.

"He was instrumental in my decision to become a pastor and helped build a church that started with nine people into a church with more than 200 members today," Bailey said.

Again, Anthony became a fatherly figure to the young pastor.

"It was a very special connection," Bailey said. "I can't say enough about his role in building the church. I'll always be extremely grateful for his guidance and help along the way. He shared some great management lessons with me, helped make sure we didn't get in over our heads or make any rash decisions. That's just how he was, very thoughtful, very patient. That was something I really needed as a young pastor."

As it was with so many rural people of his generation, Anthony didn't have much education, leaving school after the ninth grade to help out on his family's farm.

"He didn't have much of a formal education, but he had something even more important -- wisdom," Hyman said.

Perhaps because he didn't have the opportunity to continue his education, he was committed to ensuring his children received an education.

"Education was very important to him and he had very high standards," Hyman said. "We had to have As and Bs. He wouldn't accept anything else. He made sure we studied and worked hard in school and took it seriously. We did, too. All of us finished high school in the top 10 in our classes and went on to college and got degrees. We knew that was his expectation for us."

Above it all, Hyman said, her father was a family man and a man of faith.

"He was absolutely devoted to his family," Hyman said. "But he always said God was the head of his household."