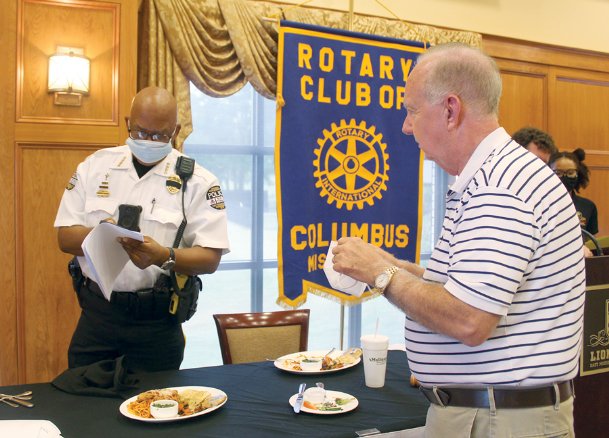 Columbus Police Chief Fred Shelton speaks with Rotary Club member Dr. James Brooks after the club's weekly meeting at Lion Hills Center Tuesday. Shelton spoke to the club about community policing and his plans for a police athletic league, in which officers with play sports with teenagers to foster relationships and help keep teenagers out of trouble. Photo by: Isabelle Altman/Dispatch Staff

Columbus Police Chief Fred Shelton said he can still remember the "watchdog" for his community when he was growing up.

Her name was Ms. Williams and she lived on the seventh floor of his apartment building.

"She would snitch on everybody," he told members of Columbus Rotary Club during their weekly meeting Tuesday at Lion Hills Center. "She would whoop you. And then she would tell your mama and you'd get another whooping."

Still, he said, people like Ms. Williams contributed to a sense of community and, among the local children, respect that he thinks is missing today.

Shelton wants Columbus Police Department -- along with community partners like the Rotary Club -- to contribute to getting that sense of community back by implementing programs to work with kids and families.

Specifically, he said, he wants to start a police athletic league for young people between the ages of 14 and 21. The idea is that police officers would play and coach sports with teenagers and help keep them out of trouble that way.

"That fosters a relationship between the police officers and that family and the community," he said.

He hopes for part of the program to be focused on helping those same young people -- and in some cases, their parents -- learn job skills like how to write resumes, how to dress for interviews and how to fill out applications online.

Many of the details to the program are still being worked out, but Shelton said he hopes to use the old Palmer Home property, which has been sold to Columbus Housing Authority, to host some of the events. The goal is to set up the program by October, though he said the COVID-19 pandemic is complicating that. For example, he's not sure how many kids they can work with at one time.

But with more than 12 million people in the United States in jail, Shelton said he doesn't believe police are solving crime in the country by merely arresting criminals. Instead, police need to be part of crime prevention by being involved in the community, helping kids and helping resolve conflicts in families before they occur.

That's particularly important now as nationwide protests against police brutality in the wake of George Floyd's death have called for changes to law enforcement.

While Shelton said he is against defunding the police, he does think policing needs to change.

"Columbus Police Department, we're ahead of the game," he said. "We've been practicing community policing since 2015."

During the meeting, Shelton also spoke about the issues CPD has dealt with this year, including the need to enforce restrictions set in place to curb the spread of COVID-19. When the pandemic began in March, the city of Columbus temporarily closed businesses and enacted a 10 p.m. curfew. While both restrictions have been lifted, citizens are now required to wear masks in businesses unless eating, drinking or exercising.

It's been a challenge particularly to protect people "who don't want to be protected," he said -- either because they refuse to wear a mask or, during the curfew, they refused to go home.

He said he's increased patrols in the areas where there is most likely to be "partying" and that he and command staff have been patrolling more as the pandemic goes on.

Shelton told The Dispatch after the meeting that while people were in quarantine in March and April, there was relatively little criminal activity. Now that restrictions have been lifted, there has been a jump in crime "as people are getting out and getting more active," he said.

Possibly there is a little more crime this year than there was last year, he said, and he contributes that at least partially due to COVID-19 and how people are letting out pent-up stress and anger brought on by quarantine.

In the county, Lowndes County Sheriff's Office Chief Deputy Brent Swan said law enforcement has also seen an increase in criminal activity as individuals come out of quarantine, though he doesn't think it's necessarily higher than in previous years.

"During the lockdown, I would say violent crime was down a lot," Swan said. "We probably were not as proactive as we are now.

"I think we're probably about average what we normally would be," he added. "Summer time crime rate usually always spikes a little bit because you've got more people out of school, you've got juveniles out of school. But this year's been unusual because of COVID. 2020 has not been a year that you could really use as comparison to previous years anyway."