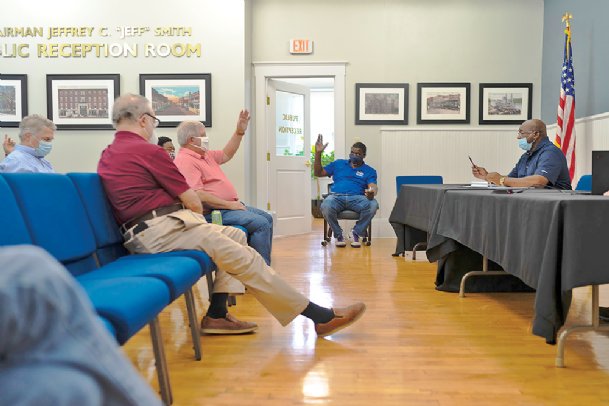 City leaders vote on matters concerning whether to go back to the pre-pandemic work schedule and the hiring freezes for the public works department during a morning meeting on Tuesday at Columbus City Hall. Photo by: Antranik Tavitian/Dispatch Staff

Mayor Robert Smith leads a city leaders meeting concerning the possibility of returning to the pre-pandemic work schedule and the hiring freezes for the Public Works Department on Tuesday at Columbus City Hall.
Photo by: Antranik Tavitian/Dispatch Staff

Columbus City Council unanimously voted Tuesday morning to add 10 full-time employees to the city's public works department, lifting a hiring freeze on the department that was supposed to last through December as a cost-saving measure during the COVID-19 pandemic.

The increased manpower will help address citizen complaints about delays in the department's services, such as grass cutting and trash pickup, said Mayor Robert Smith and council members during the special-call meeting. The decision to lift the freeze early was also prompted by an uptick in the city's monthly sales tax revenue, which they said suggested economic recovery since the pandemic first hit in March.

The public works department is responsible for multiple city services, including street and drainage repair, grass cutting and tree removal on city property and easements, trash pickup and condemned house demolition. But since the city implemented a series of cost-saving measures in April, the department has experienced "tremendous" delays in delivering services to each ward, said Director Casey Bush on Tuesday.

The hiring freeze cut the maximum number of department employees from 64 to 53, he said, and the department has been operating with 51 since. The city also cut department hours from 40 to 30 per week, which he said added to the burden.

"Right now the schedule is trying to do ... three wards in a day, which is hard to try to do with that 30 hours," Bush said. "Right now, we are ... behind maybe three to four weeks."

As a result, multiple council members said Tuesday many residents from their wards expressed frustration about the delays.

"The grass is growing so fast. We are just short of people, we can't get it all done," Box said. "We need to get the city cleaned up again and looking good."

Ward 5 Councilman Stephen Jones told The Dispatch he also received similar complaints. The department tried to keep up with its workload, he said, but sometimes he had to help pick up trash in the ward.

"I've picked up (trash) several times myself in areas, and the next day, it'd be right back there," he said. "So that's going to be a hard problem to fix."

The need for the department to catch up with its workload prompted the council's approval of the additional personnel, Jones said, even though it will generate extra cost to the city. The 10 new employees at the public works department will each work 40 hours a week at an hourly rate of $10.30, Smith told The Dispatch. That will cost the city $4,120 per week and more than $200,000 a year.

"Finances (are) always a concern, but we don't know which way things are going to go," Jones said. "With that said, we still have to maintain the city. People want to see grass cut, they don't like snakes, they don't like grass and things like that."

Smith told The Dispatch he has confidence in the city's ability to shoulder the cost of those 10 new hires, due to an increase in the city's monthly sales tax revenue. The city collected $892,395.40 in June, which is a decrease of roughly $4,000 from last year but an increase of almost $190,000 from the May figure, said Chief Financial Officer Deliah Vaughn at the July 21 council meeting.

"This past month is our second highest month that we've had this year," Smith said. "Our finances have picked back up, and it's not what we thought it would be back when we first presented this (plan)."

Bush said the new hires, as well as going back to a 40-hour weekly work schedule, will help a lot.

The council also unanimously voted to allow most city departments to work a five-day 40-hour week beginning Monday, a shift from its pre-pandemic four-day schedule.

Apart from the police and fire departments, the other city departments have worked 40 hours per week from Monday to Thursday since 2008, said Smith in a Tuesday Facebook post.

As part of the city's cost-saving measures in April, most employees began working 30 hours a week. Police and fire departments' schedules remained the same during the cutback.

"We now see that we can go back to a full-time schedule for our employees and catch up on the work we have fallen behind," Smith said in the post. "We are a service organization, and the regular five-days-a-week schedule will allow us to serve better the citizens that depend on us."