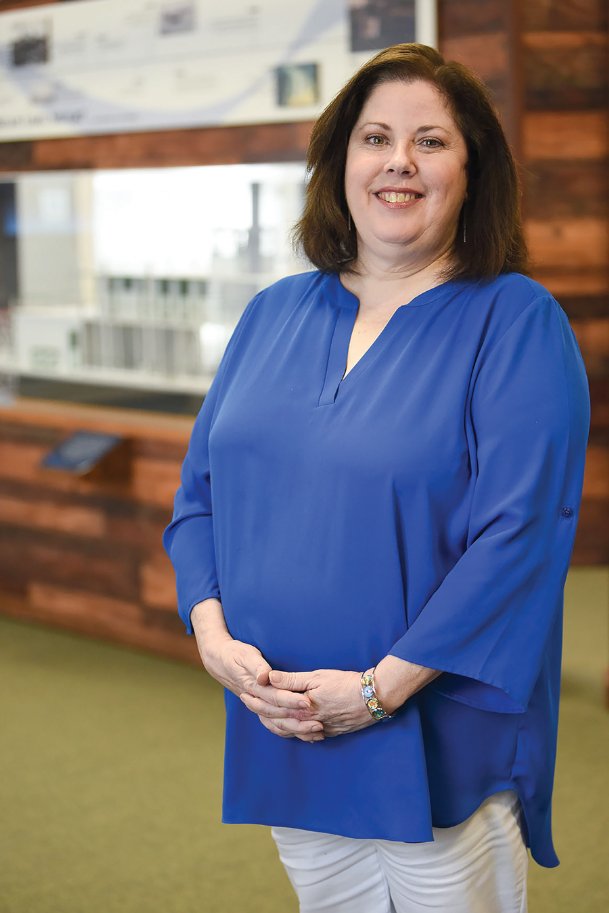 Hope Oakes poses for a portrait on Friday at the Tenn-Tom Waterway Transportation Museum in Columbus. Oakes has been the office manager of the Tennessee-Tombigbee Waterway Development Authority since August 2019. "This is the best job I've ever had," Oakes said. Photo by: Claire Hassler/Dispatch Staff

Hope Oakes looks at a plaque honoring Agnes Zaiontz, who held the office manager position at the Tennessee-Tombigbee Waterway Development Authority before Oakes, on Friday in Columbus. Oakes said Zaiontz pioneered creating the Tenn-Tom Waterway Transportation Museum, and Oakes hopes to continue her legacy by adding to the museum.
Photo by: Claire Hassler/Dispatch Staff

Glass jars are on display on Friday at the Tenn-Tom Waterway Transportation Museum in Columbus. The jars were used during the opening ceremony of the Tennessee-Tombigbee Waterway in 1985. Each jar carried water from each state that has a tributary to the waterway. The waters were combined by turning the wheel and then poured into the Tenn-Tom.
Photo by: Claire Hassler/Dispatch Staff

As Hope Oakes slipped into her chair at the Tennessee-Tombigbee Waterway Development Authority last August, a feeling of anxiousness crept in.

Taking over as the Tenn-Tom Waterway Development Authority's office manager for Agnes Zaiontz -- who had held the post for almost 35 years -- Oakes concedes the shoes she had to fill were big.

Zaiontz had overseen grant writing, accounting, payroll, association management and the development of the Tennessee-Tombigbee Waterway Transportation Museum, among other varying roles, during her nearly four decades in the post and garnered widespread acclaim for her work.

"Agnes was a definite force of nature and she was one of the grande dames of the industry," Oakes told the Dispatch. "So I knew I had some awfully, impossibly large shoes to fill. I made the comment that if I could just fill up her toe space I'd be doing alright."

Taking over for Zaiontz in August following her death last May, Oakes boasted a background in writing. The longtime community editor for the Columbus Packet, she'd spent years telling stories of local citizens in what she describes as "the happy news" of the day.

But as Oakes sought a new opportunity, she found it with the Tenn-Tom Waterway Development Authority.

Overseen by a 26-person board, the Development Authority was established in 1958 by the U.S. government to help ensure the construction of the waterway. Composed of representatives from Alabama, Mississippi, Tennessee and Kentucky -- the four states the waterway weaves through -- it operates as a four-state compact.

Presently, the Development Authority promotes the economic and trade potential of the waterway and operates as the central repository for data and research on it.

For Oakes, one of her first orders of business with the waterway came in helping bring the Smithsonian Water/Ways exhibit to the Tennessee-Tombigbee Waterway Transportation Museum in January of 2019 -- a museum later re-named after Zaiontz. A traveling exhibit produced and paid for by the Smithsonian Institute, it offered onlookers insight into how water has shaped our world.

Following her work on the committee that brought the Smithsonian exhibit to Columbus, Oakes' name was quickly thrust to the forefront of the debate on who could replace Zaiontz as the Development Authority's office manager.

"Mom made a point to introduce me to her and at the museum dedication," Zaiontz's daughter, Cindy DeFelice, told The Dispatch. "And I know that Mom would be so happy that Hope is filling her shoes. I know my mom's got big shoes to fill, but I know that she always spoke so highly of Hope and I know that she'd be very happy."

Now nearing the one year anniversary of her first days on the job, Oakes has been charged with helping to organize the annual Tennessee-Tombigbee Waterway Conference. Having jumped on board just days before last year's conference, the 2020 edition scheduled to be held in Point Clear, Alabama between Aug. 25 and 27 will be a chance to promote the economic and business potential the waterway has to offer.

Given her newspaper background, Oakes has also been able to put her past editorial skills to use -- drafting her own press releases, taking her own photos and more.

Beyond the actual work, Oakes also admits her days are less stressful than her previous time compiling newspaper copy for The Packet. Speaking with the Dispatch last week, she quipped that she often forgets how many hours she's spent at her desk in the Development Authority's offices -- thoroughly enjoying each moment of her time.

"I swear I did not realize how stressed I was," Oakes joked. "I would have said, 'No I'm not stressed.' I started working here and I would run across people and they're like 'Hope, you look so good, you don't look like you're stressed out.' I really had no idea I was looking that bad, but oh well."

Further, her latest position has offered her a chance to continue the work Zaiontz pioneered in a way that those closest to the industry's "grande dame" feel she would have loved.

"Just from the phone conversations and things that we've had since my mom passed, I understand now why my mom liked Hope so much and why she thought so highly of her," DeFelice said. "Because she is such a kind person and she's very very intelligent. She is also a very strong woman and that makes me happy to know that Hope is filling my mom's shoes, because she is very much like my mother in that sense."

Correction: A previous version of this story stated an incorrect number of Tennessee-Tombigbee Waterway board members. This story has been updated to reflect the correct number.