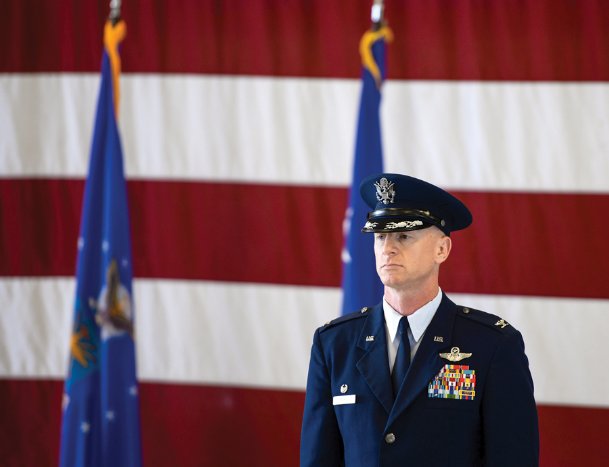 Col. Seth Graham stands at attention during Monday's change of command ceremony at Columbus Air Force Base. Graham takes over as commander at the 14th Flying Training Wing from Col. Samantha Weeks, who has retired. He will assume his duties in July after completing his current training in San Antonio, Texas. Photo by: Courtesy photo/Columbus Air Force Base

Shortly after he was installed as Wing Commander of the 14th Flying Training Wing at Columbus Air Force Base, Col. Seth Graham sent an email to the CAFB Base Community Council, explaining one of the reasons he's most excited about the new assignment.

"I have spent most of my career flying the B-1 (bomber)," he wrote. "Over the years, my passion for flying has slowly been replaced by my passion for Airmen."

Graham was elevated to command at CAFB on Monday, replacing Col. Samantha Weeks, who has retired. But he won't actually assume his duties until July. The wing will be under the command of Vice Wing Commander Col. Dave Fazenbaker until Graham's arrival.

Graham comes to Columbus from his role as vice wing-commander of the 509th Bomb Wing at Whiteman AFB in Missouri, but he is currently working on six weeks of T-38 flying training at Randolph AFB in San Antonio, Texas. Air Force wing commanders are required to train on the same aircraft used at their commands, which Graham thoroughly endorses.

"It really gives you insight into your command," he said.

Despite the age difference (Graham is 47), he said he retains a powerful sense of connection to the young students in his command, most of them in the early 20s.

"On one hand, they're much like my own kids," Graham said. "I have a son who is 21 and a daughter who is 17. That's about the same age group as many of these student pilots."

But any temptation to think of the pilot as "kids" is quickly dismissed.

"You have to fight that thinking," he said, "because these are not your typical young men and women. They've taken a very solemn pledge. It's amazing when you look at the responsibility that they take on, from the machines they operate to the weapons they handle. That sets them apart."

Although he now has 27 years in the Air Force, Graham's passion for flying is something he's held since childhood.

"I grew up in Idaho and I remember when 'Top Gun' came to our theater," he said. "I was 11 years old and from the moment I saw it, I knew that's what I wanted to do. I think that's true of these young pilots, too. For them, what they are doing in Columbus is the fulfillment of a life-long dream, just like it was for me."

That connection to the airmen only grew with his role as a squadron commander in 2013. It was then he began to think of his career in a different light.

"That was the first opportunity I had to influence people's lives," he said. "It was an unexpected discovery to me to realize how much I enjoyed it. People would come into my office and I realized I had the skills and authority to solve their problems. I was changing people's lives. The funny thing is, the problems they had were so small to me, but it seemed insurmountable to them. The idea that I could do something that really made a difference was something that made a powerful impression on me."

Despite 13 assignments across the country and abroad, this will be Graham's first meaningful time in the South.

He's been learning as much as he can about CAFB and Columbus, an effort aided by an old friend.

"I have a bit of a secret weapon, a mentor, who is soon to be a major general. John Nichols." Graham said.

"He's put a lot of effort in helping me get prepared," Graham said. "He's told me so much about the community, the community leaders. That's been a big help."

Although he has yet to meet the new wing commander, CAFB Base Community Council president Chuck Bigelow is impressed.

"Just looking at his background, his intelligence, where he came from, he seems like a great choice," Bigelow said. "Reading some of the things he wrote, he seems to have a good feel for the position. He'll be good for the base."

For his part, Graham said relations between his command and the community cannot be overstated.

"I don't even like to think of it in terms of being the base and the community," he said. "To me, it's one community. We literally could not do what we do without the community's support."