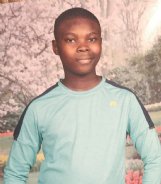 One of roughly 50 students at Cook who worked with Wonder Media's Story Maker software, James's entry -- a character named "Cyber" Sam -- will now become a permanent fixture in the literacy and technology platform that helps teach students the basics of 3-D animation.

"He is sort of a man of few words," Rowland said. "And so if you don't know him, you won't know that he is just thrilled beyond all words, but I couldn't go to sleep afterwards, I was just so pumped."

James' mom, Kenya Barry, said it is great to know her son's talent is recognized.

"Joshua has been drawing since he could hold a pencil so he's a very, very talented artist," she said.

Competing against middle and high school students nationwide, James and his classmates were tasked with submitting a design, backstory and pitch as to why their characters should be included in the Story Maker software -- a program developed by "Rugrats" and "The Wild Thornberrys" creator Terry Thoren.

Wonder Media also asked that students create characters that would "add necessary and productive conflict among the Story Maker characters."

With that in mind, James designed "Cyber" Sam -- a kid who is tech-savvy and enjoys spending time on his hoverboard and sending memes to the limited friends he has.

The character also boasts a speech impediment and cyberbullies others given that he was bullied himself.

"People call me a cyberbully, and that's why I have few friends," James wrote in "Cyber" Sam's biography. "When I text 'mean' things, they're JOKES, but people take 'em too literally. I kinda stutter, which doesn't make me very social, so I type on a device to make up for it. I've been bullied as a kid, and I was called 'nerd', 'geek' and 'smarty head', so I became mean."

Speaking with The Dispatch Sunday afternoon, James said he wanted to make his character a cyberbully because he thought people sometimes forget about it.

"When I was walking around, I was just so excited about all of the students' work," Rowland said. "They all looked so good. And then I came around behind Joshua and I was reading his bio and it brought tears to my eyes -- I was just really excited about reading it. And I thought, 'How could he not win?' Like, could they see this and he not win?"

James' victory in the Create-Your-Own Character contest is the latest installment in CMSD's recent use of the Story Maker software.

Following the 2018-19 use of the program, CMSD students helped animate a rendition of "The Wizard of Oz" that was later played at Malco Cinema in January.

And while the script and characters were created by producers at Wonder Media, students recorded lines for each animation and controlled the characters' movements in the film.

As for James, the program also helped identify a potential career path down the road.

"I plan on making children's books and graphic novels," he said.