Police set up checkpoints to enforce curfew in Columbus 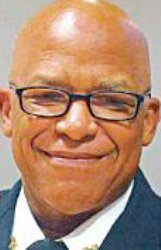 Columbus Police Department will set up checkpoints throughout the city at night to enforce the curfew the city council implemented over the weekend to curb the spread of COVID-19 coronavirus.

CPD Chief Fred Shelton said during a Tuesday press conference that police would set up at various highly-trafficked areas throughout the city. Though he did not go into detail about how many checkpoints would be set up per night or where they would be, he said they would take place between the hours of 10 p.m.-6 a.m., when the curfew is in effect.

"We're only spending about a minute of time to say, 'Hey ... I'm with the Columbus Police Department, may I see your licenses? Ma'am, can I ask where you're going?'" Shelton said. "I'm going to Walgreens pharmacy to get my medication.' 'All right ma'am, have a nice day.'"

The city council unanimously voted to enact the curfew during a special-call meeting Saturday, where it also closed certain "non-essential" businesses, laid out restrictions for others and limited gatherings to 10 or fewer to help curb the spread of the virus. Those who violate the new restrictions are subject to up to a $1,000 fine and 90 days in the county jail.

Shelton emphasized that police would not cite drivers who had a reason for being out, such as going to or from work, the grocery store, pharmacy, laundromat or a restaurant. The curfew is primarily to prevent joyriding or gatherings at night, he said.

"This mainly is to enforce the curfew and make sure people abide by it," Shelton said.

Shelton said Tuesday only one person had been cited for violating the curfew since it was enacted Saturday.

As of Wednesday morning, there are 377 confirmed cases of COVID-19 in the state, including six confirmed cases in Lowndes County. Seven cases have been confirmed thus far in Oktibbeha County with one confirmed in Clay County and one in Noxubee County.

Hinds (38), DeSoto (36) and Harrison (25) counties had reported the most cases in the state. A Hancock County man died in a Louisiana hospital last week, marking Mississippi's first death from the disease to date. Wednesday MSDH reported the second death, that of a Holmes County man. In both cases, the men were in their 60s with underlying health issues.

Nationally, there have been more than 53,000 confirmed cases of COVID-19 and nearly 800 deaths, according to national media outlets.

3. A journey back to the baseball field: For New Hope's Jeremiah Jethroe, scary neck injury changed life in an instant COLUMBUS & LOWNDES COUNTY