Monday Profile: Phinisey turns lifelong love of fitness into inspiration for others 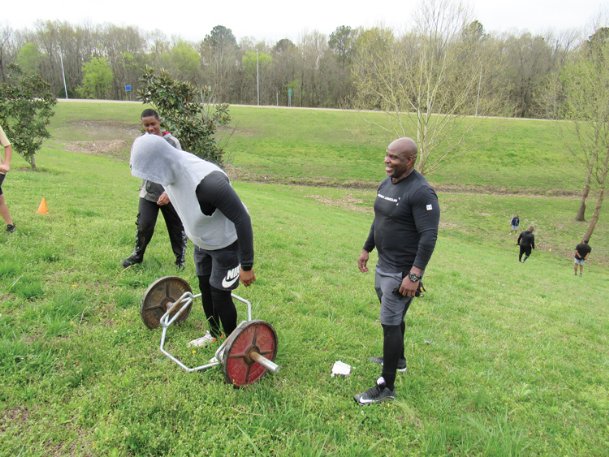 Columbus firefighter Corey Hayes, center, goes through his workout under the watchful and encouraging eye of personal trainer Tony Phinisey during a workout earlier this month. Phinisey likes to use different terrains to push his clients to use various muscle groups in different ways, something he said goes back to his own childhood. Photo by: Slim Smith/Dispatch Staff

Tony Phinisey has been a full-time personal trainer for about three years now, but his passion for fitness goes back 50 years or more.

"You remember Jack Lalanne?" Phinisey asked. "That was my guy, my inspiration."

Lalanne became an American fitness and nutrition guru, largely through his syndicated TV show, which he started at age 37 and hosted for an incredible 34 years (1951-1985). Lalanne continued his personal daily workout routine until his death in 2011 at age 96.

"I remember, when I was just a little kid, his TV show would come on and I'd run to kitchen and grab a couple of cans of my mom's beans and use them for dumb bells," said Phinisey, 57. "As long as I can remember, fitness and living healthy was my passion. I think it's something God put into my DNA."

Phinisey also knew someday he would turn that passion into a career.

By the end of his 32 years with UPS, he was already operating a fitness business on the side, leading a group of men through rigorous workouts on Saturdays, something he still does today.

When he retired from UPS in 2017, Phinisey was at last in a position to turn to personal training full-time.

"About 90 percent of my clients are athletes in training," said Phinisey, who has also worked as the Heritage Academy football program's speed and agility trainer for the past two years. "But I work with people of all ages. It's not the same goal for everybody. What is the same is the potential to be more fit, healthier and take better care of their bodies."

Phinisey said the key to his approach is a "whole body" workout. His Saturday workouts are illustrative of that approach.

"I take them all over town, looking for things that will challenge them in a little different way every time," he said. "That goes back to when I was a kid, too. When I was a kid, one day, it may be at a park playing baseball. The next day it might be swimming or playing basketball. Every day was different and I was using different muscle groups and pushing my body in different ways, even though I wasn't thinking about it."

On a recent Saturday, Phinisey assembled his group of about eight people, from teens to those in their 50s on the side of the Highway 82/Main Street interchange in Columbus, employing the steep hill leading up to the highways as his training ground.

The group took turns pushing a contraption -- two 45-pound free weights attached to an axle and a handle -- up the steep hill, probably 30 yards.

One by one, they took their turns, doubling over in pain and exhaustion as they completed the climb.

Corey Hayes, 37, is one of the participants.

"I've been doing this for a couple of years," said Hayes, a Columbus firefighter. "For me, it's all about taking care of myself and getting in shape and building on it. I could do this on my own, probably, but I don't think I'd get as much out of it if I didn't work with Tony. He has a way of pushing you hard, but it's fun because you know you're getting something out of it."

Phinisey's message -- fitness is for all ages -- is something Hayes tries to take back to the firehouse.

"You know, as you get older, it's easy to sort of slack off," Hayes said. "So what I've been trying to do is get the guys up and moving. It's not hard stuff. It might be just playing a game of horse, anything to get people off their feet and using their bodies."

With an eye toward turning his passion into a profession, Phinisey earned certifications as both a strength/conditioning coach and personal trainer.

"I wanted to do this the right way," he said. "I love doing this, but I'm also serious about it and want to make sure people have confidence in what I'm telling them. I'm always looking for new clients because, believe it or not, I learn something -- some little something -- from every person I work with."