Hotels 'barely keeping the lights on' during outbreak 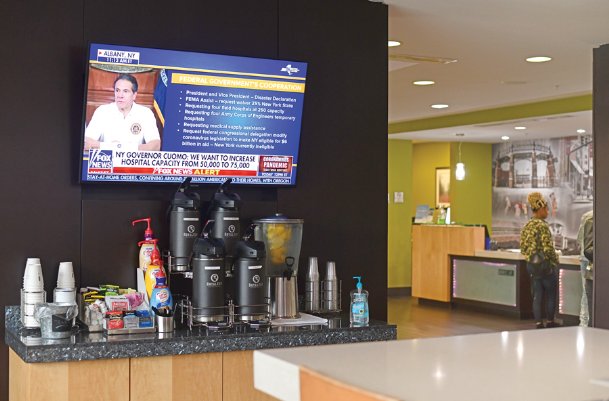 Guests check in to the La Quinta Inn on Saturday in Starkville. Due to COVID-19, the hotel placed hand sanitizer around the lobby and stopped serving dine-in breakfast. They now offer a sack breakfast. Photo by: Jennifer Mosbrucker/Special to The Dispatch

"I really had everything mapped out (with) my bills, and now I've got to figure out how I'm going to pay everything," said Smith, a single mother of four.

She used to work more than 40 hours per week and now works about 25 as a housekeeper at LaQuinta Inn and Suites in Starkville. The COVID-19 coronavirus pandemic makes travel inadvisable and all sporting events are canceled for the foreseeable future. Smith and other local hotel employees relied on both for a steady paycheck.

Hotel staffing is mostly based on occupancy, and their workers have either had their hours significantly reduced or been laid off entirely. LaQuinta usually had six or seven housekeepers working at once but now only needs one at a time, and breakfast staff are no longer needed since the hotel serves grab-and-go breakfasts in paper bags now, general manager Jordan Gillentine said.

The hotel is "barely keeping the lights on" less than two weeks after the pandemic shut down sports and restricted travel, he said.

"We're not just forcibly cutting hours to save money," Gillentine said. "There is no demand for the hourly employees. It's a cause-and-effect relationship."

"We're trying to do a lot of deep cleaning and extra work for our long-term employees so they have a steady paycheck until the federal government decides how they're going to help people overcome this," Sethi said. "Our employees are our family and we have to help take care of them as much as we can."

But there is a limit on how much work there is to do and how much the hotel can afford to pay employees when rooms are not being rented, Sethi said. Both of his hotels saw a total of more than $270,000 in canceled March and April bookings from March 14 to Friday, he said.

Sports are hotels' primary financial buoy in the spring, including the NCAA basketball tournament that was supposed to be this past weekend, so the suspension of all sporting events has been "devastating to the entire (travel) market," Gillentine said.

"That was the magnet that pulls all the travelers to town in the spring, and it's gone," he said. "This pandemic and all the closures haven't taken some of our business -- they've taken all of it."

The Starkville Holiday Inn lost about 15 groups, both teams and fans, that would have stayed there for Mississippi State University sporting events, general manager Frederick Chase said.

"We're just trying to stay afloat through this crisis and we're trying to carry our staff through the best we can," Chase said.

John Roorda and his family of five stayed Friday night at LaQuinta on their way home to Iowa from Florida, where they cut their vacation short by one day. He said every hotel he saw had a nearly empty parking lot.

"I've seen it from the Gulf Coast all the way up to here, and it's devastating," Roorda said while packing luggage into his family's minivan Saturday morning.

Tracy Gurdian of Chicago was one of many parents who came to Starkville to help their children move out of the MSU residence halls. She and her daughter also stayed at LaQuinta for one night only, and she said the staff was friendly and the room was clean.

"They have hand sanitizer at the front (desk), but we used precautions and brought our own wipes to wipe down the TV remote and all surfaces," Gurdian said.

If the pandemic and the resulting lack of business last six to nine months, owners and managers will "have some tough decisions to make" about the future of local hotels, Gillentine said.

Kelvin Gaulding, an MSU student who works at the Holiday Inn front desk, said he would have to move back to his parents' home in DeSoto County if he gets laid off.

Smith said she and her children might also have to leave Starkville, where she has lived her entire life, but their next steps would be less stable. Her job is her family's only source of income, and unemployment insurance would not provide the same security, she said.

"I'd have to look for something else, but who knows how long it would take to even get another job?" she said.