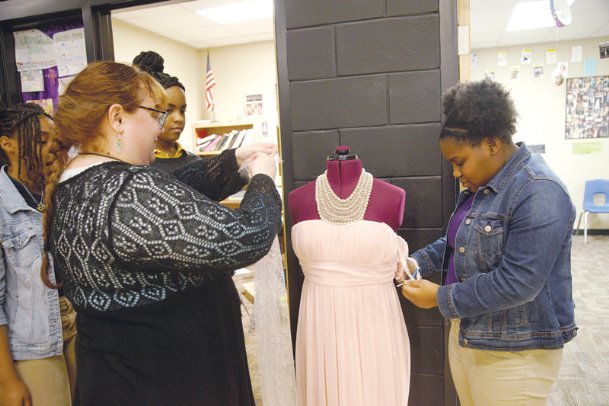 Chelsea Petty, Columbus Middle School drama instructor, helps her students Samara Bowman, Lexy Magee and Laylah Berry design a dress for an upcoming spring musical, "Once on This Island." The students try to make costumes out of used fabrics and build sets on stage by themselves, Petty said. Photo by: Yue Stella Yu/Dispatch Staff

Columbus Middle School students present showcase "Fame Junior" during the Mississippi Junior Thespian Festival a few weeks ago in Pearl. The showcase won them the Spirit Award at the festival.
Photo by: Courtesy photo/Chelsea Petty 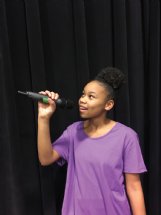 Sometimes, when he played Othello on stage, Khye Hairston couldn't stop crying even after the scene was over.

Because as Othello, the 14-year-old Columbus Middle School student said, he had just wronged and smothered Desdemona, the love of his life.

"(You feel) betrayed, you feel anger, sadness, confusion," Hairston said. "At times, I ... actually feel like I was him."

Hairston's acting scored him "Superior" -- the highest rating one can get -- at the Mississippi Junior Thespian Festival late January. He was one of the nine CMS students who received that rating at this year's event, which is record-breaking for the school, said CMS drama instructor Chelsea Petty. A total of 25 CMS students performed at the festival, she said.

"We quite frequently get Excellent," Petty said. "But Superior means ... you are just dang near perfect. We've never gotten that thing till this year."

Those who scored "Superior" in the festival, she said, get to compete at an international level later this year in Indiana.

"I was just so excited (about the trip)," Hairston said. "I've never been up north before."

The festival, which took place at Pearl High School in Pearl, was hosted by Mississippi Thespians, an affiliate with the Educational Theatre Association that hopes to enrich students' experience with theatrical performances.

Only students who have completed 100 hours of theater work are allowed to become Thespian Society members and participate in the festival, Petty said.

Hairston's older sister, Kayla Hairston, used to be a Thespian Society member too, Petty recalled. Kayla's performance was what brought her 6-year-old brother to the auditorium for the first time eight years ago, she said.

"He had little braids," Petty said. "He sat (in) the front row, and he couldn't reach the floor. He was swinging his legs.

"I said, 'Are you Kayla's little brother?'" Petty said. "And he said, 'Yeah. And I'm gonna be on the stage someday just like my sister.'"

Hairston, who followed his older sister's path, is who Petty would call a "legacy kid." And he is not the only one.

Jada Spraggins, 13, loves to sing. As a second-grader, she became interested in theater after seeing her older brother perform.

At the festival, Spraggins performed "I know the Truth" from the Broadway musical "Aida," which won her a "Superior" in Solo Musical. And she was emotional on stage, she said, thinking about how the character she played had to marry a guy who cheated on her with another woman.

"I just feel like I have to be this girl with all this sadness," she said. "I just have put my all into that."

At the festival, students also took home the Junior Thespian Festival Spirit Award for their performance of "Fame Junior," which has now become their signature song, Petty said. The school also won the title of the 2019-2020 Model School for Arts Education.

CMS was also the only school with students competing in any technical categories at the festival, Petty said. That includes costume design and stage management, the latter of which won a "Superior" for the school.

That accomplishment has its roots in training students are already receiving through daily operations at the theater.

Students try to build the sets on stage by themselves, and some learn how to tailor-make a dress they got at the Palmer Home thrift store into one that fits the actress, Petty said.

"It's very hard to have middle schoolers do tech," Petty said. "(But) I want them to know theater's more than just acting on the stage. It's more than just singing and dancing. There's so much more to it."

To pay for the bus ride to the festival, Petty and the students held fundraisers, selling candles and theater tickets. They ended up receiving roughly $4,000, Petty said. For students who scored "Superior" to travel to Indiana, however, they would have to raise much more, she said.

CMS principal Kim Gardner said she tries to support Petty whenever she needs help with organizing the fundraisers and selling theater tickets among students.

"We build in time where students can get out of class," Gardner said. "And trust me, they enjoyed that part.

"Whatever she tells me she needs," she added, "we desperately try to make that happen."

"We're happy about our students having an opportunity to compete in something that they love," Labat said.