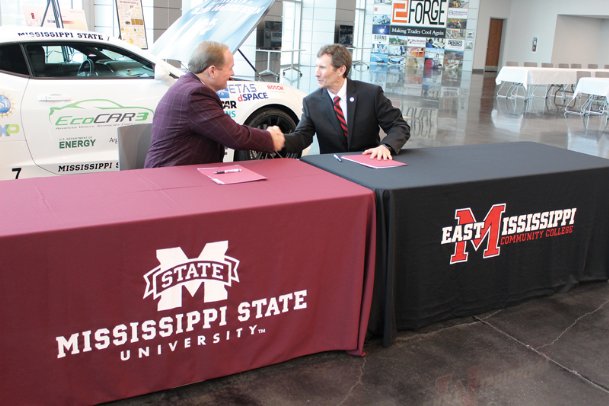 Mississippi State University President Mark E. Keenum, left, and East Mississippi Community College President Scott Alsobrooks shake hands after signing a memorandum of understanding for MSU's Bachelor of Applied Science program Wednesday at the Communiversity on EMCC's Mayhew campus. Students with an associate's of applied science degree will not have to repeat any previous credit hours in order to complete a bachelor's, which will make it easier for them to advance in the workforce, Keenum said. Photo by: Tess Vrbin/Dispatch Staff 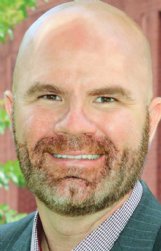 Sixteen students enrolled in Mississippi State University's Bachelor of Applied Science program this semester, even though MSU had barely promoted the brand-new degree track that launched in fall 2019.

That's because someone with an associate's degree in applied science does not have to repeat any credit hours in order to receive a bachelor's in the first-of-its-kind program, said Terry Dale Cruse, associate vice president and head of MSU's Meridian campus.

"There were conversations we've had before where a student would come in with a certain amount of technical credits and really wanted to earn a bachelor's, but when they saw they were going to have to repeat some of those hours, the student would decide they didn't have the time or the resources to do that," Cruse said. "This is a real game-changer (for them)."

The BAS program accepts all 45 technical credit hours of a 60-credit, two-year associate's degree, as approved in August by the state Institutions of Higher Learning board. BAS students can take classes in Starkville, in Meridian or online. The online option allows students to simultaneously contribute to the workforce and pursue a degree instead of forcing them to choose between the two, Cruse said.

Upward mobility in the workforce without a bachelor's degree can be difficult and sometimes impossible, so the BAS will "prepare (students) for roles of leadership and allow them opportunities for promotion within their organization" in addition to giving them technical skills, Cruse said.

The program is available to any incoming student who has or is pursuing an associate's of applied science, but MSU is working to formalize partnerships with all 15 community colleges in Mississippi so students in technical education programs can transition directly into the BAS program if they choose. East Mississippi Community College became the fifth institution on Wednesday to establish this partnership.

EMCC President Scott Alsobrooks and MSU President Mark E. Keenum signed a memorandum of understanding at the Communiversity on EMCC's Mayhew campus. The Communiversity, which began classes in fall 2019, is a collaboration among EMCC, MSU and the Mississippi Development Authority focusing on training for advanced manufacturing skills required by local industries.

MSU is scheduled to sign seven more MOUs in the next few months, Cruse said, and has already signed with Hinds, Jones, Itawamba and Holmes community colleges.

Hinds Community College is the largest in the state and was the first to sign on in November. It's the only signing that has been done virtually rather than on site at the community college, and the virtual signing was symbolic because many BAS students will complete the program online, Cruse said.

BAS students could come from a variety of educational backgrounds: they could already be in the workforce for several years, they could enroll immediately after community college or they could transition from the Golden Triangle Early College High School, Keenum said. GTECHS allows high school students from five local districts the opportunity to take college classes at EMCC during their high school career and possibly obtain an associate's degree and a high school diploma simultaneously.

"People always ask me what students are going to benefit from this, what a BAS student looks like, and the answer is there is no typical profile," Cruse said.

Fourteen of the 16 current students are enrolled online while the other two are at the Meridian campus, said Susan Seal, the executive director of MSU's Center for Distance Education.

The BAS program will be administered mainly from the Meridian campus because it does not offer the first two years of undergraduate studies, so all its students are transfer students and most of them come from community colleges, Keenum said.

The program has more than 30 emphasis areas ranging from general business to psychology and social work, Cruse said.

Alsobrooks said the program might increase both enrollment at EMCC and the variety of student backgrounds and career aspirations at the institution. He also said it might change the way people look at technical degrees and career options.

"These technical degrees were once upon a time really terminal," he said. "People who wanted to work with (both) their hands and their mind together and get into these technical trades were kind of topped out and couldn't go on and get a bachelor's degree."

Communiversity executive director Courtney Taylor said the partnership with MSU will address the challenge of helping students "see the full pathway" of their career options, in general or within a specific company.

"If you want to start off on the production floor and advance upward, you can do all that in a seamless way instead of having to stop and restart all the time," Taylor said. "You can still stop and restart, but you won't lose anything if you do."