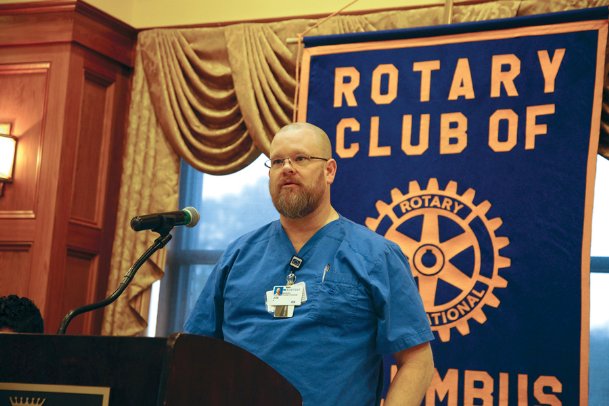 If you suffered an arterial cut, the bleeding would claim your life within three minutes.

"From the time of the puncture to the time that you go across Jordan, let's hope (it's three minutes)," Nettles said. "That's not very much time."

Nettles is a certified trainer of the "Stop the Bleed" program, an initiative of the American College of Surgeons to train the public on effective measures to control bleeding in cases of emergency.

The program, he said, is "the fruits of the Hartford Consensus," a committee of medical experts and officials hoping to raise public awareness on the issue. The committee came about after a mass shooting at Sandy Hook Elementary School in Connecticut in 2012.

"Twenty children died that day," Nettles said. "But the autopsy showed that almost every one of them had injuries that caused their deaths, (which) were caused by traumatic bleeding."

Mass shootings, Nettles said, used to be "so very rare" but has now "become so commonplace that it hardly makes any impression on us anymore."

As disasters like the Sandy Hook shooting continue, Nettles said, people need to be prepared to rise to the occasion.

"Unfortunately, someone just didn't know how to stop that bleeding," he said.

"Stop the Bleed" program, Nettles said, provides on-site training to groups of 10 or more free of charge. Each session lasts about 60 to 80 minutes, he said, and the crew has a flexible schedule that can suit the needs of the trainees. The session will feature a "vivid" slideshow, he said, and hands-on training with supplies provided to the trainees.

The rule of thumb when it comes to bleeding control, Nettles said, is to keep pressure in between the injury and the heart until someone comes to relieve you.

Roger Burlingame, member of the Rotary Club, agreed. Having received training from the program at First Presbyterian Church before, Burlingame said the key to a successful rescue is pressure, and the session was simple and helpful.

"(It comes down to) pressure applied in the appropriate place to stop or slow down the bleeding," he said, "because that's where the death comes from."

Burlingame said he hopes more people become aware of the measures so that they can be prepared to save lives in traumatic events.

"If you had a lot of people who knew this information and you had one of those horrific events happen," he said, "people are going to divide up and go around and just do the simplest kind of things that probably would have saved a lot of those kids' lives. That's very powerful."