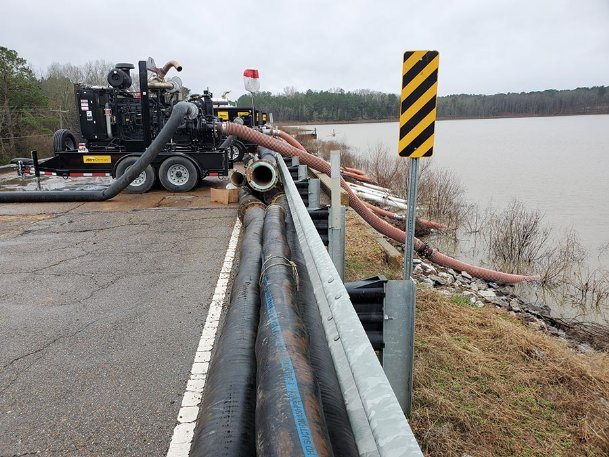 Diesel-fueled pumps siphon water from the Oktibbeha County Lake dam at 30,000 gallons per minute in this Dispatch file photo from January. County officials announced Tuesday the lake has risen 8.5 feet and is still rising. Photo by: Tess Vrbin/Dispatch Staff 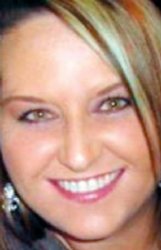 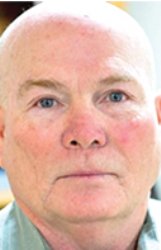 OKTIBBEHA COUNTY -- Oktibbeha County officials will likely issue another warning regarding the Oktibbeha County Lake on Thursday or Friday, thanks to large amounts of rainfall in the area on Monday, county Emergency Management Agency director Kristen Campanella said in a press release this morning.

EMA is encouraging area residents to make preparations to evacuate.

Campanella said Tuesday that the water level in the Oktibbeha County Lake had surpassed the level on Jan. 14 when the dam showed early signs of breaching and the county issued its first warning. The water level has gone down about a foot since then, Campanella said this morning, but the area is expected to receive two to three inches of rainfall today, and half an inch of rain adds four feet to the water level thanks to the 18-mile watershed.

County engineer Clyde Pritchard found no new signs of distress on the mudslide on the east side of the levee but "is very concerned," Campanella said. The lake had risen 8.5 feet from its low elevation by Tuesday afternoon, she said.

Crews installed four pipes on Jan. 14 and six diesel-fueled pumps on Jan. 17 to carry the lake water at a combined rate of 55,000 gallons per hour over the levee into the emergency spillway. The pipes lowered the water level by five feet to reduce pressure on the levee and eliminate the imminent danger of a breach, which would have forced about 250 people to evacuate at least 130 households and flooded 17,500 acres of nearby land, from the area immediately around the lake northwest of Starkville all the way to parts of southwest Clay County.

The county recommended but did not mandate an evacuation in January and lifted the breach warning Jan. 20 after the water level had gone down four feet.

The First Baptist Church Outreach Center on South Jackson Street in Starkville opened as an American Red Cross-designated overnight shelter at 2 p.m. Tuesday for any residents of the area near the lake who want to evacuate. Pets are not allowed at the shelter, but the Oktibbeha County Humane Society on Industrial Park Road will house pets if evacuees make arrangements in advance to drop them off, Campanella said.

Additionally, the mudslide that formed behind the Oktibbeha County Jail in April 2019 thanks to heavy rainfall and flooding slid another four feet Monday night, and the county placed sandbags in the area along the parking lot from Dr. Douglas L. Connor Drive to the Oktibbeha County Circuit Courthouse Tuesday afternoon.