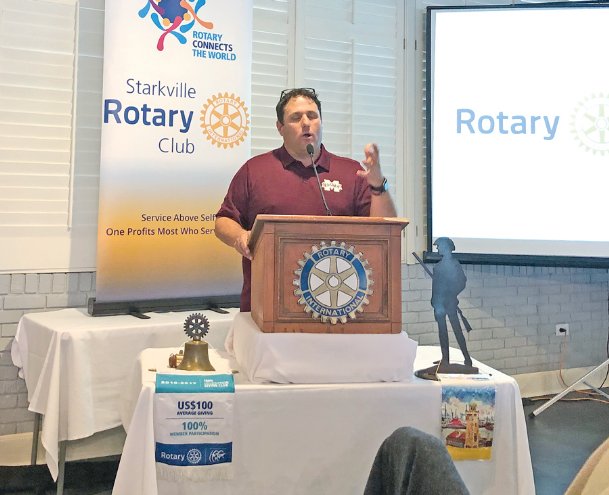 With the Bulldogs' season opener against Wright State slated for Friday, the platform afforded Lemonis -- who was performing his final public speech ahead of the first game of the year -- one last chance to celebrate the 2019 Diamond Dawgs.

"When you go to Omaha, the offseason is fun the next year because you've had a great year," Lemonis said through a smirk. "(But) we're starting 0-0 on Friday night."

Zipping over to Starkville Country Club between meetings with staffers and players, Lemonis spent not quite 30 minutes regaling onlookers with tales of last season's triumphant run to the College World Series while offering nuggets about the 2020 roster.

Reminiscing on last season's Super Regional win over Stanford, he walked through the magical ninth inning spurt in which senior centerfielder Jake Mangum recorded his final hit at Dudy Noble Field before classmate Elijah MacNamee sent the crowd into a frenzy with a home run over the right field wall.

"Until we win a national championship I think that ninth inning against Stanford will be one of the more special moments in my lifetime," Lemonis said. "And I say this as I speak everywhere, I don't know how you can have a going away party for a group of seniors or junior draft picks than what we had that night against Stanford."

Lemonis also spoke on senior closer Cole Gordon -- a graduate student who he had convinced to return to the squad last year instead of heading into the workforce. In response, Gordon notched 11 saves while earning a 3.80 ERA in 42 2/3 innings pitched.

"What a special group we had," he said. "Not just talented, but it was character. It was personality -- maybe sometimes too much personality."

With last season's memories now fleeting and a new year on the horizon, Lemonis also took time to speak on what the 2020 Bulldogs will look like come opening day.

After losing 11 players to the MLB First Year Player Draft in June, MSU must replace the bulk of their pitching staff and the leadership of Mangum, Gordon and former No. 1 starter Ethan Small, among others.

Of those, Foscue was named to the preseason All-SEC first team, while the other four were honored as second teamers last week.

"Obviously we have the best middle infield in the country, I think, in Jordan Westburg and Justin Foscue," Lemonis said. "And not just offensively -- people look at their offensive numbers -- they're really good defenders and really know how to play the game."

Lemonis also expressed that the pitching staff will be anchored by reigning National Freshman of the Year J.T. Ginn, sophomore Eric Cerantola and freshman Christian MacLeod.

Pitching behind Small a year ago, Ginn concluded his inaugural season in Starkville with an 8-4 record and 3.13 ERA.

Cerantola and MacLeod are less proven commodities. Cerantola spent much of 2019 as a mid-week starter and struggled with his location. That said, Lemonis noted he's topped out as high as 98 miles per hour this fall and is expected to take a step forward as a starter.

MacLeod is even more of a mystery after a lingering illness forced him to redshirt last season. A 6-foot-4 lefthander, MacLeod will be the lone southpaw in MSU's starting rotation to begin the season.

"We're really going to be challenged," Lemonis said of his squad that welcomes 26 newcomers to the roster. "Hopefully with this group we're a lot better team at the end of the year than we are at the beginning."