Renovations to Turner Hall bring Demonstration School 'back to life' 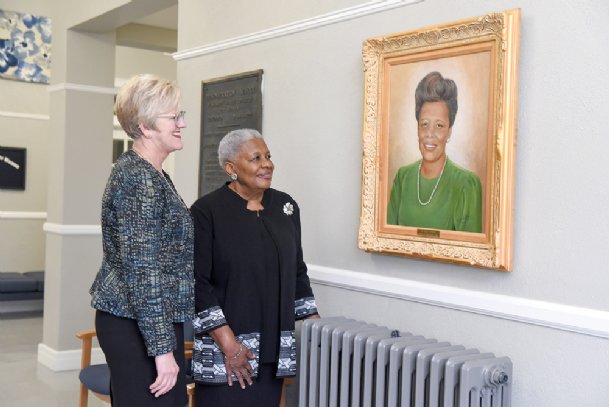 Courtney Veasey, a speech-language pathology student at Mississippi University for Women, demonstrates special equipment used to aid those with communication disabilities, while her fellow student Anna Fennell, right, looks on during a tour of Turner Hall on Friday. The equipment works by tracking eye movement so that users can type messages by looking at a keyboard.
Photo by: Deanna Robinson/Dispatch Staff

Turner Hall gets its name from Alma Turner, who was the principal of the Demonstration School from 1985-1995. Turner said she was "filled with joy and extremely honored" by the building's new name.
Photo by: Deanna Robinson/Dispatch Staff

Betty, Allen and Nora Bryan tour the large therapy room at the newly renovated Turner Hall on Mississippi University for Women's campus Friday morning. Allen Bryan is a former student of the Demonstration School, which was housed in the building from 1929-2005. MUW held a rededication ceremony in honor of the $8.2 million renovation of Turner Hall, which now houses MUW's speech-language pathology program.
Photo by: Deanna Robinson/Dispatch Staff

Pictured is the front lobby and sign in desk of the new speech-language pathology department and Speech and Hearing Center in Turner Hall on Mississippi University for Women's campus. Attendees at a Friday ceremony honoring Turner Hall, including former students and teachers of the Demonstration School which used to be housed in the building, were encouraged to sign their names in the guest book.
Photo by: Deanna Robinson/Dispatch Staff

From 1985-1995, Alma Turner spent part of nearly every week day in her office at the Demonstration School on Mississippi University for Women's campus.

On Friday, she was back, standing outside the office looking at the wall where her portrait now hangs, welcoming visitors to the newly renovated Turner Hall.

"After the name was placed on the building, I came by one day and nearly had a heart attack," Turner joked during a re-dedication ceremony for the building, which was attended by more than 200 local and state officials, MUW faculty and students and former students and teachers of the Demonstration School. "I looked up and said, 'Oh my, that's my name.'"

Turner served 10 years as principal of the Demonstration School, Mississippi's first "laboratory school" for training teachers. The school opened in 1907 and moved into what is now Turner Hall in 1929, where generations of Columbus' elementary students and MUW's teachers-in-training spent their days. The Demonstration School closed in 2005, and the building remained empty for nearly 15 years before re-opening after an $8.2 million renovation, paid for by state general obligation bonds.

Now the building will house the university's department of speech-language pathology, including the Speech and Hearing Center, which serves area residents who have trouble communicating.

It's a program that's particularly close to Turner's heart, she said. Her daughter LaChun, who was born with severe developmental disabilities, attended the Speech and Hearing Center as a child to work on her communication skills.

When LaChun began, Turner said, she didn't use words at all and only pointed to what she wanted. When the therapists in the speech-language pathology program began working with her, they started her out trying to say the word "cow."

"On one of our many, many trips to Le Bonheur Children's Hospital in Memphis for a routine checkup, we passed a pasture with a lot of beautiful cows," Turner said. "LaChun looked out of the window and said very, very plainly: 'Cow. Cow.' We nearly had an accident and had to find a place to stop so we could just enjoy the moment. We couldn't wait to tell the therapists back at The W."

"With this being a historic building, we had to maintain the windows, the corridors, the ceiling height," Miller said. "At the same time, we had to provide the acoustic environment for the speech and hearing clinic, so it was a challenge."

Despite those challenges, the building itself was in good shape, said Miller, adding: "It just had really good bones."

Now that the department has its own space, department heads hope to be able to expand the speech-language pathology program, creating more jobs for what Miller called "one of the fastest-growing occupations," growing at about 20 percent a year.

The students and faculty moved into Turner Hall in October.

"I love it. It's nice to have an updated large space to be able to serve our clients and people from the community in the best way possible," said Anna Fennell, a first-year graduate student, who gave tours of Turner Hall Friday.

Fennell plans to work with children after she graduates, though she still doesn't know whether she'd like to do so in a hospital clinic setting or a school. One of the good things about MUW's program, she said, is that the students do a medical rotation, meaning they spend a semester working in area school districts and medical centers, so she can see how she likes each setting.

The new building includes modern classrooms, office space and a computer lab. It also holds several sound-proof rooms for therapy, which are separated from observation rooms by a one-way window, allowing students or clients' family members to observe therapy sessions.

The changes weren't enough to throw off the former Demonstration School students and teachers who toured the renovations Friday morning, who would point out their old fifth grade classroom here, or the auditorium where they put on a production of Eudora Welty's "The Shoebird" there.

Allen Bryan, who attended the Demonstration School from 1986-1991, said he can still remember that particular production.

"Ms. Eudora Welty herself was in the front row," said Bryan, who had a "bit part" in the show. "And we had all these little costumes with feathers on them. It was so cute."

He said he also has memories of playing with "oobleck" -- a weird substance made of corn starch and green food coloring -- in science class, and seeing MUW students visiting the school, though he added at the time he didn't understand they were there learning how to teach.

"I'm still looking around at the renovations," he said before embarking on his own tour of the building. "...It's much more modernized now. But also having seen it when it was sitting empty, it's far better than that now. I'm interested to see which rooms are the same rooms and which rooms have been reconfigured, but that front hall -- the entrance coming in and then seeing the doors on either side -- that's exactly where the front offices were, Dr. Turner's office there. That brought back memories."

Turner said she is happy to know her old stomping grounds will be a place to prepare students who, in the future, will help out people like her daughter.

"This is a wonderful way to bring a building back to life," she said.