'I've had a good time': Rosenhan reflects on long career in fire service 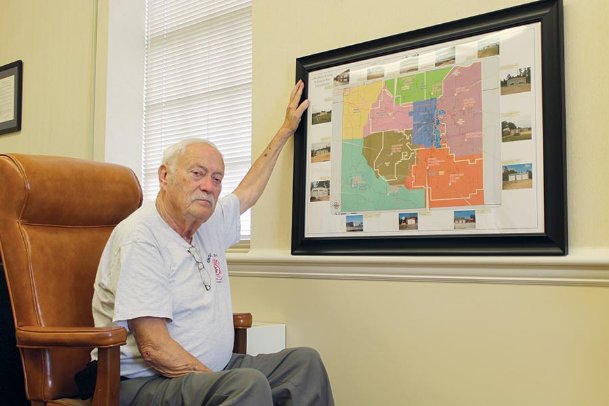 Kirk Rosenhan, who is retiring as Oktibbeha County fire services coordinator after almost 32 years, displays a map of the rural fire stations. Only two rural stations existed in Oktibbeha County in 1988 when he was appointed to his position. The creation of seven rural fire departments with a total of 14 stations is his legacy, he said. Photo by: Tess Vrbin/Dispatch Staff

"They're not going to find a replacement," he said. "They probably don't want somebody like me, (so) they're going to get a successor."

Rosenhan announced his intent to retire in December after more than 31 years as Oktibbeha County's fire services coordinator, a position he has held since it was created in 1988. However, he's agreed to serve until county leaders hire his successor, something that could happen as soon as next month. As a contractor for the department, Rosenhan is paid $600 per month and is the only paid member of the all volunteer department.

He is one of only three or four of the original 82 fire coordinators in the state still serving, since many have retired or were replaced by their county's board of supervisors, state fire coordinator Brad Smith said.

"He's probably seen more of the fire service in the world as a whole than anybody I've ever known in my life, and he retains all of it," Smith said.

The fire services coordinator is responsible for "planning, directing and coordinating all operational duties involving direct supervision of fire departments responding outside municipal boundaries," according to the official job description provided by Rosenhan to The Dispatch. Under his leadership, the county created seven fire departments outside the city and Mississippi State University. Before the rural fire departments took hold, Starkville Fire Department charged a $50 fee, "which we never collected," for its fire, rescue and emergency medical services in the rest of the county, Rosenhan said.

The seven departments and 14 stations are Rosenhan's legacy, he said, and those who have worked with him can attest to his dedication.

"It is in his DNA to be involved in the fire service," said Greg Wall, who has been chief of the Sturgis Volunteer Fire Department for 25 years.

A self-described "wacko" with a wide variety of interests, Rosenhan is the first to admit he will talk a person's ear off, and his associates agree.

"He's a super, super good guy, but if you ever want him to listen to you on something, you better have some duct tape," Smith said.

'A wealth of knowledge'

Rosenhan first became involved in Oktibbeha County fire service when he moved to Starkville in 1963 to get a master's degree in mechanical engineering at MSU. He received his bachelor's from the University of Missouri -- or "Missour-ah" as some natives like him call it -- a half-hour drive from his hometown and the state's capital, Jefferson City.

He regularly took the bus home or got a ride from his family, except for the time he heard there was a huge fire in the city.

"I hitchhiked to Jeff City and fought that fire all night with (local firefighters)," Rosenhan said. "I froze my horns off. That would have been 1961, but I had fun."

Decades later, he still responds to emergencies at all hours, Wall said.

"He cares about the firemen, and he cares about the people who are involved in a fire or an accident or a medical situation," he said. "Numerous times I've responded to calls and he'd be there in the middle of the night because he cared."

Rosenhan left Starkville for a few years after graduate school to do some teaching and engineering work but returned in 1974 as an industrial engineering instructor at MSU.

His long fire service career has earned him nationwide and worldwide connections. Smith said he has been to "very few places where someone didn't know Kirk," and he leaves an impression on those who do know him.

"When it comes time to do annual paperwork, don't hold your breath waiting on Kirk's to be the first one in," Smith said. "It will be there before it has to be there. You might have to send him a copy for the one he spilled coffee on or forgot."

"I wouldn't be where I am today without him because he's taught me and the county countless stuff we would've had to pay for (otherwise)," said Ball, who has been chief for 28 years.

Ball is also president of the Oktibbeha County Fire Chiefs' Association, which Rosenhan started years ago.

As a fellow in the Institution of Fire Engineers, which is headquartered in London, Rosenhan has traveled to the United Kingdom many times to present to his British cohorts. He has driven the fire boat at Plymouth Harbor, something he said he is sure no one else in Starkville has done. He said he has also been the unofficial tour guide for British firefighters visiting the U.S. and taken them to St. Louis; Tuscaloosa, Alabama; Milwaukee, Wisconsin; New York City and Chicago.

He felt the sting of his cross-country connections on Sept. 11, 2001, when 343 firefighters died in the 9/11 terrorist attacks. Some of them were his friends, and he attended some of their memorials in New York City in the following weeks, he said.

"(It was) almost like being a soldier in the military, knowing that he had lost brothers," Hodge said.

Rosenhan has written several articles about fire protection, and contributed to several books, including one about the effects of burns on the human body. One of his books can be seen in the background of the TV show "Chicago Fire," which he said is an accurate depiction of fire service.

He also has an interest in aviation, something he shares with Hodge, who is now retired from the MSU mechanical engineering faculty. Hodge said Rosenhan regularly emails him photos of aircraft he sees in museums that he thinks would interest him.

"I get this package in the mail from him one day, and it's a copy of the fire protection journal, and he had published that program in there along with my name and his name," Hodge said. "That was something I would have never envisioned."

Rosenhan also sought other forms of public service in his career. He served one term in the 1970s as Ward 4 alderman in Starkville and later ran for mayor twice.

"Fortunately for both me and the city, I came in second (both times)," he said.

Ball and Wall both said the county fire chiefs are planning a farewell reception for their longtime superior, although Rosenhan said he will still be active in the fire service community. He has plans to travel to the National Fire Academy in Emmitsburg, Maryland to do some work for the Federal Emergency Management Agency.

"You don't make any money at it, but the cafeteria at the Fire Academy has an excellent ice cream machine," he said.

Rosenhan will be 80 years old in May, and overall he is satisfied with his life and career, he said.

"If I fall dead here going out the door, I've had a good time," he said.