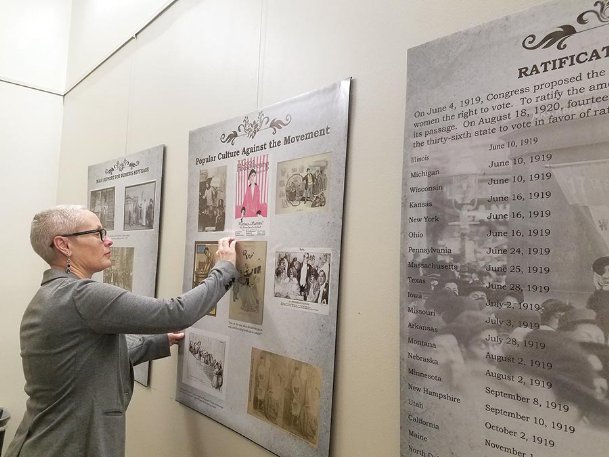 Jenifer Ishee, a digital archivist at MSU Libraries, adjusts a panel Thursday in the exhibit she curated about the women's suffrage movement both nationally and in Mississippi. The 11-panel exhibit in the Old Main Academic Building has been up since October and will be up for two more weeks. The centennial of the Nineteenth Amendment is next year, but Mississippi became the last state to ratify the amendment in 1984. Photo by: Tess Vrbin/Dispatch Staff

Maddie Arbogast's visit to the women's suffrage exhibit on display at Mississippi State University was partly by accident, she said.

Arbogast, a senior from Florida, had some time on her hands after a study session got canceled in November before Thanksgiving break. She was walking through the Old Main Academic Building and noticed the 11-panel display in the Louis Burns Brock, Jay Brock and Hank Brock Gallery on the building's first floor.

She said she was surprised to learn how active Mississippi women were in the national fight for women's right to vote.

"Growing up, I always kind of saw Mississippi as a little bit behind the eight-ball on stuff," Arbogast said. "The portions of (the exhibit) that talked about the movement here and who was involved was really cool and really interesting."

"Votes for Women! A Centennial Celebration of the Women's Suffrage Movement in America" highlights the movement for women's voting rights, with the 100th anniversary of the ratification of the Nineteenth Amendment coming up in August 2020. The exhibit has been up since October and will stay up for two more weeks, but it will be on display again in Mitchell Memorial Library in August, exhibit curator Jenifer Ishee said.

Mississippi was the last state to ratify the Nineteenth Amendment to the U.S. Constitution. It was adopted nationwide when Tennessee became the 36th state to ratify it in 1920, but several more Southern states lagged behind, including Alabama, Georgia and Louisiana. The Mississippi Legislature rejected the amendment in 1920 with a 94-23 vote but ratified it unanimously in 1984.

"People might think that women in Mississippi were not fighting for suffrage considering how long it took to ratify it, but that's not true," said Ishee, a digital archivist at MSU Libraries and a PhD student focusing on women's history. "There were a lot of women who were really involved and they were pretty devastated when it didn't pass."

Fighting for suffrage in Mississippi

Ishee said she became interested in curating the exhibit after researching Alma Dorsey Birdsall, a Yazoo County native and active member of the women's suffrage movement. The online academic publisher Alexander Street Press collected a database of suffragists and was looking for someone to gather information about a Mississippi suffragist about a year ago, Ishee said, and the exhibits committee at MSU Libraries asked her to gather more information and create an exhibit.

Birdsall served as secretary and vice president for the Mississippi Women's Suffrage Association. The organization formed in 1899 but did not gain traction until 1906, and it turned to local newspapers the following year to help its cause. Twenty-one papers agreed to participate, including the Yazoo Sentinel, which Birdsall's husband owned and edited. According to Ishee's research, Birdsall wrote an article for the Sentinel titled "Why Women Ought to Vote" in 1913.

In addition to lobbying the Legislature and holding speaking events, the MWSA advertised its events and published pro-suffrage columns in newspapers across the state for a decade, and the exhibit includes a panel of clips from several papers. Two clips from The Dispatch headlined "Suffrage Notes" in March 1917, edited by the Columbus Equal Suffrage League, rounded up both local and national advances in the suffrage movement. According to one clip, the state held its annual suffrage convention in Starkville the following month.

Women could already vote in some states, including Colorado and New York, in local and state elections before the Nineteenth Amendment passed. The MWSA commended Washington state for granting women the vote in 1911, according to an article in the Jones County News on May 4, 1911 after the MWSA convention in Cleveland, Mississippi.

The organization lamented the United States' resistance to giving women the vote, "placing us in the ridiculous position of not applying the principles for which our forefathers fought, bled and died," the organization wrote in the Jones County News.

Birdsall became the next owner and editor of the Sentinel, an unusual job for a woman to have in her time, in 1930 after her husband's death. She died in 1932.

The Brock Gallery usually features an exhibit that MSU Libraries decides is worthy of an entire space for observation, Ishee said. The exhibit's sign-in sheet does not have many names on it, and Arbogast was one of the first.

She is studying secondary education with an emphasis in social studies, and she said she hopes to get a master's degree in "something in the realm of feminism," so the exhibit is relevant to her interests.

"I had always walked past (the gallery) before, but there was never really an exhibit I thought was interesting," Arbogast said. "I wandered in there and realized I'd been kind of missing out on these really cool things, and it makes me wonder how many other students do what I always did before, just kind of look at it and think, 'Oh, that's cool, better go to class,' and never take the time to look at it."

The exhibit caught the attention of Sarah Matthews, an eighth-grader at Starkville Christian School, and her family on Wednesday evening. Her brother had a music recital on campus, and the family decided to check out the exhibit. Sarah's mother, Allison Matthews, is the news editor for the MSU Office of Public Affairs.

Sarah, 13, said she now wants to learn more about the work of individual suffragists, especially the ones in Mississippi. She had heard of the nationally known ones such as Susan B. Anthony and Lucretia Mott but had not yet learned about state-level suffrage activism, she said.

Ishee said schools could do a better job teaching women's history so people understand that women were socially active during the late 19th and early 20th centuries, despite having limited rights and expectations of them.

"The women that started the suffrage movement were abolitionists first," Ishee said. "They had been involved in social issues for decades before they started fighting for suffrage."

Sarah said she finds it "kind of hard to imagine" that women have had the right to vote nationwide for less than a century.

"I think it's very important that we have that right to vote because it's part of our duty and every vote counts," she said.

1. Yokohama shutting down for 2 weeks because of coronavirus AREA

2. While Trump says economy could restart fully by Easter week, local pastors, businesspeople are not as optimistic AREA

3. Some international students have no way home AREA