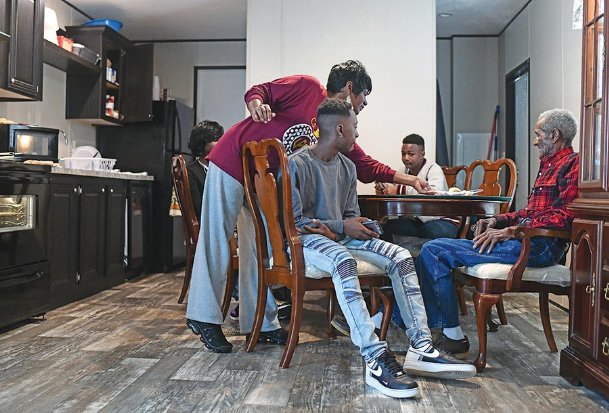 Louise Patmon sets a plate of food on the table for her father, LA Griffin, as the family sits down for dinner Friday at their new home in Columbus. Patmon moved into the new home with her husband, father, daughter and grandsons Tuesday after weeks of homelessness. "It's been a little crazy around here," she said. Photo by: Jennifer Mosbrucker/Dispatch Staff

Louise Patmon vacuums a conference room Nov. 20 at the Columbus Municipal Complex, where she works. Patmon and her family were recently evicted from their house on Nov. 4 and spent several weeks staying with relatives while searching for a new home. Patmon's story is similar to that of dozens of other homeless individuals in the Golden Triangle.
Photo by: Jennifer Mosbrucker/Dispatch Staff 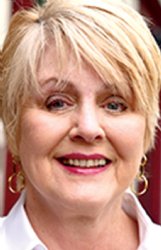 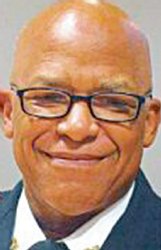 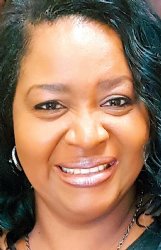 On Nov. 4, Louise Patmon was evicted from the home she'd lived in for three years.

The Caledonia native who works as a housekeeper for Columbus Police Department had been living in the east Columbus house with several other family members -- including her 81-year-old father who has cancer -- and was a month behind on rent. She had already been taken to court and told a judge she would have the rent money by early November. However, the $840 she tried to pay on Nov. 4 only covered October's rent, not November's.

Now she, her father, her husband, her daughter and two grandsons were all homeless.

"It's affected all of us," she said. "It's affected my grandkids, because they got off the (school) bus and they didn't have a home to go to."

The family split up. Patmon, her husband and her father bounced from relative's home to relative's home, while her daughter and grandsons stayed with friends. Luckily, Patmon said, they had support from members at her church and help from the city's Community Outreach center.

Now, Patmon, her husband and father are moving into an apartment off Lehmberg Road.

Patmon's homeless, though shorter lived than some, is not an unusual story to people like Community Outreach Director Glenda Richardson or Martha Kirkley, who, along with Sandra DePriest, is co-president of Golden Triangle Regional Homeless Coalition. Though neither had exact numbers, the two women work with people who were evicted like Patmon, who were kicked out of their homes by family members or even people living in buildings without electricity or heating.

"There are lots of, we call them couch surfers," Kirkley said. "They go between relatives' homes, friends' homes, their car. That's why it's so difficult to get a handle on exactly the number of the homeless population in our community. All communities are the same, they've got this issue. It's hard to nail down just how many are in need."

A 2018 assessment published by the Department of Housing and Urban Development found that on a single night in January 2018, more than 550,000 people were homeless around the United States, with about 65 percent of those having some sort of shelter.

The numbers are harder to pin down in the Golden Triangle, Richardson and Kirkley said, partly because the problem looks so different depending on the homeless individual's circumstances.

Possibly the closest the Golden Triangle comes to seeing homelessness that people traditionally think of -- people bundled up with few belongings asleep on the streets -- is what Columbus Police Chief Fred Shelton said his officers see on patrol.

"We get calls about people sleeping in cars, sleeping behind buildings, sleeping inside of buildings," he said. "I.e., the ones that we most commonly have are ... hanging out in Walmart, sitting on a bench sleeping or just staying warm.

"We even had one guy ... sleeping in his truck because he just couldn't afford to (rent a home)," he added. "He was making money. He was working, but he's not making enough to do a deposit, to pay rent."

But there are also people who have no home of their own and are crowding in on relatives.

"We have a lot of multi-families living together where there's not enough space," Richardson said. "For example, you may have a single mom and her kids moving back in with a mother that only has a one-bedroom. So it's like an overcrowded space."

She also sees mentally ill patients whose families can no longer care for them living on their own.

"I had a client (whose son) would stay up all night long, just walking around, coming in and out of the house, punching holes in the wall," Richardson said. "She eventually had to put him out because she said he wouldn't stay on his medication and she just couldn't deal with it."

There are also people living in homes "not meant for human habitation," she said.

"They don't have (running) water, they don't have lights, the children don't have beds," she said. "So it's just not adequate for that family to live in, especially when it's real real cold or real real hot."

Those extreme temperatures prompted city officials, Shelton, Kirkley, Richardson and heads of other area nonprofits to set up an emergency shelter at the city owned Farmers Market Annex -- formerly the old Boy Scout hut at the intersection of Third Street and Third Avenue North.

The shelter will be open from 5 p.m.-8 a.m. on nights when the weather is supposed to be below freezing -- which some forecasters said could include tonight. Those who are homeless or otherwise have inadequate shelter and who can make it to downtown Columbus can spend the night and eat a meal.

Kirkley guessed the first time the shelter opens, it will attract 15-20 people.

"It's going to take a while to get to the population, what's available," she said. "They're going to be fearful, I believe at first, of having to divulge a lot of information depending on the situation. If there's substance abuse issues, if they have criminal records, that kind of thing, that's going to make them a little hesitant and possibly fearful."

Shelton, whose officers will help provide security at the shelter on nights when it's open, said that won't be the case. Instead the shelter will have an "amnesty box" for people to surrender drugs, alcohol or weapons.

"If you have something that you're not supposed to have, you can drop it in the box and (nothing will) be said," he said. "You won't be charged. We're not going to try to prosecute you. We're just trying to meet your emergency need."

A place to call their own

What the emergency shelter can't provide people is long-term care -- particularly for those suffering from mental illness or addiction, Kirkley said.

In addition to the food and warmth, the shelter will come with information and resources from Community Counseling Services and other nonprofits designed to meet specific needs. For some people, that may just mean working with Richardson's office to get their power bill paid so they can get lights and heating back on.

For others, it may mean finding long-term treatment for mental illness, which Richardson says often goes "hand in hand" with homelessness.

"If they need the services, (Community Counseling is) more equipped to handle it than Martha and I," she said. "We can put them in a temporary shelter, but long term they need to be on their medication or some other kind of therapy that we can't provide."

"I want to emphasize it's not against the law to be homeless," Shelton said. "It's not against the law to have a mental illness. However, what we do want is to put them in an environment where at least they'll be exposed to some help if they want some help. There'll be some resources available to them ... If they say, 'Look, the reason I'm homeless is I'm an alcoholic,' here's some resources that you can get."

Ultimately, Richardson said, the goal is to get people back in a stable home environment.

For Patmon, who moved into her new apartment just in time for Thanksgiving, that environment means a lot.

"Something to call my own, our own," she said.