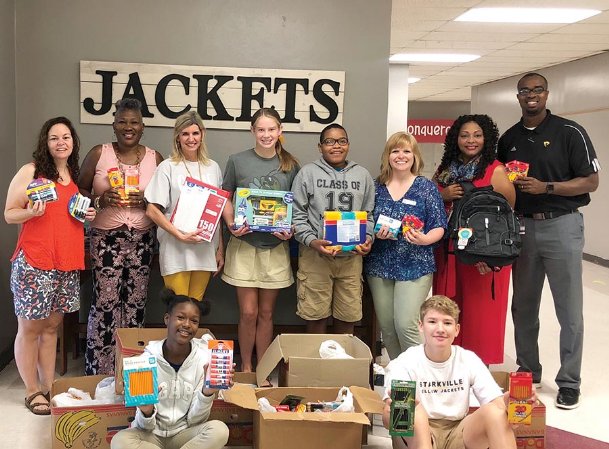 A group of volunteers from the Salvation Army donated clothes, personal hygiene products and school supplies to the Starkville-Oktibbeha Consolidated School District's Clothes Closets at the beginning of the school year. The program started at individual schools and consolidated with the help of community service groups and churches, organizer Marchelle Brain said. Photo by: Courtesy photo

STARKVILLE -- The clothes closets in the Starkville-Oktibbeha Consolidated School District started as a quick and easy solution for students to get clean clothes in case of emergency and return to class quickly.

The effort at a few individual schools consolidated into a district-wide program that grows every year, said Marchelle Brain, a member of the SOCSD Parent Teacher Organization since 2013. Brain has been an active coordinator of the clothes closets and said the program has been "an organic thing that arose" after people regularly donated their outgrown uniforms.

The clothes closets are a resource for school social workers as well as students, she said.

"If there's a fire or something, it's the first place they go because they can get full uniforms just like that," Brain said.

The SOCSD elementary and middle schools started a clothing and hygiene item drive Monday that will last until Dec. 6. The schools are looking for new or gently used clothes that fit the district dress code, new socks and underwear, diapers and baby clothing for the Emerson Family Center's diaper bank and personal hygiene items like soap and deodorant.

SOCSD does not track how many clothes and other items are available or how many students benefit, Brain said.

Both school districts in Lowndes County also have resources for students who need new uniforms but do not have coordinated district-wide efforts. Teachers in the Lowndes County School District who identify students in need of necessities like clean clothes send them to the school nurses, who direct them to the district's special services department or homeless liaison to get whatever they need, Superintendent Lynn Wright said.

The counselors at each individual school in the Columbus Municipal School District have clothing closets, and local churches and other faith-based organizations help keep the closets stocked, Superintendent Cherie Labat said.

Brain said SOCSD could not run its clothes closets on its own.

"I'm not surprised if another school district doesn't have it, because it would be too much for social workers and counselors," Brain said. "They're already overworked. It took parents and community organizations to get involved to help make this happen."

Some of those organizations are the Modern Woodmen of America, the Progressive Starkville Network, Mississippi State University's Maroon Volunteer Center and churches including Sand Creek and Second Baptist. The Salvation Army held a supply drive over the summer and will donate hygiene supplies to the schools in addition to clothes, Brain said.

The Starkville Junior Auxiliary voted to "adopt" the clothes closets at Sudduth and Henderson Ward Stewart elementary schools. Sarah Walker, chair of the Junior Auxiliary's projects committee, said the organization buys new clothing to make sure all sizes are available.

"We don't want there to be an instance where something as simple as clean clothes or a clean pair of pants impedes a child's education," Walker said.

Walker said the JA also volunteers to fold and organize the clothes so school faculty and staff do not have to. Brain said those hours are vital to the program's success because students can leave the closets messy.

"Once it gets torn apart, it's total chaos, (so) we need volunteers to come in and help out," Brain said. "It's a simple thing, but it makes a huge difference."

The JA used to provide uniforms for students in need based on referrals, and it has received fewer referrals in the last couple years because of the clothes closets' impact, Walker said.

"We always have kids in great need in mind when we do this, but it's not an issue of socioeconomic status if you spill spaghetti on the front of your shirt or if you fall in a mud puddle," she said. "It's just to promote success for every single child that we can."