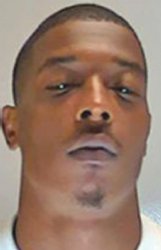 A Columbus man will spend 20 years in prison after he pleaded guilty to shooting another man to death outside the Motel 6 two years ago.

Johnathan Majors II, 29, pleaded to second-degree murder this week, almost two years after he was arrested for killing 27-year-old Michael Garth, according to Assistant District Attorney Lindsay Clemons. Majors was sentenced to 40 years in the Mississippi Department of Corrections, with 20 years suspended. He will serve the sentence day for day, meaning he will not be eligible for early release or parole.

Witnesses told Columbus police Majors shot Garth on Dec. 22, 2017, at the Motel 6 on Highway 45 shortly after midnight. The two had both attended a Christmas party for Zaxby's employees, Clemons said, and witnesses told authorities Majors had become "super aggressive" and had been "picking at Michael all night." Eventually the two got into an argument in the parking lot where they began to fight. Majors told authorities he turned to run, shooting behind him as he did, though Clemons said other witnesses did not report that.

"I think it's always good to get a resolution for the family that the family is comfortable with," Clemons said. "Everyone that we've talked to (who was) a member of (Garth's) family felt very strongly that (Majors) not get life in prison given the circumstances, which I think is incredible in this day in age of eye for an eye vengeance. So I think that this was a just result, and I'm glad for the victim's family in that respect. But it's always heartbreaking. Michael Garth had children. They've lost him forever. Johnathan Majors has ... a child, and he won't be there for at least 20 years."

Majors' attorney, Jay Hurdle of Columbus, declined to comment on the case.