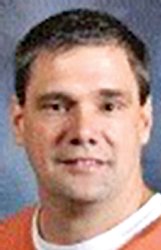 After a more than two-hour executive session Monday night, Lowndes County School District's board selected Allison as the next superintendent. He will become the district's first board-appointed superintendent and will succeed Lynn Wright, who has served eight years via public election. Wright will remain superintendent until his term expires Dec. 31.

The board chose Allison from among three finalists, all of whom were interviewed in a closed meeting last week. Other finalists were LCSD Assistant Superintendent Susan Johnson and Starkville-Oktibbeha Consolidated School District Deputy Superintendent Christy Maulding.

"It was a tough decision," board member Jane Kilgore said after the meeting. "It took a lot of soul searching, and we took this obligation very seriously. ... The board is behind Mr. Allison."

Allison has been principal at NHMS since 2006, following a two-year stint as assistant principal there. The New Hope native began his teaching career in Alabama in 1993.

"I'm ecstatic," Allison told The Dispatch in a phone interview following Monday's decision. "This is home, and this is where I'm going to be. I'm looking forward to leading the district and continuing to empower people to do the work they do every day, whether it's teachers, administrators or staff."

Board members did not release contract specifics -- including length and salary -- Monday night, saying they will meet with Allison within the next week to finalize those. Board member Brian Clark said he also wanted to use that time to explain to Alison why he was selected.

Among those reasons, Clark said, is NHMS' improvement from a C to a B in the Mississippi Department of Education's accountability ratings, a grade scale largely based on student performance on state benchmark exams. That school's improvement helped the district achieve an overall A rating this year.

It didn't hurt either, Clark added, that Allison is a known quantity with a long tenure at LCSD.

"I think it helped a lot that we already know him," Clark said. "Sam carried himself well in the interviews and he's worked hard to pull up New Hope Middle School's rating."

LCSD's board hired the Mississippi School Boards Association earlier this year to assist with the search, which yielded 15 applicants that met the minimum qualifications.

Wright applied to keep his job and made it among the six semifinalists the board interviewed initially. But he was not among the three candidates chosen for final interviews, which were conducted before the board and a board-selected committee of 15 stakeholders.

"Mr. Wright deserves a big thank you for his years of service to the district," Clark said.

Monday's lengthy executive session shed some light on the difficulty of the debate, board members admitted, and none would confirm whether the vote to hire Allison was unanimous.

"You'll have to wait to see it in the (meeting) minutes," Clark said.

Those minutes should be publicly available within 30 days.

Robert Barksdale, board president, would not comment on whether Allison was his personal choice among the finalists but said he respects the process and the decision.

"It was a board decision," Barksdale said. "Sam got it."

Allison said he was honored to be considered for the job among a competitive candidate field and felt he had presented himself well in the interviews.

"I felt good about the process," he said. "I'm a big faith guy, so I was in a position where I was good either way. If I get the job, I get to be superintendent for the district. If I hadn't, I'd still get to be principal at New Hope Middle School."