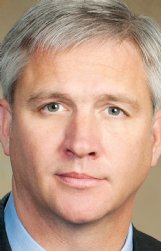 The Greater Starkville Development Partnership announced Mike Tagert as the new CEO this morning after the position was open for almost 18 months.

The Partnership role is part of his new title as associate director for Corporate and Economic Partnerships within Mississippi State University's Office of Research and Economic Development (ORED). He will assume those roles on Jan. 7, 2020.

Tagert is currently the Northern District Commissioner for the Mississippi Department of Transportation but chose not to run for re-election. He was first elected in 2011 and his current term will be complete at year's end. He also ran in a special election in 2015 to fill the District 1 U.S. House of Representatives seat created by the death of Alan Nunnelee but lost to Trent Kelly in a nonpartisan primary.

He has a bachelor's degree from Millsaps College and two master's degrees from Mississippi State University.

The most recent Partnership CEO, Scott Maynard, stepped down in June 2018 after almost a year in the position. Jennifer Prather was interim CEO until she left on Oct. 1 to become director of community development for the Mississippi Main Street Association.

The Partnership is the city's chief economic development and tourism group. It includes the Oktibbeha County Economic Development Authority, the Starkville Convention and Visitors Bureau and the Starkville Main Street Association.