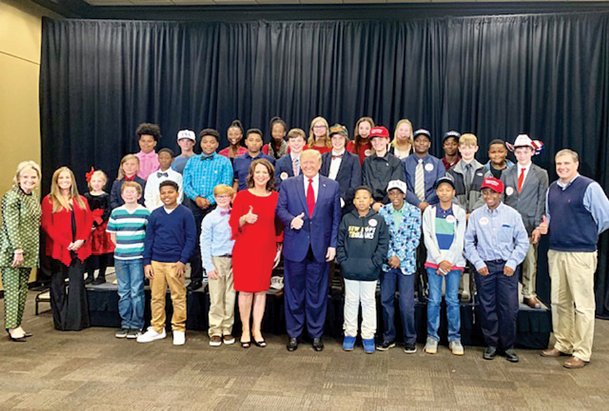 Liza Miley's language arts class at New Hope Middle School, along with some other New Hope students and staff, pose for a picture with President Donald Trump at Trump's rally at BancorSouth in Tupelo Friday. The students got to speak with Trump, as well as other politicians and journalists at the rally. Photo by: Courtesy photo 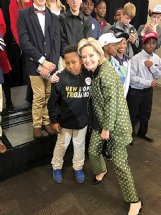 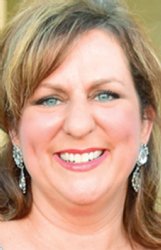 Still, Miley took a video of Beckwith on her phone with a plan to send the video to U.S. Sen. Cindy Hyde-Smith (R-Brookhaven), who is a relative of a friend of Miley's.

"Senator Cindy," Beckwith says in the video. "Can you get some tickets for me to go with some friends to go see Mr. Trump?"

Miley, asking "Who else wants to go?" then pans the camera to the other 20 plus children in her language arts class who all cheer "Me!"

"Thank you if you can," Beckwith adds.

After filming the video, Miley sent it to Hyde-Smith.

"I sent it to her never in a million years expecting that we would get (tickets)," Miley said.

So she was thrilled when two days later -- Oct. 25, a week before President Donald Trump was scheduled to speak at a rally in Tupelo -- Hyde-Smith told her the Secret Service and Trump's staff had agreed.

"She just said, 'Liza, this is Cindy. I've shown your video to the president and to Jared Kushner, and on behalf of the White House, we want to invite your class to see the president in Tupelo,'" Miley remembered. "I was like, 'What? This can't be real.'"

But it was real. Hyde-Smith told Miley only one class could meet Trump, so Miley quickly arranged for the students to take an after-school field trip to Tupelo on Friday, where Trump was holding a rally at BancorpSouth Arena.

The 28 students, along with Miley and some other NHMS staff were a handful of thousands of people from both in and outside of Mississippi who attended the rally. Outside the arena, the students bumped into Mississippi Gov.-elect Tate Reeves -- which was not part of the plan, Miley said -- and talked with him for a while. Through the course of the afternoon and evening, the students also met Hyde-Smith, U.S. Rep. Trent Kelly (R-Saltillo), Gov. Phil Bryant, White House staff and journalists from national media outlets.

"Several politicians took the time to come over and greet the students," Miley said. "They're so busy with so many other things sometimes, and it's not like these kids can vote. But they still took the time to make a difference in their life with something they'll always remember."

"They were, I think, blown away by all the Secret Service and press," Miley said of the students.

At the arena, the students were taken to a back room where they were checked by Secret Service agents for a second time. Only then did they meet the president.

Trump only had a couple of minutes to talk to the students, but Hayden Wofford said Trump asked which of them was the most athletic.

"(It was) me," Wofford added, though Miley said many students claimed the title.

Miley, the students and other chaperons all lined up to have a photo taken with the president and those who wanted campaign swag received it, including hats and shirts bearing "Make America Great," "USA" and "45." The group also attended the rally.

Miley said she's extremely grateful to Hyde-Smith, Trump and his staff for allowing her students such a unique opportunity.

"I just hope that they just realize what an opportunity this was to be able to meet basically the most powerful man of the world," she said.

The students reported a variety of reactions -- Beckwith was surprised how different Trump looked in real life from TV, Davon Gray called it a "weird experience" and Fox said his "heart dropped." But the students, even those who said they don't like Trump's politics, agreed it was a great experience.

"I was surprised to see how tall he was," said Jaiden Linebarker. "It was surprising that I've seen the president."