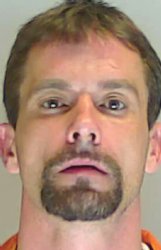 Nicholas Shane Gray Sr., 38, is accused of making threatening statements, and investigators believe he is armed and dangerous, according to an LCSO press release. There are multiple warrants out for his arrest, including possession of a weapon by a felon.

Gray is traveling in a tan/brown Chevy trailblazer, the press release said.

Gray has been on probation for two taking of a motor vehicle charges from 2006, but the probation was revoked in October due to his pending charges.