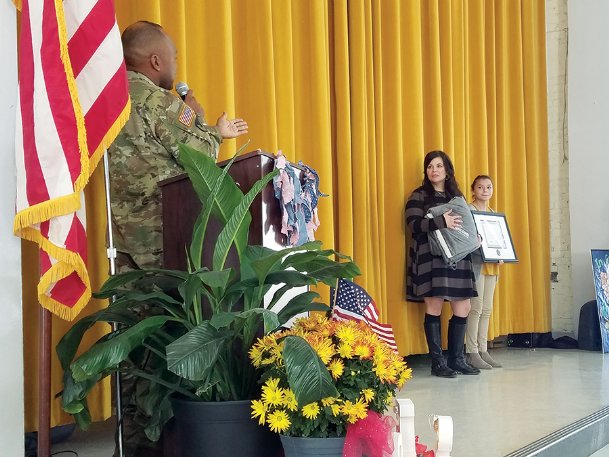 The program has gone as planned until the end, when National Guard Col. Rodney Harris walked up to the podium during Overstreet Elementary School Principal Cynthia Milons' closing remarks and said he was about to present an award.

"We were just kind of going with it, and I was squirming in my seat because I didn't know what was happening," said Mulrooney, an art teacher in Overstreet Elementary School's gifted program.

She soon found out the change was part of a surprise for her. She received the Mississippi National Guard's first Distinguished Teacher of the Year award for her support of a former student whose stepfather was away serving in the National Guard last year. Mulrooney ascended the stage in the Overstreet gymnasium with tears in her eyes while the entire school and visiting veterans applauded.

Hannah Leach, now a sixth-grader at Armstrong Middle School, needed someone to lean on at school last year, when she was a fifth-grader at Overstreet and her stepfather was deployed for 14 months. Her positive experience in Mulrooney's class led her and her mother to nominate Mulrooney for the award.

"She makes learning fun for the students and always made Hannah feel respected and appreciated," Harris read from the nomination letter before presenting the award.

Hannah's mother, Lisa Stricklin, described Mulrooney as "thoughtful and loving" but with a "special place in her heart" for military children. When Hannah's stepfather returned from his deployment, Mulrooney helped organize a surprise for Hannah at school.

Taking Hannah under her wing is part of her job as a teacher, Mulrooney said, and she did not think she necessarily went "above and beyond" because she hopes to form positive relationships with all her students.

"It amazes and humbles me to know (Hannah) felt it was as great as it was," Mulrooney said. "It kind of refreshes me and reminds me that my job is impactful and important and that I'm on the right track."

Superintendent Eddie Peasant said the Starkville-Oktibbeha Consolidated School District is proud to see Mulrooney recognized on a state level for her love of children and the district beyond just her classroom.

"She loves children and loves people, and is an out-of-the-box thinker and a creative person," Peasant said. "There are other teachers in our district who do the same things in different ways, and a lot of them probably follow her lead."

Mulrooney put together Overstreet's first Veterans Day assembly in 2016 at the request of then-principal Tim Bourne, who is now the SOCSD Director of Accountability, Accreditation, and Assessment. The student-led assembly includes a guest speaker, presentations by members of Starkville High School's Junior Reserve Officer Training Corps, recognition of students' loved ones who have served in the military, and the reading of a thank-you letter to veterans from a student.

District security chief Sammy Shumaker, an Ackerman native and an Army veteran of the Gulf War, was this year's guest speaker. He advised students to practice gratitude for their blessings based on the war-torn cities he saw during his service. He also advocated for unity in times of personal and political division.

"No one is greater than anyone else because of the shade of our skin, because in God's creation, we all are different shades of brown, since He created man from the dust of the ground," Shumaker said.