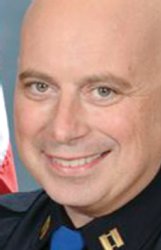 Ballard was one of eight applicants, some of whom were from outside Starkville, Mayor Lynn Spruill told The Dispatch. Ward 3 Alderman David Little proposed Ballard's appointment to the board and listed his qualifications, including his experience standing in for Chief Frank Nichols when he is absent. Ballard has been a Starkville police officer since 1996, and Nichols will retire at the end of the year.

The board approved Ballard's appointment without any discussion. His annual salary will be $85,000.

"The board had the applications available to them, and obviously they felt unanimously that Capt. Ballard was the person for the job," Spruill said after the meeting.

Ballard is currently the administrative staff commander and head of investigations. He has previously been a drug court law enforcement representative for the 16th Circuit Drug Court and Mississippi Homeland Security information liaison officer, according to his resume.

"I am so honored that the mayor, vice mayor and the board of aldermen have confidence in me to lead this department," Ballard said. "This is an important task and one that I take very seriously."

He also expressed appreciation for Nichols' leadership and said he created "a foundation of success" for the department.

"The potential for this organization is tremendous and I am excited to have a part in that," he said.

The police department sent The Dispatch five letters of recommendation that Ballard included in his application, submitted in September. Among them, Lt. Col. Brian S. Locke, director of the Center for America's Veterans at Mississippi State University, praised Ballard's "impeccable leadership qualities," and OCH HealthPlex Director of Wellness Eddie Myles called Ballard "one of the most persistent and detail-oriented people I have met."

Earlier in the board meeting, aldermen voted to declare five dilapidated properties "a menace to the public health, safety and welfare of the community." Four of the five votes were unanimous and did not become a topic of debate for the board.

Defense attorney Gary Street Goodwin came forward to contest the designation for the fifth property, a the yard of a house on Garrard Road owned by Walter Okhuysen. The property includes an overgrown yard filled with what the city determined to be junk, including scrap metal.

The city determined the property to be violating city code after multiple inspections earlier this year, according to the meeting agenda. Municipal court ordered Okhuysen to clean up the property, and he appealed the ruling. The case was initially re-heard in municipal court in September and will have a full hearing in February.

Goodwin wrote a letter to the board that he also provided to The Dispatch, saying the city was not specific enough in its instructions to clean up the property. A judge ordered the city to provide a list for Okhuysen, but the list was still too vague, Goodwin wrote.

Additionally, the photographs used as evidence of Okhuysen's property being a code violation could not have been taken without trespassing and therefore should not be used as evidence, the letter states.

"If the menace to the public can't be observed from the public right of way, then there is no menace," Goodwin wrote.

Ward 5 Alderman Hamp Beatty said the city can provide a more specific list so the issue can be resolved as soon as possible. The state of the land affects nearby property values, and neighbors want something to be done, he said.

"If my house were next to that property, I'd be right there with these residents, I promise you," Beatty said. "This is inexcusable, carrying this on and continuing to delay it. We'll provide a list, but we need to see some action and see this being cleaned up."

The board of aldermen voted 6-1 to condemn the yard on the property with the condition that the city provide Goodwin and Okhuysen a more specific list of instructions, and Community Development Director Sungman Kim agreed to put together the list.

Ward 1 Alderman Ben Carver was the dissenting vote, saying that the board should table the issue until the case is resolved in court and that he believed Okhuysen was making "good faith" efforts to clean the property.