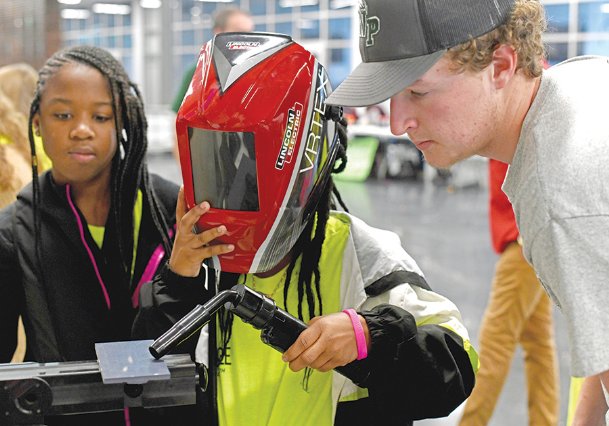 Down the hall toward the back of East Mississippi Community College's Communiversity, a group of young teens rushed toward a man holding a big bowl filled with small orange objects.

"Is that candy?" shouted one of the kids, among the more than 1,000 Golden Triangle eighth-graders who descended on the new vocational skills center as part of the first FORGE Foundation Career Expo.

It wasn't candy, but earplugs.

Even so, Wednesday's event, featuring booths and activities from 10 construction-related companies and a half-dozen technical schools and support organizations, was a treat on Halloween Eve.

"This is pretty cool," said Curtis McDonald, a student from New Hope Middle School. "I like hanging the drywall and it was cool learning about how to drive the road grader. That was a lot of fun. I could probably do something like this as a job when I get out of school. "

Students filed through the halls of the Community Center, stopping at tables where they were exposed to a wide range of jobs. Waters Truck and Trailer brought a tow truck, and Burns Dirt a road grader -- a piece of equipment used to level roads before paving them. Students took turns climbing into the cab of the massive machine.

Each organization had representatives on hand to talk about the types of jobs their companies provided, but the most popular were those that featured hands-on activities.

Students drew blueprints at a table operated by JBHM Architecture, pedaled stationary bicycles to generate power to light a bulb at the Mississippi Construction Education Foundation exhibit, competed with other students to drive nails into a 2x4, helped build a brick wall at the Columbus Brick exhibit, drove screws into sheet rock at the Graham Roofing station and tried their hands at a dozen other activities that kept them engaged.

"It's going really well," said FORGE Foundation member Katie McCrary, who owns McCrary West Construction with her husband Lu. "The kids are having fun. They're loving the masonry wall or finishing concrete because they've never seen it. Today was all about exposure."

The need for skill trade

"We came together because all of us are small businesses and we could not find employees to hire so we were stealing them from one another," McCrary said. "So we all decided to sit down and work together. Small businesses can offer this next generation a lot."

Christee Holbrook, co-owner of Graham Roofing, said that common issue wasn't the only factor in bringing the group together.

At the time, the Lowndes County School District was putting the finishing touches on its $11 million Career Tech Center while the $42 million Communiversity was well on its way to completion.

"We were raising our hand, saying don't forget us," Holbrook said. "We all love having all this big manufacturing, so our message was, 'Hey, we're struggling to find employees. Where can we fit into this?' That's what brought us together. This wouldn't have happened 20 years ago."

McCrary said the FORGE Foundation doesn't consider itself a competitor of large-scale industry and manufacturing, but as an equally viable option.

In its two years, the FORGE Foundation has hammered that message home and McCrary said she's beginning see the fruits of that effort.

"We are starting to see that mindset change," McCrary said. "The latest data shows 27 percent of Mississippi kids will get a two-year or four-year degree of some kind. So our question is, what happens to the 73 percent who don't? Who are these kids? What are they doing? Next year, there will be over a million skill trade jobs open in the United States and 97 percent of construction firms are currently hiring. If we don't start changing these kids now, who is going to work for us? That's basically where we are. Skill trade-wise, it's becoming a lost art."

While Wednesday's event was primarily about exposing kids to the skill trades, it was also useful for the FORGE Foundation.

"We're going to sit down after this is over and talk about what we've grasped from all this," McCrary said.

Part of that effort came from the Mississippi Secretary of State's Office, which set up six voting booths allowing students to cast ballots.

McCrary said the ballot was used to collect data from the students, which included questions gauging their interests in five skill trades -- and whether they planned to stay in the state upon graduation.

"This was the first time doing this, so we think we'll get a lot of good information," McCrary said.

Wednesday's event was a collaboration between the FORGE Foundation, EMCC and The Mississippi Construction Education Foundation.