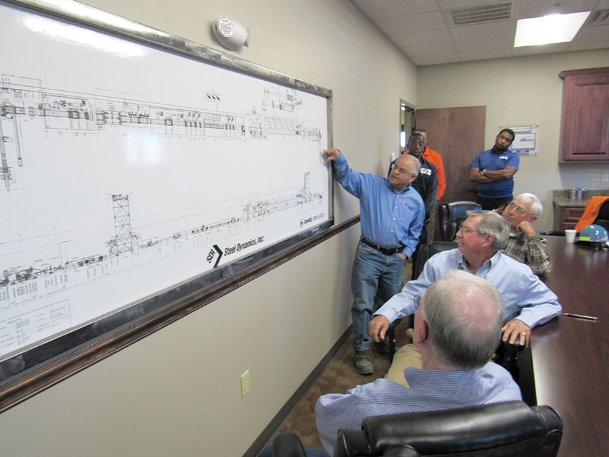 Steel Dynamics Columbus general manager Madhu Ranade briefs Lowndes County supervisors on SDI's paint line operations before a tour of the facility Thursday. Ranade said the $94 million facility is the most advanced paint line in the U.S. Supervisors also toured SDI's third galvanizing line, which is currently under construction and is expected to be in operation in mid-2020. Photo by: Slim Smith/Dispatch Staff

Steel Dynamics Columbus paint supervisor Anthony Mabins explains the operations of SDI's paint line to Lowndes County supervisors during a tour of the facility Thursday. The $94 million paint line, which has been in operation for two years, has allowed the company to diversify its product line.
Photo by: Slim Smith/Dispatch Staff

Lowndes County District 3 Supervisor John Holliman, outfitted in a bright orange safety coat, hardhat and safety goggles, paused for a moment, looked up at the skeleton of steel girders high above and said to no one in particular: "It's really amazing what they've done out here."

Holliman's observation was pretty typical of the reaction of county officials as they toured Steel Dynamics' state-of-the-art paint line Thursday afternoon before moving across to the steel mill's northwest corner to view the progress of the mill's third galvanizing line, a $140 million investment that SDI Columbus general manager Madhu Ranade said will help the company capture more of the automotive steel market.

All five supervisors, along with County Administrator Ralph Billingsley and Chief Financial Officer Lloyd Price, attended the tour, which lasted about an hour with Madhu briefing his visitors on the paint line operation and construction of the new galvanizing line.

The paint line, which has been in operation for about two years, cost $94 million to build, Ranade said.

"It's the most advanced paint line in North America," Ranade said.

Ranade explained the paint process, noting the processes the steel goes through along the way, beginning with a series of cleaning operations before primer and finish coats are applied and dried by driers whose temperature can be set as high as 750 degrees.

Ranade said there are more than 1,400 tints available, all made to the customer's specifications.

"I can't tell light blue from dark blue; our customers are very picky," he said. "I was amazed to learn there are 14 shades of white alone."

After the tour of the paint line, the visitors were taken to the site of the new galvanizing line.

Work began on the line in July and should be completed and operational in mid-2020.

"But everybody knows I expect it to be finished before then," Ranade said.

"Galvalume is a mixture of zinc and aluminum and is more corrosion resistant," Ranade said. "The applications are for things like roofing, siding, garage doors, lighting, appliances."

The focus now is on galvanized steel.

"The new galvanizing line will allow us to increase production for automotive," Ranade said. "We would like to have about 20 percent of our product going to the automotive industry."

Ranade said the new paint line has created 43 jobs while the galvanizing line, when completed, will add an additional 40 jobs, pushing the total employment in the Columbus facility to more than 800.

Ranade said total impact of the plant on jobs goes far beyond that, however.

"For every steel job we create, we generate seven other local jobs," he said.