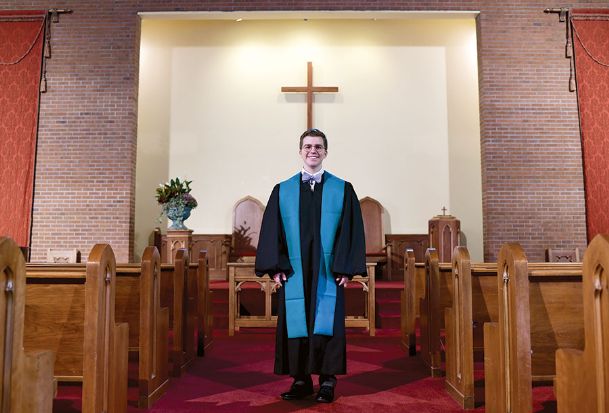 On a typical Sunday, in congregations across the country, someone is missing while fulfilling an obligation to the military as a member of the National Guard or Reserves.

It's a little different at First Presbyterian Church of Columbus, where one Sunday per month the person is not missing from the pews, but from behind the pulpit.

Bela "B.J." Chain was ordained as a minister and installed as pastor at First Presbyterian on Aug. 18, but he holds another title. Chain is a first lieutenant in the 439th Multifunctional Medical Battalion on the U.S. Army Reserves.

For the past three years -- and the next five -- Chain travels to Fort Dix, New Jersey, in his role as an Army chaplain.

That its new pastor will miss Sunday services once a month seems not to faze the folks at First Presbyterian, though.

"It didn't sway us at all," said Lee Hackett, who represented the church's deacons on the six-person nominating committee. "We were unanimous in our decision to bring him on board. His competencies matched the desires of our church members more than any other candidate we looked at."

Chain, 25 and a native of Oxford, started sending out inquiries for a pastor's position after completing his divinity degree at Princeton Theological Seminary, where he studied as part of the Army's delayed-entry academic program.

Given his military commitment, along with his age and lack of pastoral experience, Chain realized the odds might not be in his favor.

"I was very forthcoming about everything," Chain said. "Obviously, I'm very young and this would be my first job as a pastor. Those things can't be hidden. But as far as everything else, I told them from the beginning, there is this other commitment."

So, Chain was surprised at the church's response.

"They didn't take long at all," he said. "They got back to me, I think, 24 hours after I interviewed with them. I took it as a sign that this was my calling."

It's not the first whirlwind turn of events in Chain's move into the ministry, though.

He landed an Reserve Officer Training Corps scholarship to Ole Miss and was not far from graduating when he learned of the Army's Education Delay Program, which allows students three-to-five years to study for an advanced degree before beginning their military service.

"I didn't find out about it until two days before the deadline for applying," said Chain, who was on vacation with his parents when he learned about the program. "I borrowed my mom's computer and spent half a day writing the essay for the application, probably the worst essay I had ever written."

To his surprise, Chain was admitted to the program and began his theological studies while serving as a chaplain, which was part of his training.

Over the next three years, Chain worked both at churches and hospitals. Before long, he sensed his calling would be that of a pastor rather than a chaplain.

The two positions are more similar than you might expect.

"For a lot of people, the work of a pastor or a chaplain is the Sunday sermon or, with a chaplain, a field service," Chain said. "It's what they see. But as far as day-to-day, it's about personal relations, using those interpersonal skills, checking on people. Those kinds of things are the majority of what a chaplain does and what a pastor does as well."

Even so, Chain admits he's still learning the ins and outs of being a pastor.

"The church members have been very gracious to me," he said. "They know I'm new to this. I've got the academics, the practical stuff. But with the day-to-day things, they've helped me greatly. They've allowed me to learn and have been as supportive as I could hope for."

Chain realized it would take a special church to work around his once-a-month absence.

But it goes both ways, Hackett said.

"We knew it would take a special person to come to our little church (125 members) in Columbus," Hackett said. "He has knocked our socks off. He really has."