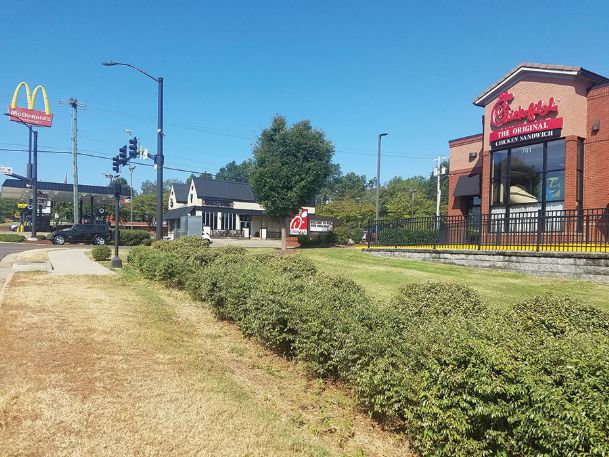 A strip of sidewalk ends abruptly in front of Chick-fil-A at the intersection of Highway 12 East and Spring Street. The city will being construction in about a month to extend the sidewalk by 112 feet, one of three such projects along the highway. Photo by: Tess Vrbin/Dispatch Staff

The stretch of Highway 12 West between the Twin Oaks apartment complex and Maple Drive receives enough foot traffic that the path is worn into the ground. The city will put 1,669 feet of sidewalk between Taylor Street and the Avenue of Patriots to make this path safer to walk.
Photo by: Tess Vrbin/Dispatch Staff

Timiko Rieves walks from his home in Green Oaks to Walmart along Highway 12, just west of Tabor Street. Rieves walks this route most days and said it should have had a sidewalk years ago for safety reasons. The city will start building a sidewalk there in about a month.
Photo by: Tess Vrbin/Dispatch Staff 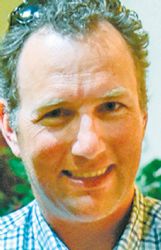 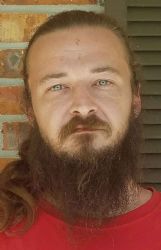 The stretch of Highway 12 outside the Green Oaks neighborhood did not have a sidewalk when Timiko Rieves came to Starkville to visit relatives in the mid-1980s.

When he moved to the same neighborhood from Chicago a couple of years ago, he wondered why the city still hadn't put in a sidewalk, he said, given people walk every day along the side of the highway next to the westbound lane.

Rieves is one of many local residents who walk daily on the well-worn strip of dead grass along Highway 12 between the Twin Oaks apartment complex and the Maple Drive entrance to the Green Oaks neighborhood.

"Some people choose to walk in the bike lane, but still, that's not safe," Rieves said.

The city will address the issue in about a month by installing a sidewalk between Taylor Street and the Avenue of Patriots and in two other frequently walked sections of Highway 12, with the goal of making the road safer for pedestrians, city engineer Edward Kemp said.

"We're providing a safe connection for them to do that, as opposed to them just doing it without the proper facilities," he said. "(Right now) it's a dangerous situation."

Tamaran Bardwell said she sees Armstrong Middle School students walk along Highway 12 after school every day, and adding a sidewalk could make their trek safer, she said. Sometimes the trash they leave behind gets in the yard of the Aspen Road house she rents.

"It'll be nice if they did (put in a sidewalk), and it might cut down on some trash in the yard too," she said.

The city's plan for Highway 12 sidewalks

The engineering department has a list of 14 sections of sidewalks it wants to add to fill in the gaps on Highway 12, from Stark Road to just east of Spring Street. The first three sections are a 21-foot strip connecting the Enterprise Rent-a-Car building to Lindbergh Boulevard, a 112-foot extension in front of Chick-fil-A at the Spring Street intersection and the 0.35-mile stretch of road from Taylor Street to the Avenue of Patriots.

On Tuesday, the Starkville Board of Aldermen approved a $277,600 bid from Simmons Erosion Control Inc. to install the 1,802 feet of sidewalk. About $222,000 comes from the Mississippi Department of Transportation, and the remaining $50,000 will come from bond money the city had set aside for sidewalk projects.

Construction on the three sidewalk installations will begin in early or mid-November, and take about a month to complete if weather allows, Kemp said.

"A lot of people don't really know about the back entrance and might not come through (there), so it could impact our sales," Miller said.

That said, the sidewalks once installed could result in slightly more business to Chick-fil-A on Mississippi State University game days, he said. Otherwise, he thinks they will have little affect on the restaurant, since little of Chick-fil-A's traffic is foot traffic.

The three locations are among the highest priorities on the 14-item list, according to Tuesday's meeting agenda. Three sections in the mile between Stark Road and Taylor Street, the easternmost part of the scope of the project, are the lowest priorities.

Two high-priority sections on the list are off the table for now because they would involve temporarily taking the land from its owners, which Kemp said "is a much more time-intensive process." The sections are between Vine Street and Hancock Street near the intersection of Montgomery Street and Highway 12.

Kemp said the city is not actively seeking funding for the remaining sidewalk projects at the moment.

Lee Horsley bikes from his home near Armstrong Middle School to Lowe's twice a week, and his bike wobbles at the intersection of Highway 12 and Tabor Street.

The terrain is rough and can be dangerous, and bikers have to be especially cautious around storm drains and when crossing a curb to get into an intersection, Horsley said.

"This highway's been here for years and they didn't consider putting in a sidewalk or a bike path," he said. "I thought they were going to do it when they redid this highway (in early 2018), but they didn't."

Not everyone is looking forward to the new sidewalk. Eli Jones walks almost every day from his Twin Oaks apartment to Montgomery Street to visit family, and he said the sidewalk will make the 1.6 miles more difficult in the current weather.

"If they had a covered sidewalk, maybe that would make sense because it's so hot," he said. "Outside of that, it just makes it hotter with the reflections off the concrete."

The construction will likely not interfere with Jones' walk most days, he said. He often sees people bike along the makeshift path, and the sidewalk would make it safer for them, he said.

"With the walkers, I don't think most of them would prefer it, but the bikers might," Jones said. "A bike path might make sense. Something different than a sidewalk, maybe."