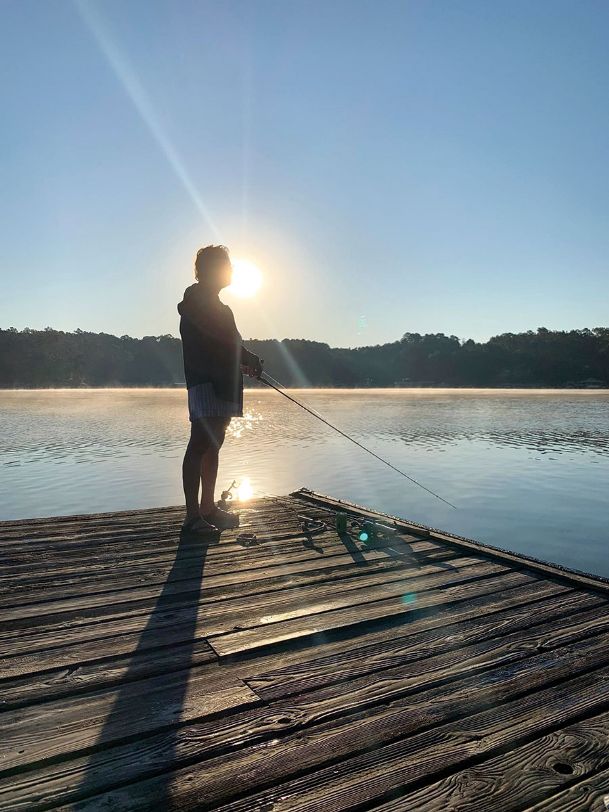 Lowndes County Sheriff's Office Lt. Tammy Prescott fishes off a dock at Smith Lake in Alabama earlier this year. Prescott died Friday, at age 57. She was known throughout the community for her volunteer work and community service, especially at Camp Rising Sun. Photo by: Courtesy photo

Tammy Prescott, right, drives a rented convertible with her friend Karen Cooley, during a trip to the Mississippi coast earlier this month. Prescott, a community volunteer and lieutenant with Lowndes County Sheriff's Office, died Friday from cancer. "We rented (the) convertible and she was in pure heaven taking it with the open top, wind in hair and blasting '70s and '80s (music)," Cooley said.
Photo by: Courtesy photo

In June, Lt. Tammy Prescott was up until 3 a.m. painting individualized pictures on pillowcases for children at Camp Rising Sun, the annual summer camp that serves children with cancer.

The Lowndes County Sheriff's deputy and long-time volunteer for organizations all over the Columbus area had at that point been fighting her own battle with cancer for about a year and was determined not to let it interfere with her involvement at the camp. When the campers went to arts and crafts the next morning, said Prescott's friend and fellow Camp Rising Sun volunteer Paula Sudduth, their individual pillowcases were there waiting for them.

"There wasn't a 'no' in her vocabulary," Sudduth said.

A native of Steens, Prescott was a 25-year law enforcement veteran who worked for LCSO nearly 20 years. Well-known throughout the community through her job, where she moved between the Lowndes County Courthouse and the sheriff's office and worked closely with trustees at Lowndes County Adult Detention Center, Prescott also had a hand in community service projects and nonprofits such as the YMCA, the Boy Scouts and of course, Camp Rising Sun, where she volunteered every summer for more than 15 years.

"I don't think anybody can tell you how many lives she's turned around with her community service work," Sudduth said.

Lowndes County Sheriff Mike Arledge said losing Prescott has been hard on the entire department, and that Prescott was a friend, rather than just an employee. He and several of Prescott's friends outside the department said she loved her job and did not leave even after being diagnosed with cancer.

While Arledge has known her several years, he said Prescott became particularly close with him and his family after he became sheriff in 2011. She had planned to retire about the same time as him, early next year.

"She said she was going to take me fishing when we both retired," Arledge remembered.

Fishing was one of Prescott's many hobbies, said her friend Betty Clyde Jones, who said she'd never known anyone other than Prescott to catch two fish while fishing off a particuar dock they liked on Smith Lake in Alabama. Prescott did not shy away from the outdoors, and also liked hunting and was "never happier" than when she was mowing the grass at Camp Rising Sun.

She was also a great cook, said her friend Fred Kinder, who said she cooked for elderly people in the community.

"(Her barbecue ribs were) absolutely melt in your mouth, off the bone," he said. "They were so good."

Deputy circuit clerk Ann Marie Langford, who knew Prescott at least eight years through her job and through Camp Rising Sun, said Prescott would make food for the bailiffs, deputies and circuit clerk's office staff at the end of every circuit court term. It was a potluck-style meal, Langford said, but Prescott was always in charge of the main meat course.

"This past time was some of the best pork tenderloin," Langford remembered.

During those court terms, Prescott worked primarily with defendants going in and out of court for hearings and trials. Arledge said Prescott would always encourage and witness to the inmates.

"They remembered her and they appreciated her taking that time," he said.

That was just one example of her encouraging nature, he said, particularly toward the end of her life as friends and family were becoming increasingly worried about her health.

"She was always trying to lift people up, even though we were the ones who should have been lifting her up with her sickness," he said.

But Prescott was more than just her words of encouragement, Sudduth said. When necessary, she would roll up her sleeves and get to work.

Back in 2017, Sudduth, who runs the arts and crafts every year for Camp Rising Sun, requested help clearing the river bank of trees, bushes and brambles behind the "chicken coop" -- where arts and crafts was held -- and wanted volunteers to help build and wire a back porch behind the building. Some of the children had disabilities that prevented them from hearing in the old building, she said, and she wanted them to still be able to participate fully.

It was Prescott who, along with some help from LCSO's trustees and people she knew in the community, cleared about 600 or 700 feet of the river bank and built the back porch.

None of that is a surprise to Sudduth, who called Prescott the camp's "go-to girl" for her tendency to fix whatever needed fixing.

"If Tammy Prescott looked at you and said she was going to do something ... as the old saying goes, you could take it to the bank," she said.

That went for the trustees at the jail, said Kinder. The jail's trustees are non-violent offenders who do work around the sheriff's office and courthouse. Prescott also took them to community service projects around town. Every year before and after Camp Rising Sun started, they would go to camp with Prescott and help clean up the grounds and cabins.

"She instilled in them what camp is and what it does," Kinder said. "And they were absolutely tickled to death to be able to do anything they could for the kids. ... That was impressive, just to see how hard they worked because it was for kids with cancer. Tammy just instilled that in them. Hopefully it turned some of their lives around."

Kinder said the trustees had respect for Prescott, who would add some of her own money to their jail accounts so they could make purchases. One year an inmate even volunteered to stay an extra day in jail to clean up the camp.

Prescott's devotion to camp went further than clean-up though. She was in charge of the t-shirt design for the camp every year -- so much so, Sudduth said, that some campers and counselors are planning to wear the shirts she designed to her memorial Monday.

It was that combination of artistic talent and a spirit for community service that had Prescott up at 3 a.m. painting pillowcases for children who asked for certain pictures or for her to write their names in funky-shaped letters. Even when Sudduth told Prescott to go to bed, Prescott just replied she'd "sleep all day Sunday," after all the campers had gone home.

"Most people after working all day long wouldn't stay up till 3 o' clock in the morning to paint a dog or a tree or to write some child's name with bubble letters on a pillow case," Sudduth said.

Prescott's memorial will be held at First United Methodist Church Monday at 1 p.m., with the funeral service at 3 p.m.