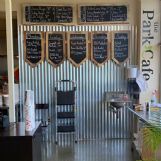 A coffee house and restaurant under the same ownership as Starkville Cafe and The Camphouse had its official opening on Mississippi State University's campus this week.

The Park Cafe, located on Technology Boulevard in Thad Cochran Research, Technology and Economic Development Park at MSU, has been open for business since July and had a couple months to get on its feet before a ribbon cutting marked its formal opening Tuesday, restaurant owner John Peeples said.

Though open only three hours on week days, the cafe offers catfish, sandwiches, salads and other lunch menu items as well as coffee. It also joins a group of restaurants that have been operating for years in Starkville, and is the first of Peeples' restaurants to open on MSU's campus.

Peeples said Starkville Cafe will have its 75th anniversary next year, and The Camphouse has existed for almost five years. Management from both restaurants attended Tuesday's ribbon cutting, along with affiliates of MSU.

"We have a great management team that works well together will all three restaurants," he said. "(They) kind of feed off each other's strengths and weaknesses."