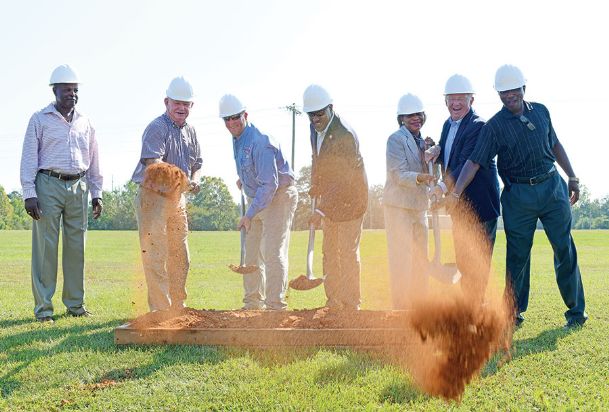 MACON -- A small crowd gathered on the front lawn of Superior Catfish Products in Macon on Tuesday to celebrate the groundbreaking for an expansion that will double the size of the facility and bring new jobs to Noxubee County.

"I get a bigger satisfaction out of an announcement like this in rural Mississippi than I do with the bigger announcements," said Mickey Milligan, chief economic development officer for the Mississippi Development Authority. "This is very meaningful to Macon and Noxubee County."

The catfish processing plant will add a new production facility and turn the current one into dry storage space, bringing the total square footage of the plant close to 74,000, general manager Fred Johnson said.

The project will cost about $17 million and add 25 jobs to the existing 145 at Superior Catfish, as well as 50 to 60 construction jobs, and it should be finished and in operation by January 2021, he said.

The plant expansion is necessary to meet the demands of growing catfish markets, Superior Catfish board president Phillip Giesbrecht said. The plant serves 65 local catfish farmers, is currently producing at maximum capacity and is expected to produce 20 million pounds of catfish this year. Production should increase 20 to 25 percent after the expansion, Giesbrecht said.

Cotton, corn and soybean farmers in Noxubee County also farm catfish to supplement their income and diversify their products, Johnson said. Dips in corn and soybean prices create cheap feed for catfish, lowering the cost and increasing the profitability of catfish production, he said.

"That's why it's important for our farmers to have a good outlet for their catfish, because it helps their livelihood and helps keep the farms going," Johnson said.

Clark Seiler has been farming catfish in Noxubee County for almost 30 years and said the nearest plants besides Superior Catfish are all based in the Delta region or Louisiana. The plant's increased production capacity will increase local demand for catfish in already growing markets, he said.

Another reason for the expansion is to bring the facility into compliance with U.S. Department of Agriculture code.

"We are currently processing with USDA approval, but the plant was never built with that in mind, being a USDA facility," Johnson said. "We have some ongoing issues we have to work with daily that are costing us. This expansion will help us meet USDA's requirements in a better way and keep us from spending so much money to keep the facility meeting those demands."

The plant has been in Macon since the late 1970s, and a group of local catfish farmers bought the plant in 1994 and made it a co-op, Johnson said.

Mississippi Land Bank will fund most of the expansion, especially during the construction phase, regional vice president Bart Harris said. The land bank is part of the federal Farm Credit system to support agriculture in rural areas.

BankFirst was involved in the funding and construction of the original plant and is now funding part of the expansion, said Bill Brown, BankFirst's community bank president in Macon.

Noxubee County District 1 Supervisor Larry Tate thanked both local farmers and all the agencies involved for their investment in the county.

"My heart is overwhelmed today because of this project," Tate said. "Anytime you can sustain jobs and make an addition to what you've already got, that's a plus. You don't see that happening around the state of Mississippi, (but) it's happening right here in Noxubee County today."