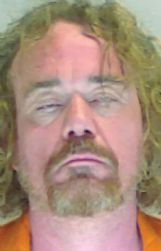 A West Point man in a stolen car has been arrested for his involvement in a chase with law enforcement from Alabama into Lowndes County Saturday.

Jason Eugene Hargrove, 42, of Lone Oak Road, has been charged in Lowndes County with reckless driving, resisting arrest and being in possession of a stolen vehicle, according to a Lowndes County Sheriff's Office press release. He will also face charges in Alabama.

At 1:40 a.m. Saturday, officers from Vernon Police Department and Lamar Count Sheriff's Office contacted LCSO to warn of a suspect driving a 2006 Ford Fusion who was entering Lowndes County on Highway 50 East, the press release said. The Ford had been reported stolen out of Carroll County, Alabama.

Lowndes deputies set out spike strips to damage the driver's tires and disabled the vehicle.

Hargrove ran from the vehicle and was found in a cotton field where he was arrested, according to the press release.

Hargrove is in custody at Lowndes County Adult Detention Center on $10,000 bond.