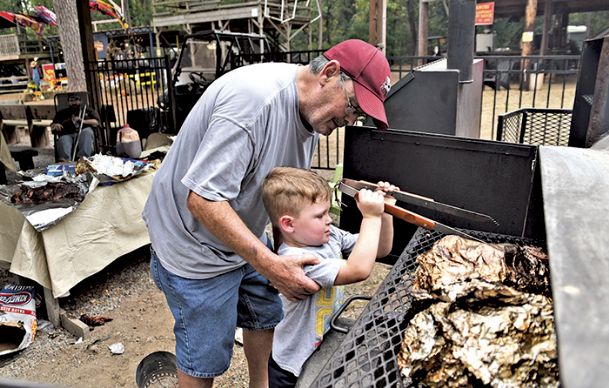 Joe Langford helps his grandson Rhett Hall, 3, take meat off of the grill in this file photo from 2017 Roast-n-Boast. The festival may go without funds from the 2-percent tourism sales tax for this year's event. Photo by: Dispatch file photo

Officials with Lowndes County, the city of Columbus and Columbus-Lowndes Convention and Visitors Bureau all said they were open to a sit-down meeting to clarify language in interlocal agreements among the entities regarding the funding of local events.

But that suggestion came only after pointed barbs and letters exchanged through local media outlets between the CVB and county supervisors, and after multiple events went without funding from any of the entities.

District 5 Lowndes County Supervisor Leroy Brooks suggested a joint meeting during Friday's board of supervisors regular session while referencing a letter CVB board attorney Chris Hemphill wrote, which printed in Thursday's edition of The Columbus Packet. In the letter, Hemphill demanded an apology from supervisors who had been quoted in The Packet as saying the CVB gave "the runaround" to organizers of the annual barbeque competition Roast-n-Boast, who had gone before the CVB board asking for funding.

"What I've said ... at least at the beginning of the year is that we need to get with (Columbus Mayor Robert Smith) and (CVB Executive Director Nancy Carpenter) and get this thing worked out because it doesn't serve any useful purpose for them printing letters in the paper about what we said," Brooks said, later adding Hemphill's letter was "petty."

Carpenter did not respond directly to Brooks' comment, but said she would be happy to meet with Smith and supervisors to further discuss who would fund what events.

CVB board president Steve Wallace said at the board's regular meeting Monday that he had been thinking the same thing.

"The county and the city get a pretty big chunk of money, and by legislative action it has got to be spent on tourism," Wallace said. "... I think it would be a great idea were we to contact the city and county and see if we could just sit down."

CVB signed interlocal agreements with the city and county earlier this year to divide funds collected from the 2-percent restaurant sales tax, which brings in about $2 million per year. The state Legislature passed a law mandating the city receive $400,000 for parks and tourism-related events, the county $300,000 for parks and tourism-related events, the Golden Triangle Development LINK $250,000 and CVB the remainder. Per the interlocal agreements, CVB must allocate, from its share, $15,000 each for four designated festivals in the city and $10,000 each for three county based festivals.

Since the implementation of the 2-percent tax, which just came back on the books in June after a year of not being collected, events which previously received some funding from CVB have gone without unless specifically listed in the interlocal agreements.

One such upcoming event is the Roast-in-Boast, scheduled for Oct. 4-5. Earlier this summer, organizers asked the CVB for $5,000 to help with the event, which organizer Kris Davis said is what CVB provided the event in 2017.

Though Carpenter provided Davis with promotional materials like visitors brochures, she said CVB did not give Roast-n-Boast any funding this year.

Davis said she and other organizers went first to the city council, who told them the city didn't have the money, and then back to CVB.

"We were directed to go to the county, who then directed us back to the CVB," she said.

She said Roast-n-Boast will have to get its money primarily from corporate sponsorships and private fundraisers this year.

Carpenter told The Dispatch Friday CVB doesn't have funding available to provide money to festivals and events not specified in the agreements.

"We have a budget and we're going to adhere to our budget," she said. "We really don't have flexibility at this time."

Roast-n-Boast isn't alone. Carpenter said in the past CVB had a budget of about $167,000 to fund cultural events and sports and fishing tournaments. Some of those include the annual Tennessee Williams Tribute Festival, which was held earlier this month, the upcoming SLW Fishing Tournament, the 55 and Over Tennis Tournament held in the spring, Wings Over Columbus and Fireworks on the Water -- which CVB funds with Columbus Air Force Base -- multiple soccer tournaments and other sporting events.

While some events, like Tennessee Williams Tribute, were held without CVB funds this year, others, like Fireworks on the Water, were not held at all.

It was the Roast-n-Boast funding issue that prompted comments from county supervisors and the letter from Hemphill.

"We had our attorney write the letter because it was said that we gave people the runaround, which we do not, and that we were not telling the full truth," Carpenter said. "Well, we did. We told them, 'This is what the city can use the money on.' I just went straight to the interlocal agreement."

However, neither the city nor the county provided funding for Roast-n-Boast, Davis said, adding the event would rely on corporate sponsorships and planned fundraisers instead.

While the city could not provide the funding due to financial constraints, supervisors' board attorney Tim Hudson said he was concerned state law legally prohibits the county from funding events not specified in other legislation.

"Sort of a real general rule is the municipalities can spend money on anything unless it's prohibited," Hudson said. "Counties are the exact opposite. We can't spend any money unless it's authorized. ... There's been several things in the past that have been like one-time things (where) we would get legislative authority to do that."

Carpenter argued language in the House Bill that governs the use of the 2-percent tax says supervisors can use the county's $300,000 for tourism.

But Hudson said that wording is too vague and may not override the already-existing legislation about what counties can and can't fund. He said he would rather have a legal opinion from the state attorney general's office before donating money to Roast-n-Boast or other events.

Also, both the city and county have earmarked their respective share of the tourism tax to fund infrastructure improvements at parks.

Sanders said the Roast-n-Boast just proved the city, county and CVB needed to meet to discuss policy moving forward because it would be a problem for CVB to only fund festivals listed in the agreement.

"Roast-n-Boast brings in considerable business," he said. "People come from all over and stay in hotels. It's a big deal. They're bringing money in. It's not a festival. It's a tourism event, but the CVB doesn't want to fund it for some reason."

"It would probably be a good idea for all parties to sit down and go over this and make sure we're all on the same page," Smith said.

CVB board member DeWitt Hicks suggested Wallace and Carpenter have a prepared list of events they feel deserve funding when the meeting takes place.

Carpenter agreed, pointing out fishing tournaments and sporting events are also major drivers of tourism in the area.

"What we don't need to do is wait (to have the meeting)," she said.