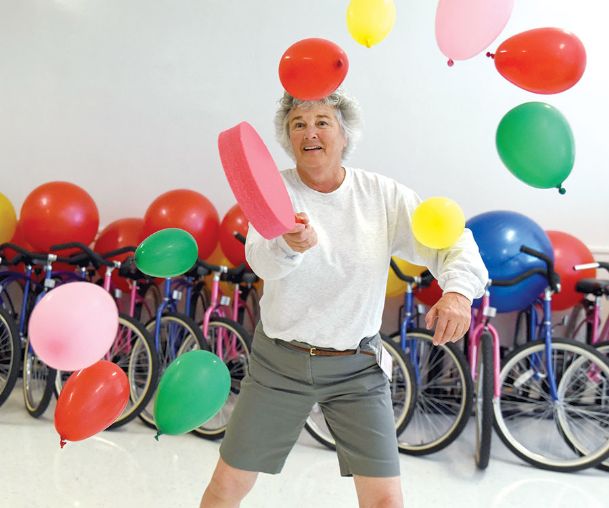 Franklin Academy physical education teacher Terrie Gooch takes a wack at a balloon Friday during a P.E. class. "We want the kids to be happy, to laugh and have fun," said Gooch, who has taught P.E. at the school for 13 years. Photo by: Deanna Robinson/Dispatch Staff

Franklin Academy physical education teacher Terrie Gooch takes a spin on one of the stationary bicycles at the school. Gooch uses a wide variety of activities to keep her students engaged and moving. "It's a natural thing for (kids) to want to move," she said.
Photo by: Deanna Robinson/Dispatch Staff

Among the teachers at Franklin Academy, Terrie Gooch is probably the only one who doesn't encourage her students to sit still.

After all, she is the school's physical education teacher and has been for 13 years now. If ever someone was perfectly equipped for the job, it's the white-haired 64-year-old who never really managed to be still herself.

"I'm easily excited," Gooch admitted. "I do have my quiet times that I enjoy, but most of the time, I like to be moving, doing something, going somewhere and I like transferring that to the children."

For the past four decades, Gooch has divided her time between coaching and teaching, so much so that the two seem intertwined.

As a senior at New Albany High School, Gooch was the top-ranked girls' tennis player in singles, doubles and mixed doubles, earning two invitations to John Newcombe's prestigious summer camps in Texas and continuing her tennis career at Mississippi University for Women, where the women's team regularly thumped the larger schools that were on their schedule in the days before Title IX.

After her competitive amateur career ended, Gooch turned to coaching -- seven years as coach of the Heritage Academy boys and girls teams, seven years as The W's tennis coach and a couple of years at Lee High.

She became the tennis pro at Magnolia Tennis Club in 1994, a position she held until she began her job as P.E. instructor at Franklin Academy.

For the first time in more than 30 years, Gooch wasn't teaching tennis. But she applied many of the same principles she used in coaching to her new job.

"It's a natural thing for them to want to move," she said. "If you say to a child, 'Let's run from here to there,' you can see it in their faces. As soon as they start running, they are smiling."

"We want them to be happy, to laugh and have fun," she said. "So that's something I'm always looking to do with the kids. Along the way, they're also learning about life lessons -- the value of working hard, learning, improving, being a teammate, how to look someone in the eye when you are speaking with them, how to say 'excuse me' if you bump into someone, so many things."

"She does a great job of engaging the kids," Labat said. "You can see that she loves what she does every day. For her, a lot of it is about building relationships with the children."

Gooch said that both teaching and coaching can be mundane.

"There are so many skills you can teach," she said. "It's repetitive. So what I've learned to do is think about it another way. It's about that person or that group of children. It's my time with them. The teaching is what we're doing in that time. To me, it keeps it interesting when I look at it that way."

For all the championships she has won, both as a player or a coach, the pay-off is the memories people share.

"My most gratifying thing is when past students and players come up to me and say, 'Hey, coach. Do you remember?' and share a memory that is special to them," she said. "That always makes my day and makes me smile."