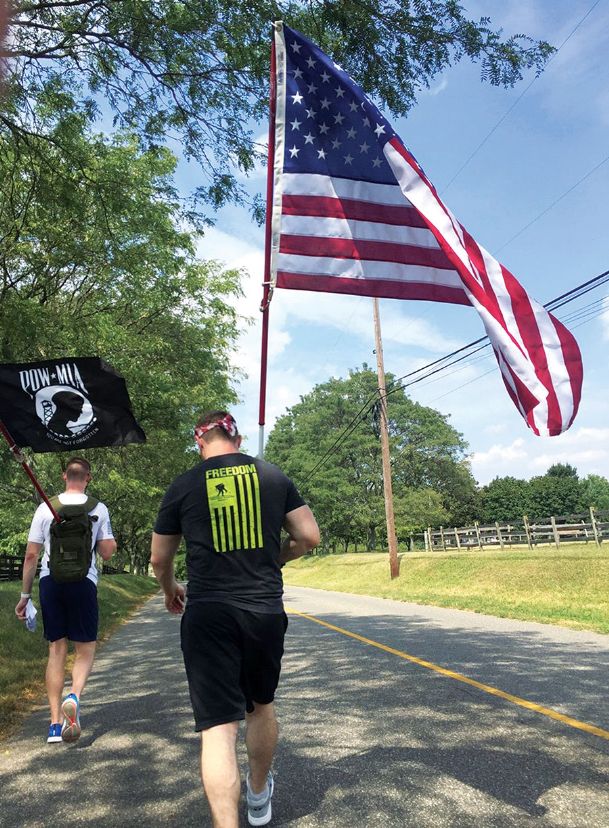 Maj. Jonathan Leetch, right, walks carrying the American flag while on a 100-mile march from New Jersey to Ground Zero in this 2018 photo. Leetch and Capt. Matthew Carpenter, both stationed at Columbus Air Force Base, made the trek again this year in a group of about 16 people who delivered the flag and a more than $10,000 donation to the National September 11 Memorial and Museum on Wednesday, the 18th anniversary of the attacks on the Twin Towers. Photo by: Courtesy photo

Air Force Capt. Matthew Carpenter (back row, fourth from left) and Maj. Jonathan Leetch (fifth from left) pose with a group of marchers in New York City on Sept. 11, 2018 after the group spent more than 30 hours carrying the American flag from Joint Base McGuire-Dix-Lakehurst in New Jersey to Ground Zero New York to commemorate the Sept. 11, 2001 terrorist attacks. Leetch and Carpenter participated in the march again this year, helping to raise more than $10,000 to donate to the September 11 Memorial and Museum.
Photo by: Courtesy photo

Air Force officers Maj. Jonathan Leetch and Capt. Matthew Carpenter had been walking 32 hours, without stopping to sleep in a hotel or eat at a restaurant, when they arrived at the National September 11 Memorial and Museum on Wednesday.

It had been 18 years to the day since the terrorist attacks on the World Trade Center on Sept. 11, 2001.

"Getting to Ground Zero on the day of Sept. 11 is without question one of the most emotional things you can do," said Carpenter, who is currently stationed at Columbus Air Force Base along with Leetch. "I cry every time walking up to the memorial pools around One World Trade Center. And then walking down West Broadway, you turn the corner and you first see the World Trade Center from a couple of miles away. It's amazing."

The two were part of a group of 16 people -- primarily military personnel -- who began a march of about 100 miles from Joint Base McGuire-Dix-Lakehurst in New Jersey on Tuesday, carrying protein bars, Gatorade and an American flag.

The group set out from McGuire at 8 a.m. Tuesday and arrived at Ground Zero at 4 p.m. There they presented the flag and a donation of more than $10,000 to representatives from the memorial that were raised through the group's Facebook page.

For Leetch, who has participated in the march since 2015, what stands out to him most about it is how selfless the participants are every year.

Leetch was a sophomore in high school in fall 2001, trying to figure out what career path he was going to pursue. His family had a long history of military service, and he wanted to fly, but it was the attacks that cemented the decision to join the Air Force.

"I definitely decided this is what I want to do, if nothing else, to pull my weight in the job that was at hand," he said.

Carpenter was even in younger, in third grade and living in Louisiana. He can remember watching the second plane hit the tower on television, though he can't remember if it was live.

"I was just old enough to kind of realize what was going on when this all happened in 2001, so it was a big driving factor for my joining the military to begin with," Carpenter said. "Now,all these years later, getting to give back a little bit more is all kind of part of the mindset.

"This year we have people that are enlisting in the military that weren't even alive when all this happened," he added. "They'll never have the experience of just watching the planes hit the towers. It's easy to forget as time passes on, so every little bit to help preserve the memorial and that memory -- enough can't be said for that."

Leetch and Carpenter said the march began at the base in McGuire in 2013. Leetch heard about it the next year and became determined to "jump into" it.

In the Air Force, Leetch said, squadrons take American flags that have flown during missions in Afghanistan, fold them up with a special certificate and present them those involved in the mission. Those people then present it to their families or other loved ones who have supported them.

"When I heard they were taking one of these flags, putting it on a pole and literally walking it from McGuire, where guys go off to (missions in) Afghanistan, bringing it to the memorial, I thought that was a great idea," he said.

Leetch first marched in 2015 and has done it every year since, recruiting Carpenter last year. They and the other participants, most of them from McGuire, take time off work and pay for whatever travel arrangements and other expenses that come with participating in the march. Participants this year flew in on Monday and were at McGuire the next morning.

Then the march began.

It's a different route every year, Leetch said, and it does occasionally end up on a highway where the support vans have to turn on their hazard lights. By the time they've been going for more than 12 hours -- when "you're starting to slow down," he said -- enough people have seen them and there has been enough buzz about the march generated on news and social media that the donations online begin to pick up.

The group surpassed their $10,000 goal this year, with $10,475 raised according to the group's Facebook page. Since Leetch has begun participating, they've raised more than $30,000.

Both officers talked about the camaraderie and getting to achieve a difficult feat with like-minded people as part of what's special about the walk.

"There's 16 plus people limping around today from doing that," Leetch said Thursday. "It's not easy, but with a huge payoff and being able to rely on those people that you know will also pull their weight and do what they need to do in order to accomplish getting there on time with the funds we wanted to present and the flag we wanted them to fly was huge."

Carpenter called it a "one-of-a-kind" experience.

"You're with your buddies and you're getting to do something that not a whole bunch of people do," he said. "It's a huge personal challenge. Just having to be able to exert yourself and put yourself through all of that is awesome."

Leetch is also excited at the thought of the march growing. He said he's heard from more people this year who wanted to know more about it or participate than any year before.

"It went from 'Hey this would be a great thing to do. Here's a couple of thousand dollars' to 'What is the next march going to look like and then later on what is it going to look like? Is it going to be hundreds of people?'" he said. "... It's pretty cool because I feel like the potential to really help out the memorial, and keep it the way that is, is really there."

He said he's extremely grateful, not only to the marchers and donors, but to their senior officers at CAFB who have supported their decision to take time off work for the march. It makes him feel there are other people who know how important it is for the country to remember the events of 9/11.

"Not forgetting why that memorial's there, how people came together, why people are deployed and away from their families so often, understanding why that is and remembering -- that's huge too," he said.