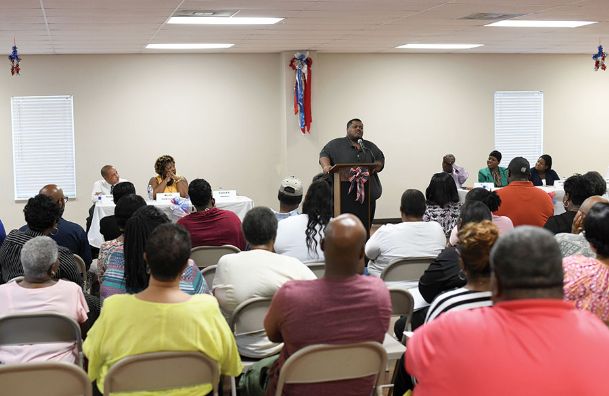 Patrick E. Holmes speaks at the candidate forum held for the Ward 1 council seat Tuesday night at Townsend Community Center. At the event, each candidate had the chance to speak about their campaign platform. Retired Columbus Police Department assistant chief Joe Johnson moderated the event and asked candidates a series of questions. Photo by: Jennifer Mosbrucker/Dispatch Staff

Editor's Note: Carolyn Sherrod was disqualified from the Ward 1 race after it was learned she resides in Ward 4.

With eight of the nine candidates on hand for Tuesday's Ward 1 city council candidate forum, the 100 or so residents who gathered at Townsend Community Center were given much to consider before going to the polls on Sept. 24.

From increasing the city's tax base through recruiting new business to reducing crime, removing blighted housing and supporting education, candidates appealed to their audience. There was even a reference to John Fogerty lyrics.

"I hope you'll vote for me on Sept. 24 so that on the morning of Sept. 25, I can go to the mayor and say, 'Put me in coach. I'm ready to play,'" said Ethel Stewart, borrowing a line from Fogerty's song, "Centerfield."

Referencing sports, particularly teamwork, was a common theme during the 90-minute forum, where candidates were given two minutes each to respond to questions provided by the audience.

"On a football team, you have a quarterback, but you also have to have 10 other players," Trent Bush noted.

"I'm a team player," said Stewart, former councilman Gene Taylor's sister. "There are a million things I'd like to do. As a team player, I feel like I can get a lot of things done."

Asked how the candidates would arrest the perceived state of decline in the city, much of the focus was on bringing businesses back to the community and Ward 1.

"One thing we have to talk is infrastructure and beautification, things that make us appealing to businesses," Lowery said. "We have to find ways to increase tax revenue, not only by bringing in new businesses but through home ownership. We don't have that many people who own their homes in Ward 1. We need to build that tax base, get the revenue flowing and then get to work on revitalization."

All of the candidates said they would work to bring new businesses into the community.

Holmes said that will require a different approach than in the past, however.

"Some things are out of our control," Holmes said. "Things have changed. Industries aren't coming into cities anymore. They're out in the county in industrial parks. So we have to change our approach, encouraging young people to be entrepreneurs and helping them with start-ups. We need to focus on the types of businesses that will work in our city and support those efforts."

Clinkscales acknowledged the challenges, but said part of the decline is a matter of perception.

"I do believe we have a perception problem," she said. "We need to build an image of Columbus that people can get excited about and support."

Jackson said his platform brings all those elements together.

"We have to do something about crime and infrastructure first," he said. "Then we need to focus on beautification and building communication. We all have to work together if we're going to move forward."

Morris said there is a different kind of infrastructure that also plays a key role in attracting new businesses and building the city.

Bush said the city needs to make sure it is taking advantage of grants available.

"I've seen what a good grant-writing program can do," Bush said. "The things we need, many of them, require funding and I believe there are still grant opportunities out there to be had. I'd be very aggressive in that."

All of the candidates vowed to stay in close contact with the people of Ward 1, each vowing to hold community meetings and be accessible to residents.

"You'll see me," Lowery said. "I'm not going to knock on your door looking for your vote now, then you won't see me for two or three years. I'll be out and about and ready to talk."