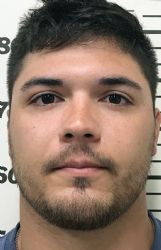 Dakota Husser, 23, of Biloxi, was arrested Tuesday on a misdemeanor simple assault warrant. He was one of dozens of college-age individuals in a Cotton District fistfight that was caught on video and has received thousands of views on social media.

The first person apprehended for the brawl was Nathan Cvitanovich, a 22-year-old Mississippi State University junior from D'Iberville. Cvitanovich was arrested Monday, also on a simple assault charge.

Husser is not a student at MSU, officials confirmed Tuesday.

In the video of the fight, a man can be seen yelling, taking his shirt off, throwing multiple people to the ground and punching some of them repeatedly.

Others in the video are seen throwing punches, pushing and shoving. Several people can be seen lying on the ground in the churchyard, and first responder vehicles can be seen in the background.

The incident is still under investigation and more arrests are expected, according to a Starkville Police Department Facebook post.

SPD has not provided the call and response times for Sunday's incident, and The Dispatch has submitted public records requests for the incident report and arrest affidavits.