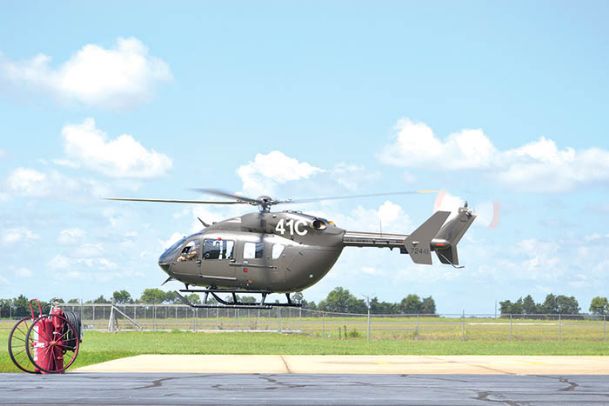 Since 2006, the Columbus plant has manufactured training aircrafts for the Army with the production of the UH-72A Lakota. With more than 200 employees corralled in the facility's delivery center, Airbus executives celebrated the Columbus branch and its success over the years.

"We are extremely proud of being a partner with Army Aviation in support of their mission in training pilots," said Mike Arrington, Airbus program manager for Lakota. "To our team, we could not do this without you. Every day you come in and you make a difference for customers. We are so proud to reach this milestone."

"Training the next generation of pilots is one of the Army's top priorities," Cabaniss said. "... I would like to thank you for your work and don't think that it has gone unnoticed. We always get pristine products and your track record has been impeccable."

Cabaniss has been working with Airbus since 2014 and said each product the Army receives from Columbus has been on time and often under budget.

"This has been great," Cabaniss said. "This program has been a model of success. It's really a model program that a lot of people in the military look to as an example of what you can do. In terms of impact of the local economy ... I'm sure (Airbus) had (an) impact on this area and a huge success for Mississippi."

Airbus is an international company with nearly 25,000 employees worldwide, including four locations in America. The Columbus location opened in 2003 and has more than 200 employees who manufacture two to three Lakota Helicopters each month for the Army. About 1,500 pilots have trained with the Lakota UH-72A helicopter. Other than the Lakota aircraft, the Columbus facility also manufactures H125 aircrafts and completes customizations for aircrafts. The Columbus facility produces up to 80 aircrafts a year.

For Mike Spears, the Airbus vice president of industry for North America, Columbus' contribution to the U.S. Army and Mississippi comes directly from its hardworking employees. Since the facility opened, Columbus has completed more than 1,300 aircrafts.

"When Airbus started here, there was a stigma about the South," said Spears, an Alabama native. "... 'You can't do complex things in the South' kind of thing. What you've seen over the years is you can. Most of these people are local, even though they are probably military. They have family here. We've accomplished a great deal. We contribute to the community by having employees that are very talented and dedicated. They make a fair wage so it contributes to the community."

In 2006, Airbus started its production of the Lakota aircraft and by 2018, the Army decided the Columbus-made aircraft would be the primary trainer for Army Aviators at Ft. Rucker.

"We've made it to 200 and it will be beyond," Spears said. "This is a significant milestone for us because we know what it means to train those aviators. They are training on an advanced aircraft which allows them to transition into the other aircrafts much easier. It's really just a significant milestone for us that shows what we have accomplished and where we are going."